The next chapter of the FIFA saga is less than a month away and EA officially dropped the ratings for the top 100 players earlier today.

The community has been patiently waiting for the ratings for FIFA 21 since all local leagues and international competition was on hold for most of the year due to the COVID-19 pandemic. 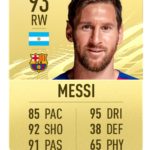 Lionel Messi (93) and Cristiano Ronaldo (92) were able to hold onto their No. 1 and 2 spots, respectively, despite getting knocked out of the UEFA Champions’ League before the semifinals. Though these top dogs of soccer kept their places, the previous runners-up from last year weren’t so lucky. 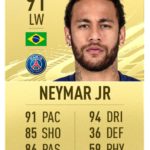 Both Neymar Jr. and Hazard received some rating nerfs. Though Neymar only dropped a single point (91) and fell to fourth place, Hazard wasn’t included in the top 20 players list with his rating of 88. The main reason behind this change is likely due to the injuries he endured throughout the season. Hazard missed a total of 26 games with Real Madrid during the last season, preventing him from performing at the highest level.

Despite not being able to lift the most prestigious cups this year, Manchester City’s Kevin De Bruyne was selected as the player of the year in the Premier League. It wasn’t that surprising for the midfielder’s fans, though, since he’s been showcasing a remarkable form throughout the year. It’s hard to match his effectiveness in the midfield and his efforts got him ranked two places higher than in 2019. Ranked in third place, De Bruyne rocks an overall rating of 91 and has his eyes set on the prize for the upcoming year.

One name that received a significant boost was the recent talk of the soccer town, Robert Lewandowski. The Polish striker has been performing phenomenally throughout the 2019-20 season and crowned his efforts with a well-deserved Champions’ League title. He’s ranked third in the power ratings with an overall score of 91.

Lewandowski and Bayern Munich’s performance throughout the highest stage of European soccer has been one of the most impressive runs lately. The team knocked some big names out of the competition with formidable scores, including a total of seven goals against Chelsea, eight versus Barcelona, and three against Lyon. Lewandowski scored six of those goals, which played an essential role in his increased overall rating and his performance throughout the year.

FIFA 21 is scheduled to release on Oct. 6 for the current-gen consoles. It’ll also release on Sony’s PS5 and Microsoft’s Xbox Series X/S later this year.