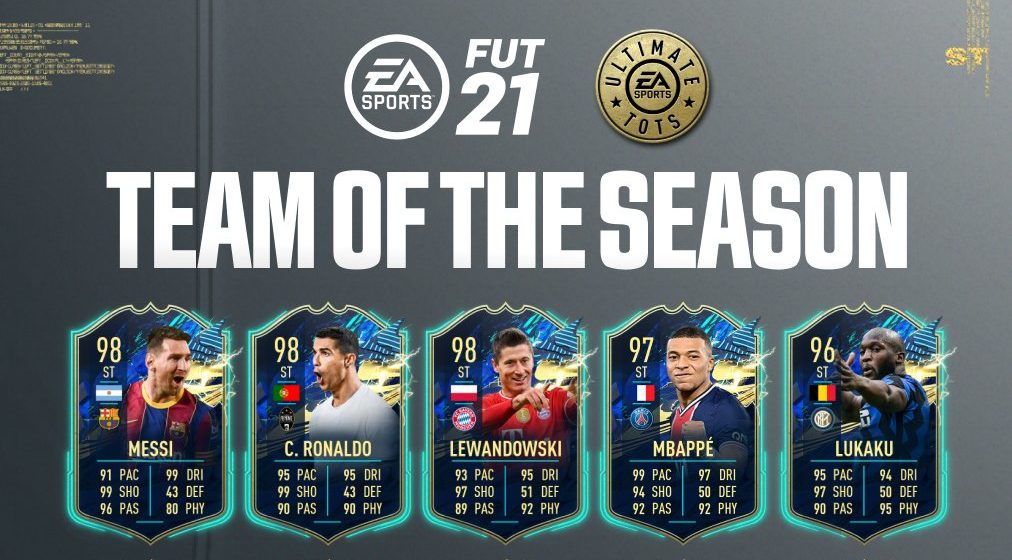 EA Sports added the final team of the Team of the Season (TOTS) promotion to FIFA 21 Ultimate Team today.

The Ultimate TOTS team has 15 players in total. It features the best players chosen by EA from previously released squads from the promo. The highest-rated players include 98-rated Lionel Messi from Barcelona, 98-rated Cristiano Ronaldo from Piemonte Calcio, 98-rated Robert Lewandowski from Bayern Munich, 97-rated Kylian Mbappé from Paris Saint-Germain, and 96-rated Romelu Lukaku from Internazionale.

This is equivalent to one of the major leagues released, such as Ligue 1 and Bundesliga. It will replace the Ligue 1, last week’s team, in FUT packs for this week. You can now get one of these 15 players in FUT packs for a limited time. All of the cards are incredible players as expected since the last team of TOTS is the ultimate one. The lowest rated player, for example, is 91-rated joão Cancelo from Manchester City, which is still a great card.

Here are all the Ultimate TOTS players who were added to FIFA 21 Ultimate Team today.

EA also added 93-rated TOTS Manuel Lanzini’s objectives today. Some other SBC players could be introduced over the weekend, but this marks the end of the TOTS promotion in FIFA 21 Ultimate Team.