As part of the next Challenger Pack, Min Min from ARMS is joining the Super Smash Bros. Ultimate roster and brings with her a new way to play at a distance.

Her entire moveset is based around the length of her powerful ARMS attachments, which give her incredible range and different abilities to help keep her opponents away.

Most of her moves are standard, especially in the neutral game. But the special stuff comes when you dive into just how versatile her ARMS can be.

Holding the A button, her left arm will stretch out for a quick attack. This has more distance than most basic hits and can be considered her Tilt Attack when you take into account the Side Smash is the same attack but much more powerful.

If you quickly tap the A button instead, she’ll attack with quick kicks instead of her arm, which can be useful for fast interactions. Her Up Smash is called the Somersault Kick. When timed correctly, it can also reflect projectiles from opponents.

All of her Smash and other movement-based attacks will also use kicks, giving her more options to deal with opponents outside of stretching her arms.

The normal, Tilt Attack version can also be used while moving or jumping, so it’s a great way to apply pressure on a retreating opponent or approach someone who doesn’t like playing in the air. The Smash variant can be used while in the air and both versions of the attack can be angled up or down at the end of the strike.

Once you switch over to the B Specials, that’s when you incorporate her right arm into the mix.

Using the Right ARM punch Neutral or either Side Special will send her right arm flying, while also using whatever special attribute is applied. This does mean you have a limited pool of actual special moves, but the character makes up for this in other ways.

You can extend both the left and right arms independently in the same direction or use them to cover both sides of the stage. And because of the range on these ARM attacks, you’ll never need to worry about getting countered. Sword users will have one less option to respond with unless you’re fighting Shulk and get too close.

Down Special is called ARMS Change. It will allow players to cycle through various attachments for Min Min’s right arm. You can rapidly change abilities without worrying about a cooldown and each different ability opens up a lot of possibilities. 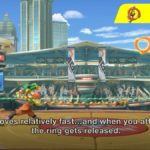 Just like in ARMS, you’ll grab your opponent at a distance using both arms, which can leave you open to attacks if you miss.

All three ARM variations will also give Min Min different neutral attack speeds, though the motion mimics Ike’s neutral where he makes a circle in the air with his sword. The Ramran will throw out a quick circle, while Megawatt’s is more powerful but slower.

Her Up Special is called the ARMS Jump, which is a standard recovery move that can be angled and adjusted for height depending on how you hold down the buttons.

Overall, Min Min looks to be strong against any character with a reliance on sticking to the ground that struggles to approach from a distance. Characters like Bowser, Little Mac, and others that need to reliably get in close will struggle when facing someone who’s competent at playing with the ramen chef.

She’s joining the roster on June 29, so get ready to pick up another unique character that’s going to change the stage control game.