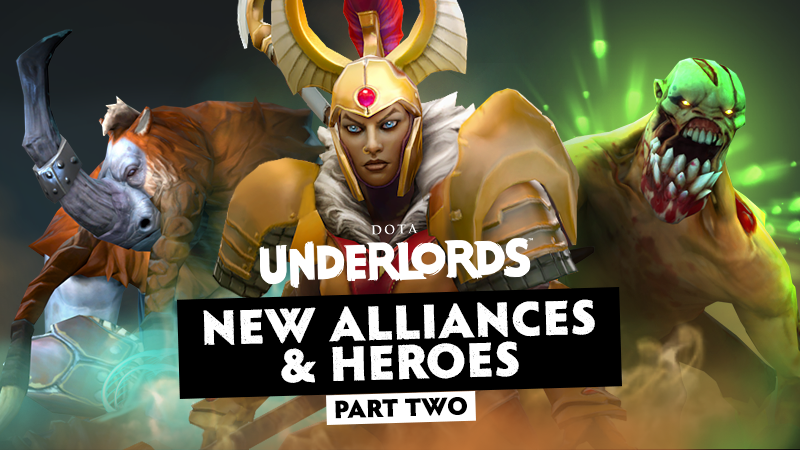 The big reveals continue for Dota Underlords. Two more alliances and three heroes have been unveiled.

Valve has committed to giving the community sneak peeks about The Big Update daily until its release. Today, the developers have brought in some muscle to complement yesterday’s lineup of creepy crawlies and healers.

Legion Commander stands in a league of her own, at least for now. She is the sole hero in the Champion alliance. Tresdin possesses the active ability Duel, her ultimate ability from Dota 2. It works similarly, with the Commander automatically targeting the lowest health target, who receives permanent damage.

Champions receive all alliance bonuses in the game, likely referring to any active alliances the player has. This means that Legion Commander could become a super-buffed single unit with bonuses from physical alliances such as Hunter and Assassin. Her Duel skill will only help to amp her damage potential.

Lifestealer and Magnus join the fight, creating the new alliance Brutes with Axe, Treant, and Doom. The alliance synergy allows Brutes to stack and debuff damage on a target but will force them to hit targets that haven’t already been marked—similar to Ursa’s Fury Swipes in Dota 2.

Lifestealer will be a hard hero to take down with his passive Feast ability, allowing him to deal damage based on his target’s maximum health and healing him in the process. Magnus comes with Empower, sending one ally into a rage to grant them additional damage and cleave. A hero with cleave with damage enemies in an AOE with their physical attack.

Valve will unveil even more changes tomorrow, so tune in for your daily Underlords fix.