The International 2022’s group stages began today, but the biggest discussion that doesn’t have to do with actual Dota 2 gameplay surrounding the event has been an ongoing point of contention since the regional qualifiers back in early September. PGL and its poor production.

With two events already in the books, fans expected PGL to really step up its game regarding production value once teams made it to TI proper. However, those expectations were quickly dashed as the panels remained mostly uninspired visually, gameplay suffered from low frames, and betting sponsors took up more room on screen than the actual talent at times.

With a viewing experience split between five different streams dealing with similar, or sometimes even worse issues, Dota fans have a right to be upset and are vocalizing it where they can—except for in PGL’s Twitch chat, since complaining might just get you timed out.

One significant voice in the discourse came from actor and Team Liquid substitute-extraordinaire Asa Butterfield, who questioned how a multi-million dollar event like TI11 could be absolutely dwarfed in production quality by events a fraction of the size.

Specifically, Butterfield pointed to L’Odyssée, an ongoing Super Smash Bros. tournament making its debut this weekend in Paris, France, emphasizing its player presentation, panel placement, and making the most out of the tournament organizers have available to them.

Meanwhile, at TI, fans have been treated to commentators with varying mic qualities casting from different locations and an analyst panel being critiqued by the fans for several reasons, including the fact that the set being used is just a curved table with a blurry background.

PGL’s decision to stream the event on its Twitch channels has also been a point of contention since it almost certainly came with a downfall in viewership. This is due to moving away from the established TI-specific channels, including the main page with over one million followers on Twitch, and some of the split streams being difficult to find.

In addition to the production issues, most pre and after-game discussions from commentators on the stream see ads bigger than the caster’s face cams. This doesn’t even consider that previous TIs rarely detracted from the games or analysts with ads or the deeper discussion on why it seems most Dota events can only pull sponsorships from betting companies.

The lack of dedicated studio space in Singapore and attention to detail for this group stage makes TI11’s production look cheaper than previous Major tournaments hosted by the likes of ESL, WePlay, and Beyond the Summit. 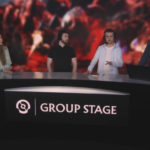 Like with most years, the real production value won’t come into play until the final 16 teams make their way into an actual stadium to compete live in front of a roaring audience in Singapore for the playoffs rather than on PC setups in a hotel room. But that doesn’t excuse just how subpar the last three TI-related events have been, at least according to the community.

Not a great look, especially after Valve just reaffirmed its commitment to the competitive Dota 2 scene.