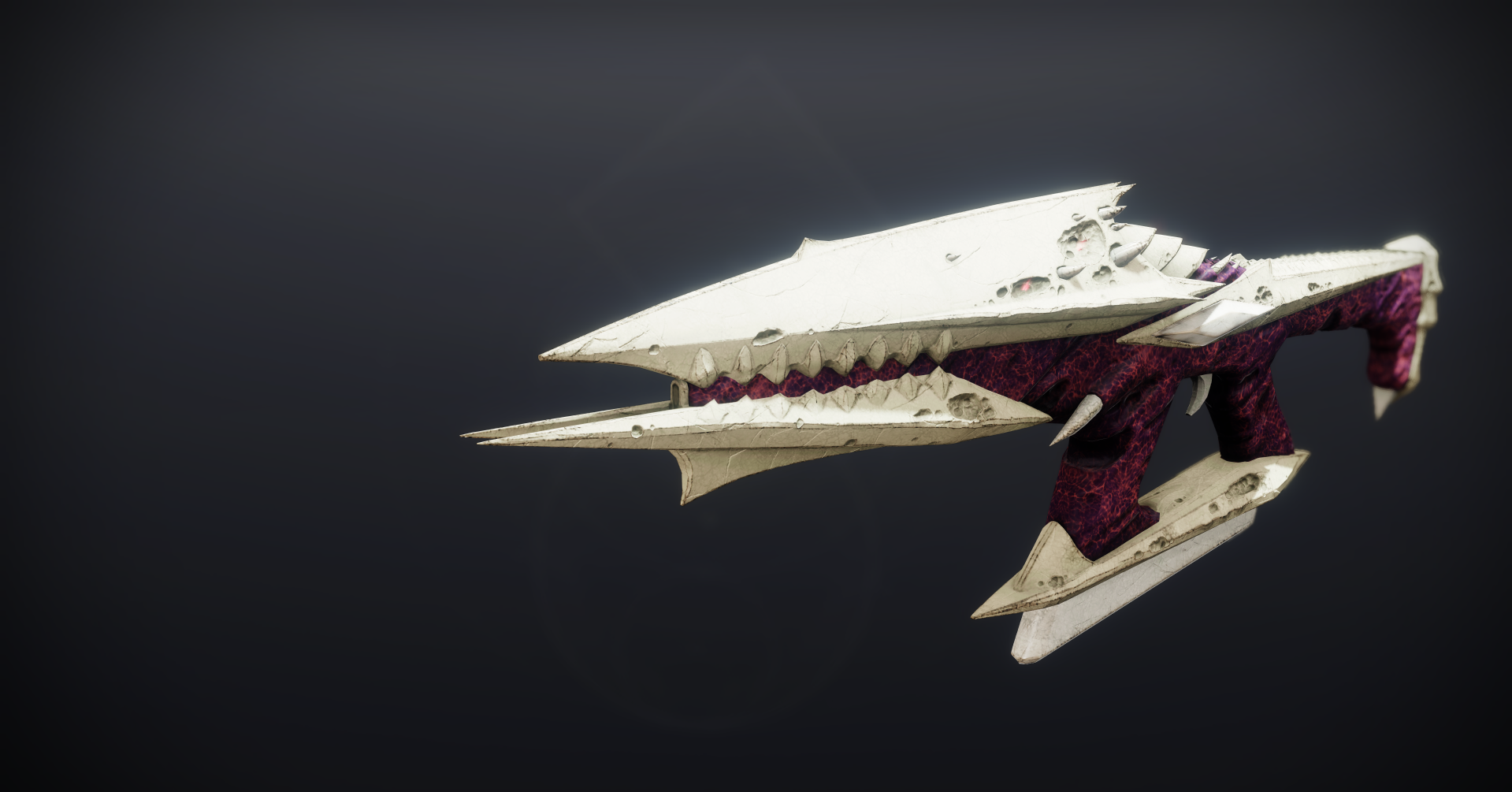 A new High-Impact frame fusion rifle in a meta dominated by shotguns and grenade launchers can be a tough sell, but Midha’s Reckoning, reintroduced to Destiny 2 via the refurbished King’s Fall raid, is making a strong case for itself with a mighty pool of perks.

Despite the Rapid-Fire and Precision frames benefitting most from the rework to fusion rifles last year, the damage potential of High-Impact frames can still be viable in both PvE and PvP content for players willing to shoulder the increased charge time. This is especially true for Midha’s Reckoning, with the Runneth Over origin trait featured on the King’s Fall weapons offering a major power increase to what is already the best fusion rifle perk for PvE: Reservoir Burst.

When the magazine is overflowed by Runneth Over, each shot in that overflow will be a Reservoir Burst shot, giving it consistent and impressive area-of-effect impact against large groups of enemies. Reservoir Burst’s power on Midha’s Reckoning is a boon that otherwise makes the majority of other perks in the second column pale in comparison. Still, Midha’s Reckoning being a craftable weapon means you won’t need to rely on luck to secure it.

The discussion around the fusion rifle’s place in PvP is a lot more complicated, but with many options for decreasing the High-Impact’s base charge time to something that feels more viable against the shotgun-wielding Guardians, it’s still possible to craft a roll that will fit into a comfortable spot for those who enjoy the range and damage potential fusion rifles provide.

Here’s our breakdown of the best perks to utilize on Midha’s Reckoning in both environments, as well as the god rolls you should be chasing or crafting.

With Reservoir Burst being a go-to pick for any PvE god roll, the ideal build depends on a complimentary perk in the first column. Field Prep isn’t a flashy choice, but it is effective, giving you more ammo to work with and easy access to faster reloads in the heat of combat. Working in tandem, the build will allow you to keep Reservoir Burst’s effect active for far longer, empowering more of your shots with the perk’s explosive capabilities.

Battery and barrel choices on a fusion rifle often come down to personal preference, but High-Impact frames already benefit from a significant range and damage advantage over other frames, allowing players to explore options that provide additional stability or recoil control.

This doesn’t prevent Liquid Coils from remaining a great choice for those willing to sacrifice some charge time in PvP, especially with perks like Backup Plan and Successful Warm-Up able to bring the charge time back down again, but it’s up to personal preference. These choices are a microcosm of why the PvP god roll is so flexible, giving players two paths: slowing the weapon down and enhancing the damage or making it fast but with a short effective range.

The perks featured in the god rolls of Midha’s Reckoning may be clear outliers in their pools, but there are still other options available that may cater to more niche playstyles or benefit a specific use-case for the fusion rifle.

With Reservoir Burst’s position as the top perk on Midha’s Reckoning, Field Prep is an incredibly useful utility perk with its offering of additional reserve capacity. With how quickly players will burn through special ammo trying to get the most out of the explosive potential of this fusion rifle, having a little bit more inventory to spare can be a game changer. The bonuses to reload and readying speed when crouched are also nice.

Well-Rounded has struggled to make much impact as a perk since its introduction, but in the wake of limited options for the first perk column, it does have some potential on Midha’s Reckoning. Giving a boost of 10 to the range, stability, and handling with each stack gained through an ability, Well-Rounded could give you the edge in PvP. While the cost of a full ability cooldown may seem high, few perks in this column offer a similar safe option for the Crucible, making it worth experimentation at bare minimum.

Pugilist’s place on Midha’s Reckoning seems to set up synergy with Swashbuckler perfectly. But with no Swashbuckler to be seen on the second perk column, it instead struggles for prominence against other perks that better compliment the likes of Reservoir Burst. Players building heavily into their melee may still want to pick this perk up to fit their playstyle better, but it’s otherwise hard to recommend.

The heavily decreased damage while Backup Plan is active can ward off players from picking this perk up, but when you’re stuck in a bind, the 30 percent buff to charge rate can catch any unsuspecting opponent off-guard. If messing with the muscle memory of the fusion rifle’s normal charge rate will cause more harm than good, perks such as Field Prep and Well-Rounded may be a better choice, but Backup Plan remains one of the strongest choices for PvP where the speed can be necessary to compete with shotguns.

The faster charge time that Cornered provides, coming at no cost to damage, makes it an obvious choice if Field Prep isn’t your perk of preference for a PvE build of Midha’s Reckoning. With Surrounded also available alongside Reservoir Burst, and both perks being designed for use against large groups of enemies, Cornered is a natural fit with a lot of synergy.

Unrelenting and Hip-Fire Grip struggle to leave an impression in an otherwise fairly competitive column of perks, with niche benefits that tend to leave a lot desired. Hip-Fire Grip has a bit more utility because aiming down the sights with a fusion rifle is rarely needed, so the benefits to accuracy and stability can be consistently exploited. Unrelenting’s weaknesses mostly span from the prevalence of healing and sustain brought on by the 3.0 rework of the Light subclasses, which make a perk built around healing the player mostly irrelevant.

Reservoir Burst was already a powerful perk on fusion rifles before Midha’s Reckoning, but the Runneth Over origin trait takes Reservoir Burst to a new level of potency. When playing in PvE, an overflowing magazine means endless explosions against group combatants as long as there are teammates nearby.

Like Cornered, Successful Warm-Up’s strengths come from the fact it can increase the charge rate without sacrificing the damage output of Midha’s Reckoning. It’s a sizeable bonus, offering a 37.5 percent increase for at least six seconds. It’s still difficult to compete against Reservoir Burst in PvE, but the PvP potential is akin to Kill Clip or Rampage on other weapons in its effectiveness.

Vorpal Weapon fares best as a perk on weapons often used against Champions or bosses, neither of which is the usual victim of High-Impact fusion rifles. However, having a roll of Midha’s Reckoning with Field Prep and Vorpal Weapon for seasons where fusion rifles have a seasonal anti-Champion mod isn’t a bad choice.

The two more traditional damage perks on Midha’s Reckoning are nothing to scoff at, though it’s rare to see damage-boosting options so low on the list of recommendations for a god roll. However, pairing Surrounded with Cornered or Golden Tricorn with Well-Rounded can offer great synergistic rolls to defeat powerful enemies such as Champions. Golden Tricorn especially can grant a massive 50 percent damage increase if the perk is activated fully. First with a weapon kill and then with an ability kill that matches the weapon’s Arc energy type.

Tap The Trigger and Kickstart

Tap The Trigger is a ghost of its former self, nerfed heavily on fusion rifles specifically after the dominance displayed by the likes of Main Ingredient in previous iterations of the Crucible. It can still be potentially useful, with a good boost to accuracy and stability on the trigger pull, but its heavily weakened effects make it a harder choice to recommend.

Kickstart is quite powerful in comparison, but it requires a lot of setup not traditionally afforded to fusion rifle users in PvP. Sliding after a sprint for a bonus to damage and charge rate speed isn’t a combination of buffs a fusion rifle tends to get, so if you can make it work and position yourself to be able to pounce on unsuspecting players with it, Kickstart could prove to be a deadly asset in the second perk column.