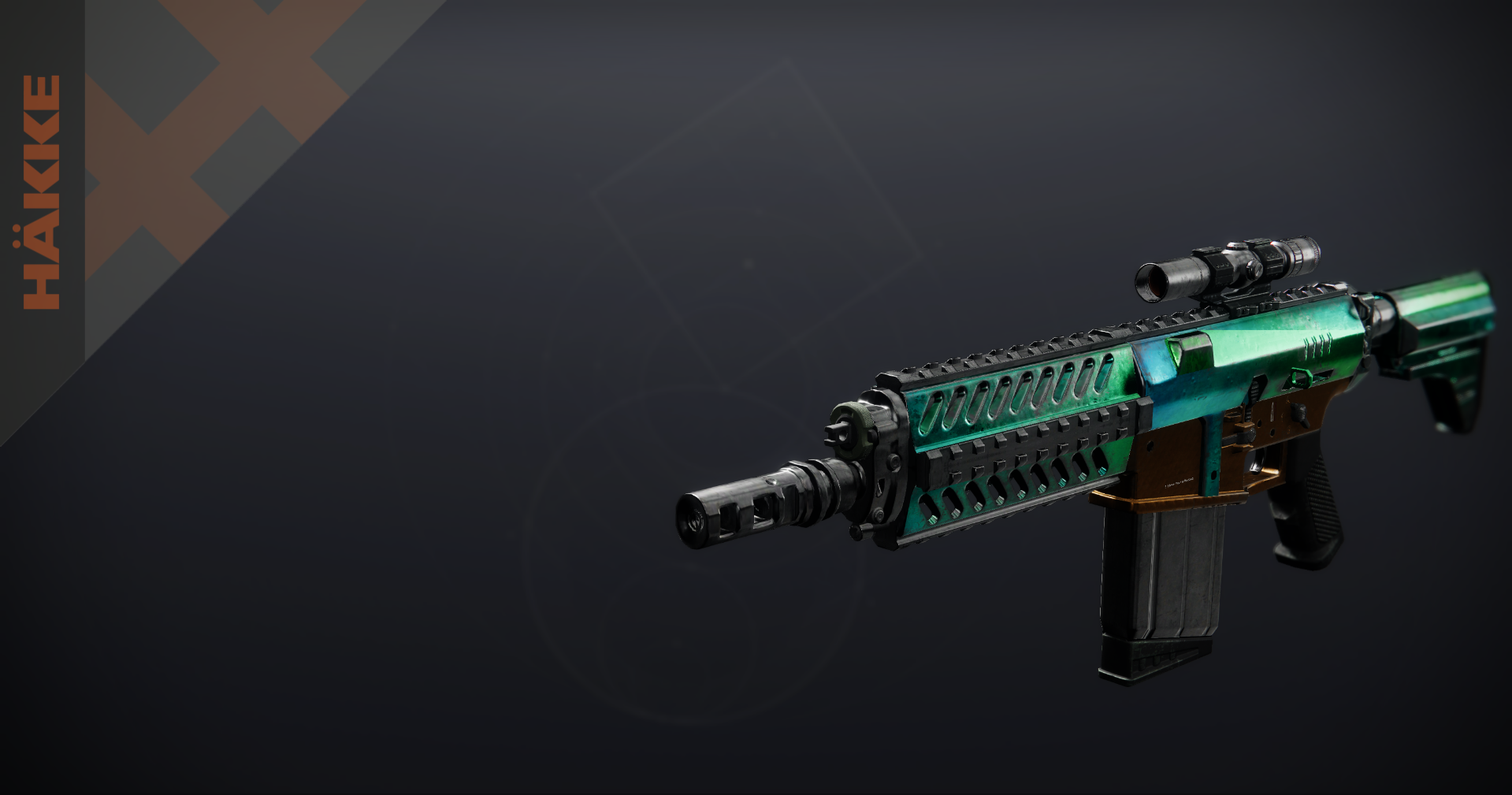 When it comes to Stasis Primary weapons in Destiny 2, guardians have a wealth of options to pick from, each with its own strengths and weaknesses. The Herod-C auto rifle is part of this growing list, and its position as a loot drop from the end of Gambit matches (with the possibility of focusing Gambit Engrams into it starting in season 17) makes grinding for a good roll an easy ask. The high-impact 360 RPM class of auto rifles that the Herod-C inhabits isn’t necessarily the most popular historically, but its range and steady recoil make it perfect for its intended function: long-range engagements and killing Gambit invaders.

The Herod-C is a flexible weapon with promising perks for both PvE and PvP scenarios, but it truly shines within the Gambit ecosystem. This is thanks to its unique Origin Trait, Invader Tracker, which allows the wielder to mark an invader for their allies by simply damaging them with the weapon. In the heat of an invasion, where finding the invader can be hard enough without adding the struggle of communicating with random teammates, the Herod-C can make your defense a little bit easier. But if you’re taking the rifle into activities beyond the Drifter’s ship, you can switch to its second Origin Trait option, Hakke Breach Armaments.

Herod-C has a lot of perks—12 in both perk columns, in fact—which can make it a nightmare to farm, but the potential rolls are a worthy reward. With old favorites next to new kids on the block like Headstone and Focused Fury, Herod-C has a god roll for every type of player. And if 100 matches of Gambit and praying for the miracle of a good drop doesn’t quite sound up your alley, season 17 brings ability to focus Gambit Engrams into Herod-C drops at the Drifter for a more relaxed farming experience.

There are a lot of paths to take the auto rifle down, but here’s our god roll for Herod-C in both PvP and PvE:

Herod-C already enjoys some powerful range at its base level, so much of an ideal roll is best built around enhancing its other departments. The PvE god roll is about uptime, capitalizing on the presence of Subsistence in its perk pool to keep the weapon firing for longer against the crowds of enemies typical within Strikes and Battlegrounds. Damage-boosting perks such as Frenzy are a perfect complement to it, since a quicker time-to-kill only makes Subsistence even more valuable and effective.

While 360 RPM auto rifles are not traditionally taken into PvP environments, there are still plenty of perk choices that can construct a heavyweight contender in the Crucible. Herod-C’s lack of Rampage or Kill Clip means the choice of perks instead centers around stability and consistent precision. Guardians equipped with Tap The Trigger and Dynamic Sway Reduction can expect to be a tough force to reckon with at medium-to-long range for any other type of weapon.

However, the Herod-C has a deep and diverse pool of perks to dive into. Not every perk is god roll material, but there are still many options for players that love to indulge in more niche playstyles. Here’s each of its notable perks and the best picks among them.

Perpetual Motion and Stats For All

Though 360 RPM frame auto rifles can feel bulky to wield compared to their popular 600 RPM counterparts, the Herod-C’s choice of Perpetual Motion and Stats For All offers avenues to improve many of its base statistics. Perpetual Motion’s ease of activation from the simple act of sprinting makes it an obvious choice for anyone who wants a bit of extra stability, handling, and reload speed to work with in environments like the Crucible, where hitting three targets quickly is hard. But a PvE-centric Herod-C can benefit heavily from Stats For All, with even more impactful boosts than Perpetual Motion and its activation requirement of three targets shot being a breeze in PvE activities.

Both of these perks ultimately achieve the same end goal of returning bullets to the magazine. Your choice between them comes down to personal preference, but Subsistence offers more for less to players that aren’t often hitting the precision shots necessary for Fourth Times The Charm’s effect. Herod-C won’t burn through bullets as quickly as Krait or The Summoner, but when facing Champions or other powerful foes, having a few extra bullets before needing to reload can’t hurt.

Heating Up takes a backseat in Herod-C’s perk pool in the face of Dynamic Sway Reduction sharing the first column, but it’s a comfortable option if you happen to get a drop with it instead of more optimal perks. Herod-C’s long-range capabilities mean getting a safe final blow to activate Heating Up is very doable and the benefits to accuracy, stability, and recoil can make you a menace on the battlefield. But ultimately, Dynamic Sway Reduction’s benefits to the accuracy and stability of the rifle are so much easier to activate that it’s hard to compete against it.

These are two perks for Herod-C that best fit to a roll of the weapon intended for endgame content. When paired with Vorpal Weapon or One For All in the second column, Herod-C becomes a great safe option to exploit against targets from long range. Auto-Loading Holster is a quality-of-life perk, but Shoot To Loot is a great fit for a weapon like Herod-C that can hit ammo bricks with precision from the kinds of distances that make the perk worth using over simply walking over the ammo brick instead.

Steady Hands is a less conventional choice for the first column, but offers a nice quality-of-life benefit to Guardians who regularly switch between their three weapons in combat. Kills providing handling boosts to all of your weapons can be a boon in scenarios where those weapons have slow handling to begin with, such as rocket launchers or High-Impact Frame fusion rifles.

Multikill Clip is most likely going to be the most comfortable damage perk for most players on Herod-C. While the perk needs three stacks, all acquired through rapid kills, to reach its maximum potential, that maximum potential is an unmatched 50 percent damage boost for five seconds. The number of kills required can make it a hard perk to fully utilize in PvP, but even a single kill can give the wielder a decent 17 percent boost that can change the outcome of further battles, and getting two kills before reloading puts it at the same 33 percent as Kill Clip.

Frenzy and One For All (PvE)

Herod-C’s damage-boosting perks are somewhat limited, but Frenzy and One For All are both deadly choices for a PvE build. Frenzy’s passive benefits and effortless activation costs make it a hard perk to contend with, but One For All is easy to proc and offers a 20-percent bigger boost to damage for its duration (35 percent from One For All against 15 percent from Frenzy). The best choice for a Guardian between these two contestants may just come down to the barrel and magazine that the Herod-C comes with, since Frenzy’s additional benefits to handling and reload speed might outweigh One For All’s powerful damage if you’re limited by a lack of innate utility.

Demolitionist is a tried-and-true option for any grenade enthusiast in the Vanguard’s ranks. Players who are ability-minded may find Demolitionist to be a better option for them over the more traditional damage perks, especially with the potency of grenades in Stasis subclasses or in the 3.0 iteration of the Light-based subclasses.

Herod-C continues the tradition of Stasis weapons in the Kinetic slot offering the Headstone perk. Headstone is a niche option that might only be beneficial to those who enjoy the Stasis subclass, but it brings potential with the right Fragments and Aspects. With certain Stasis builds giving benefits like damage reduction, ability energy, and even an overshield when collecting Stasis crystals, Headstone’s crystal generation can have an unexpectedly major impact.

Stasis primary weapons are becoming a more and more popular choice for players in endgame content, outclassing the damage of traditional Kinetic weapons against the thick combatant shields in high-level Nightfalls. Vorpal Weapon is perfectly suited to this kind of environment, offering a passive damage bonus against the Champions and minibosses that players encounter throughout Master and Grandmaster difficulty strikes.

These two perks serve the interest of Crucible opponents looking for a new choice of primary weapon to take into Shaxx’s arenas. Since Herod-C’s damage perks aren’t well-suited to PvP due to their less-ideal activation requirements, a good PvP roll will want either Tap The Trigger or Moving Target to instead enhance the weapon’s general accuracy. The choice between them ultimately comes down to personal preference or just whichever perk you’re lucky enough to roll post-Gambit match, but the bonuses to target acquisition, accuracy, and stability will be powerful regardless.

Focused Fury is a niche damage-enhancing option for players who feel confident enough in their shot to hit the needed half a magazine of precision hits to activate it. The perk’s 11-second duration outclasses anything else like it, but it’s only a 20 percent boost compared to One For All’s 35 percent and Multikill Clip’s 50 percent at max stacks. Like Fourth Times The Charm in the first column, Guardians can get a lot of value out of this perk if they happen to get a drop of Herod-C with it, but there are potentially better choices to farm.