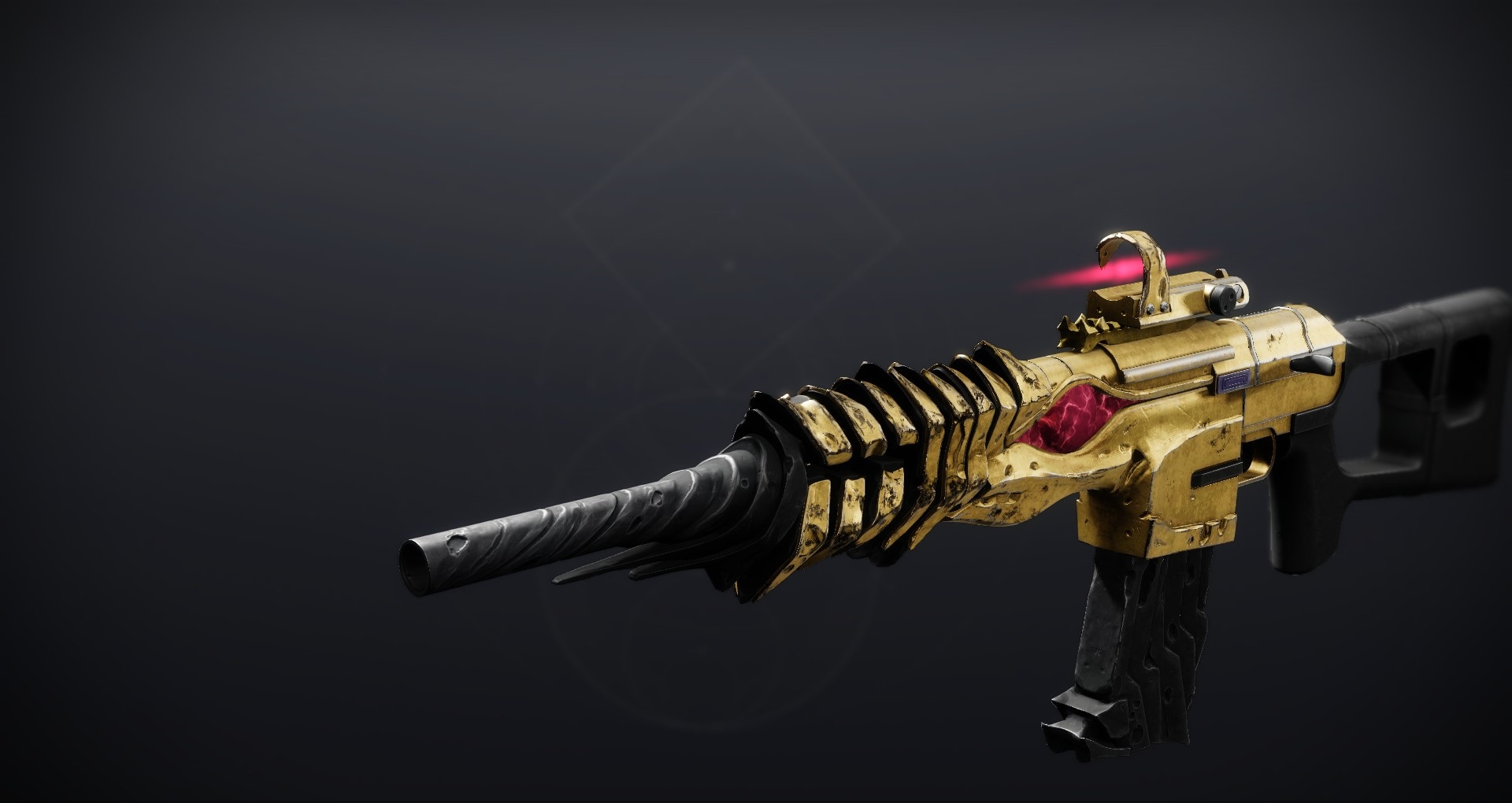 Destiny 2’s Season of the Haunted brought players a suite of new weapons with the Haunted aesthetic, boasting an astonishing gold color and supernatural details. Firefright might be one of the most impressive of the bunch, pairing that unique visual with an incredible sound design and a sight inspired by the Osteo Striga Exotic SMG.

Firefright doesn’t really leave much room for playing around with its perk pool and there is little variance between the god rolls for PvE and PvE because of it. Arrowhead Brake is a must to offset its poor recoil direction, though you can get by with any other part if you can get used to its kick. Firefright’s base reload speed and magazine size are good enough that you can spec into High-Caliber Rounds without feeling like you’re missing out, and the extra flinch is helpful across both PvE and PvP.

For the PvE god roll, you’ll want Fourth Time’s the Charm to improve ammo sustain or Threat Detector if you anticipate you’ll be within 15 meters of an enemy often. The two best-in-slot perks on the fourth column are Adagio and Surrounded since they’re Firefright’s main way of boosting damage. Each of them also synergizes with its perks: Adagio boosts damage and reduces fire rate with no effect on recoil, which makes it easier to chain precision shots for FTTC. Likewise, Threat Detector/Surrounded is an established combo and one that Firefright can also benefit from. The lack of Rampage or Kill Clip on Firefright, however, really hurts this weapon.

Firefright struggles in PvP for the same reasons it doesn’t perform as well as it could in PvE. It doesn’t have access to the most common perks for the Crucible, and none of the other alternatives really screams PvP either. What you can do is boost some of your weapon’s stats through Well-Rounded, Fragile Focus, or Threat Detector (all of them with fairly flimsy triggers) or with Elemental Capacitor, though that last choice negates a damage boost.

If you can’t yet craft Firefright and have to make do with the rolls you can get, or if you’re wondering what you should craft, here’s a breakdown of Firefright’s perks so you can settle on your own god roll.

Fourth Time’s The Charm is a classic, and you can’t really go wrong with it in Firefright. Every fourth precision shot you hit returns two rounds to your magazine, which means you can fire for longer and continue to chain your damage buffs. This works particularly well with Adagio.

Threat Detector boosts your weapon’s stability, reload, and handling when within 15 meters of enemies, which can happen fairly often with auto rifles. Though it’s more common to see them on SMGs, this isn’t a bad choice for Firefright—mostly because of the lack of anything better.

Well-Rounded works well for guardians who frequently throw in their abilities, giving up to 20 extra range, stability, and handling. Since it requires an ability, however, you may not see that much uptime on it depending on your builds, though all classes have their own way of stocking up on ability energy. It’s not a bad choice if it fits your playstyle.

Fragile Focus is kind of a quasi-Opening Shot, giving you extra range until you take damage. It could work somewhat decently in PvP, though in PvE, taking damage is hardly the end of the world and there are better options for this slot.

Air Assault emerged after Bungie reworked Air Efficiency to tweak aerial gunplay in the Crucible, but Bungie layered a niche trigger on top of a circumstantial perk. Air Assault improves Airborne Effectiveness based on missing health, which means you have to be at low health and in the air to gain the most out of it. And that’s without discussing the questionable efficacy of 450rpm autos in the Crucible.

Hip-Fire Grip helps you land shots more often without aiming down sights. It’s a niche perk (outside of Exotics like The Last Word), and it usually goes ignored unless in extremely specific scenarios. The bright side for Hip-Fire Grip enthusiasts is that Firefright doesn’t really offer any major perks such as Outlaw or even Demolitionist in this column, which means you can feel less guilty about picking it as long as it fits your playstyle.

Adagio is usually close to the top perks, but it’s rarely at the top. Since Firefright doesn’t have access to Rampage, Kill Clip, Frenzy, Swashbuckler, or One For All, however, Adagio is up there on the list for lack of an objectively better option. Adagio also has a special flavor on Firefright, bringing its fire rate in line with a 360 auto rifle without giving it the major kick that comes from the archetype. If you like firing a 360rpm but don’t like the dreadful recoil that comes with the archetype, you’ll be pleasantly surprised with this.

Surrounded offers a hefty damage boost, especially with the Surrounded Spec mod. It also has a fairly tricky trigger, activating whenever you’re within eight meters of three or more enemies. Since auto rifles favor medium and long-range gunplay, you may not get as much use out of it as Surrounded gets, for instance, in SMGs or even fusion rifles, but it will do wonders for you if you can make it work. Adagio, however, has a far easier and more consistent trigger.

Focused Fury is a great perk for snipers or linear fusion rifles, but its effectiveness wanes with bigger magazine sizes. Activating Focused Fury requires you to land 17 critical hits, which may be fairly convoluted. It’s not a bad perk if you can keep it up, but there are easier ways to get more benefits out of it.

Osmosis is one of those perks that guardians either swear by or ignore completely. Transforming your Kinetic into your subclass’ element had little use previously, but the 3.0 reworks for the Light-based subclasses drastically improved its efficiency. You can activate subclass synergies without spending your Energy slot on a matching elemental weapon, and if you can keep up grenades often enough, you’ll get a good amount of benefit from Osmosis. This can be good if you know what you’re doing, and the opportunity cost of picking it isn’t as steep in Firefright since Osmosis isn’t really contending with top-tier perks like Rampage or Swashbuckler.

In weapons with scarce ammo, Mulligan can be essential, and its synergy with Whisper of the Worm is part of what makes the Exotic so special. Firefright doesn’t really need that much benefit from it: 34 rounds in the magazine mean you can afford to miss a few shots, and since Primary ammo became infinite, there’s no need to count bullets. You can make a gimmicky, entertaining build with Fourth Time’s the Charm and Mulligan, but there are better choices here.

Elemental Capacitor offers you bonuses based on what subclass you’re running. Though that means you’ll always get some benefit out of this perk, it also means your mileage will vary greatly if you switch subclasses. If you know what you’re looking for in PvE and don’t mind having a different gun after switching subclasses, then Elemental Capacitor may not be bad for you. For the Crucible, however, Elemental Capacitor gets even more value due to the dearth of better alternatives.