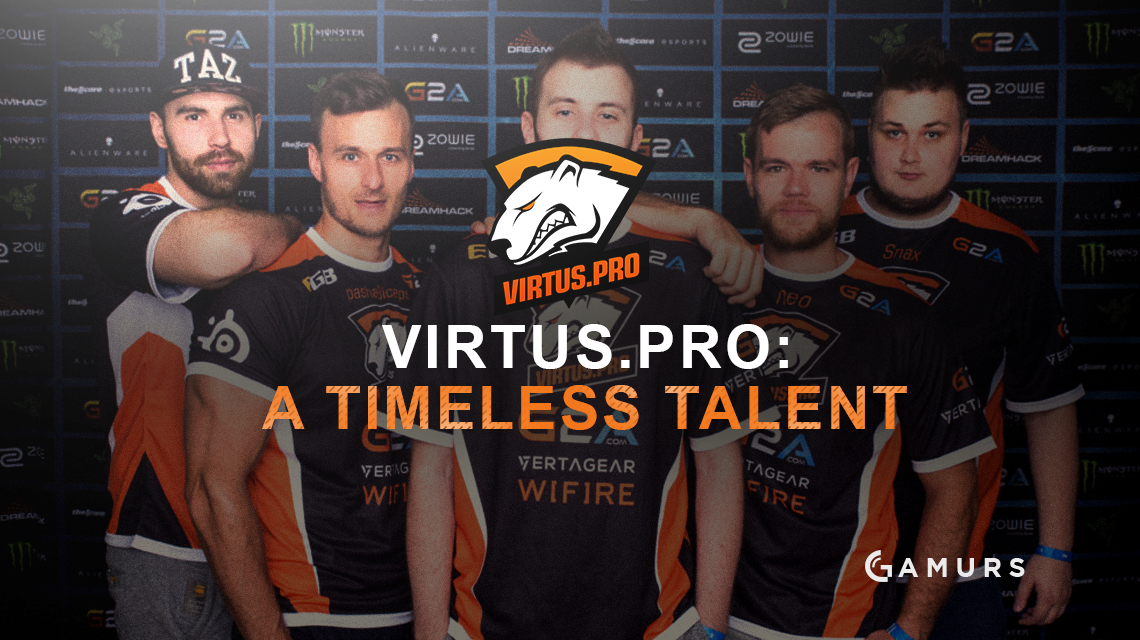 Through the ebbs and flows of professional Counter-Strike, there has been one team able to remain at the top of their game. From the inception of the five-man Polish roster we know today, the name Virtus.pro has always been one that is frequently seen winning championships, a trend they have kept going for a staggering two and a half years. The Poles are a remarkable story due to the fact that no matter how low they seem to have slumped, or how long their dry spell for a win is, they can always burst back into the top of the professional scene.

We seem to be midway through a resurgence of Virtus.pro (VP), as their form has been steadily increasing over the last few months after the catalyst result for them that was ELEAGUE Season 1. After claiming victory in Atlanta, as well as $400,000, VP has been racking up more and more impressive results, despite not going through any noticeable changes since their slump. Unlike most teams that show improvement, or a lack of it, after roster changes, Virtus.pro remains the only team that suffers the lows without roster changes and then climb to unimaginable highs with a lineup that was slumping not long ago.

There really is no other team in the world that has the inconsistency, yet the potential for success and failure, like Virtus.pro. It’s mind-boggling how VP can lose 16-6 to FlipSid3 in a game where Filip “neo” Kubski only killed five players. It’s crazy that this same game, that took place in April of this year, was the final nail in the coffin of a season VP had, only winning four games out of 22 played in the ESL Pro League.

For them to then go and win the first televised Counter-Strike event only three months after their calamitous season in the Pro League throws all logic out of the window, especially considering they used the same lineup. The only reason I can find for why Virtus.pro can lie dormant and then wreck any team on the planet is that they’re a timeless talent. For as long as they continue to play professionally, VP will be a contender for the title of the best.

And herein lies what makes Virtus.pro such an enigma. Their current lineup is the same one they won the Valve-sponsored ESL Katowice with, in 2014. It’s also the same lineup that managed to get relegated at the end of ESL Pro League Season 3, and however much you may discredit online games, a team that shows flashes of being the best in the world should be able to finish a league with more points than FlipSid3 Tactics. So, how exactly has Virtus.pro managed to come from the bottom of the Pro League to one of the top three teams in the world without any visbile changes?

One clear factor that’s been helping them climb back to the top is the unreal level that Janusz “Snax” Pogorzelski has been playing at. Epitomised by his masterful 1v4 pistol-round clutch that remains one of the best plays in a clutch position I’ve ever seen, Snax has been a consistent star in the team’s recent rise. This clip alone says everything I’m trying to say about Snax as a player. In a swift 20 seconds, Snax decapitates four of the best players in the world, while on a grand final stage, facing what should be have been an impossible scenario to win. This legendary clutch has all of Snax’s qualities in it: his ability to find himself behind enemy lines, a godly aim and the ridiculous composure he exhibits afterwards, as his teammates look around in awe of what they’ve seen. I’m confident to say no one else could have played that situation like Snax did.

Pogorzelski ended the grand final of ELEAGUE Season 1 with an average of one kill per round, a brilliant performance that certainly helped the Poles defeat Fnatic and begin their ascent back up to their real potential. The Polish star also had a typically great performance at ESL One New York, a prestigious event his team only just failed to win. He top fragged for VP, even though they lost, once again in the frand finals, a trend that becomes more and more predictable the better Snax gets. VP’s performance increase isn’t all down to Snax by any means, but he’s certainly helped by making godlike matches his norm.

Other reasons for Virtus.pro’s improvement are lost on me. It seems that, for now at least, I will have to sit and watch in amazement as VP shocks the world with their lineup that has been together for years, another oddity in Counter-Strike.

The highly anticipated EPICENTER: Moscow tournament is set to take place tomorrow, and Virtus.pro finds themselves as one of the many top teams in attendance. It’s already been established that this tournament will serve as the decider on who is the best team in the world right now, as all of Na’Vi, SK Gaming and Virtus.pro are attending. Our own Max Melit covered the importance of this event in terms of the scene’s hierarchy in a good article of his. However, I think it’s worth re-iterating the weight of this event for Virtus.pro.

Plagued by inconsistency, EPICENTER, above all else, gives Virtus.pro a chance to show that the strong results they can, and have, been showing aren’t just because of momentum. Tournament wins at ELEAGUE and DreamHack Bucharest, as well as placing second at ESL One New York, only prove so far that Virtus.pro are in form. Besting Na’Vi and SK Gaming at another event filled with talent will show that the veterans in VP can still rule this scene like they did for a while in 2014.

We’ve seen that their lineup can recreate the power that it showed around the time the team won ESL Katowice 2014 with their recent results. VP has shown from their resurgence that their talent is timeless, able to win in both 2014 and 2016, and don’t resort to lineup changes when they’re slumping like other teams. It’s an unconventional thing to do, but it’s worked so far for the Poles, so EPICENTER will make for a hugely entertaining tournament as we spectate three gladiators fighting to the death for the title all of them desire. For VP, it seems more spectacular if they win, however, as they have sat on the sidelines of greatness for too long with too talented of a lineup. It’s time to see if they can cement their proven lineup as the best in the world.

What are your thoughts on VP’s success over the past several years? Let us know by commenting below or tweeting us @GAMURScom.