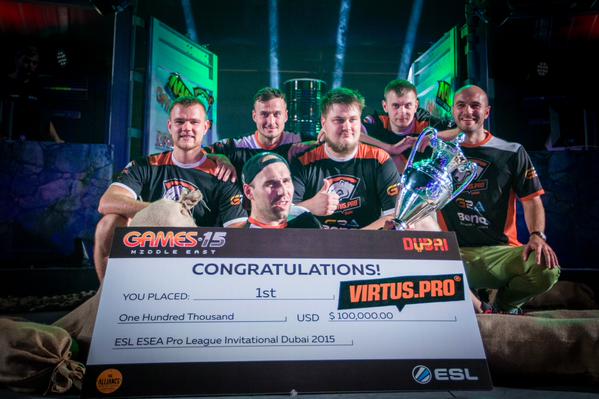 A tournament full of the unexpected leads to a Virtus.Pro victory over TSM in the finals at ESL Dubai. The series went down to game 5, round 30 as the Polish clutched up to win the last map 16-14. They will be taking home 100k.

To start off the series, TSM vetoed Cache because of how dominant VP had been looking on that map during all their matches. In a controversial decision, VP vetoed Inferno instead of their usual choice and weakest map, Dust2. The final mapset was Overpass, Train, Dust2, Cobblestone, and Mirage, in that order.

It didn’t look good for TSM going into Dust2, even though they were regarded as the best at the map. VP did not veto the map, so it would seem that they had something up their sleeve. However, that was not the case; TSM came out as dominant as ever on their counter-terrorist side. They took the map dominantly 16-3.

VP, being the veterans they are, stayed calm and dominated the Cobblestone game. Snax went 29-14 and controlled the match, while his teammate Byali only died twice in the game with 10 kills. The final score of this game was 16-7.

The analysis desk said that the last map, Mirage, was the closest in terms of skill of the two teams. Virtus.Pro are known for their amazing terrorist side, and TSM for their CT side. Virtus.Pro started off on the counter-terrorist side, and they made themselves look like the best in the world. They took the half 12-4 and the game looked done and dusted. This is where TSM kicked their game up into high gear. They played near perfectly, bringing it back to take the lead at 14-13, including a 2-5 clutch by Device and Xyp9x. Virtus.Pro did not let it end there. They won the next three rounds to finish out the tournament in dominant fashion.

Virtus.Pro won and afterward Taz had this to say about the last map and victory, “There was not much talking, mainly just calming down each other, it was a team effort all the way, and from tactic point of view. As a team we win, as a team we lose. This time we are the champions”

Virtus.Pro had to take down NiP, who were on a hot streak, Fnatic, the best team in the world, and TSM, a top 4 team in order to take the impressive trophy at ESL Dubai.