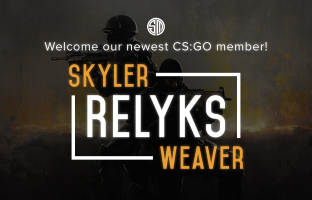 Relyks is replacing Timothy “autimatic” Ta, who was a part of the original TSM made up of a mix of players from different organizations, such as compLexity Gaming. autimatic was their most consistent player that kept them in the game, so players like the prodigy twistzz could come out and frag.

The flipside of the story is Relyks remained as the last Enemy player of the team. In the transition for Selfless, he was a consistent player for them, which kept things stable until the ESL Pro League.

During the Pro League so far, Selfless is off to a rough start. First off, they lost both maps against Echo Fox (13-16 and 14-16) then to Immortals with was a much worse case (1-16 and 8-16). They encountered the new Australian Winterfox and picked up first map at 16-13, then proceeded to lose the second map 16-19 in overtime.

Relyks was disappointed with the performance, as he said on Twitter, and it is believed that due to this performance, he has left the organization. Selfless is now playing with their former sixth backup player Kaboose.

For Team SoloMid, they are gaining a stable player who can also slay when it is needed. Relyks may not be experienced internationally but are also domestically experienced with him playing up against the likes of C9 and pushing OT.

With the next chapter of the NA Shuffle passed, we await the next change. Good luck on TSM Relyks.

What do you think Relyks will change about TSM and do to other teams in the ESL Pro League? Let us know by commenting below or tweeting us @GAMURScom.

If anyone has any critcism or requests/ideas, you can find me on Reddit under /u/stitchtv, under Twitter@stitchCSGO, or email me at [email protected].