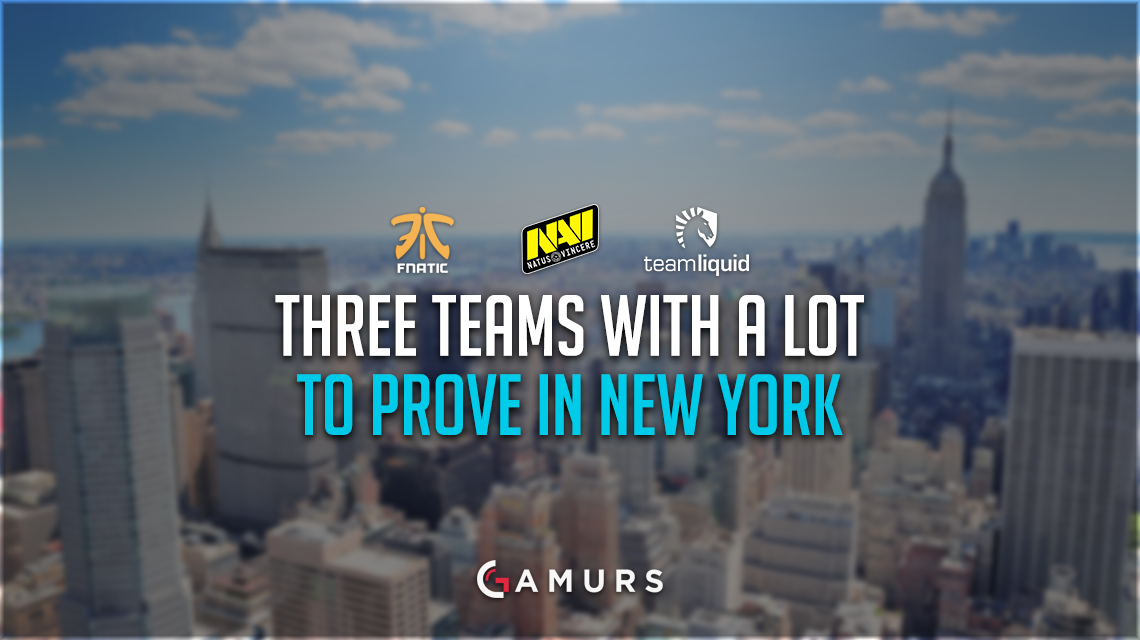 For the Ukrainian organization, ESL One New York gives the lineup that is stacked to the brim with talent the chance to showcase the strength they hold on paper. Being only the second offline event for this recently brought together roster, and their first that includes the formidable foe of the best team in the world, SK Gaming, Natus Vincere has not only the chance, but the need to prove to the world that their lineup can rival or beat their old one.

The lineup that preceded the one Na`Vi currently fields included Ukrainian Counter-Strike legend Danylo “Zeus” Teslenko, who, despite his lackluster individual performances at times, did lead the team to place second at two consecutive majors. From the end of last year to the MLG Columbus major, Na`Vi was thought to be one of the best teams in the world, evident from their high placings in both Columbus and Cluj. Zeus and his teammates also managed to collect tournament wins at DreamHack Leipzig, IEM San Jose and the Season 2 Finals of Counter Pit’s League. Between the majors held in Cluj and Columbus, Na`Vi was a beast of a team.

This summer, though, we saw the consistent high placings of Na`Vi fall, and the lineup that had seemed on the precipice of reaching a level where they would win a major seemed depleted. Not beaten, however, but for a lineup with the skill ceiling of Na`Vi, a change was needed to help them reach that major-winning level. Choosing the player was simple. The talisman, prodigy and star of the CIS region, Oleksandr “s1mple” Kostyliev was on everyone’s radar after helping Team Liquid achieve such amazing major results two times in a row, in both Columbus and Cluj. Kostyliev’s semifinal performance against Fnatic was what the audience had come to expect from the dynamic superstar. Once again, s1mple topped the scoreboard and advanced his team to their first ever major final, thanks to a 2-0 win over Fnatic, where s1mple was only three kills short of collecting one per round.

Seeing s1mple help Team Liquid in such an influencing way in two majors set the expectation of him joining the storied core of Na`Vi to incredible heights. The best talent from the CIS region joining the best team in the CIS obviously carries with it high hopes from fans of the professional scene. s1mple’s addition to a team already including superstar players Ladislav “GuardiaN” Kovács and Egor “flamie” Vasilyev gives Na`Vi, without a doubt, the most firepower, individually, of any team in the world. Na`Vi looked capable of storming the scene.

So far though, they haven’t stormed the scene. Having a poor LAN debut at the StarLadder Season 2 Finals has set the tone for Na`Vi’s form since adding s1mple. Losing best-of-ones to TyLoo and Astralis caused Na`Vi to head home in last place from the event, a very underwhelming result for a team with so much potential. On the bright side for the reputation of Na`Vi, StarLadder can be seen as a fluke, or a one-off. Having only recently brought in a new player, one poor tournament can be forgiven. But two large offline tournaments in a row? That would tarnish their name.

This is why Na`Vi must show their all in New York. They have the individual talent. It’s time for them to show us what their incredible roster can do, and retain the respect their name commands.

Global champions. Major winners. Unbeatable. These are all terms that pop into my head when I hear the word “Fnatic.” But is it fair to still call them this? Fnatic recently underwent a huge lineup change that split up one of the best teams in the world and created two strong-looking lineups playing under GODSENT and Fnatic. Since the roster mayhem that Fnatic went through, the new team has yet to appear at an offline event. As ESL One New York is their first offline event with this roster, and they’ve had reasonable time to gel, it will be interesting to gauge from this event if we can still call this team “global champions.”

Prior to Fnatic’s roster split, the team accomplished a ridiculous amount of triumphs and victories together. After adding Dennis “dennis” Edman to the team in place of Markus “pronax” Wallsten, Fnatic found a plethora of success, winning six tournaments in a row with Edman. While none of these were majors, they did feature heavy-hitting international teams and were prestigious tournaments. Having success before their roster change, Fnatic share a similar storyline with Na`Vi, who also has the weight of their previous accomplishments pushing them to show strength in New York.

Since the roster change, only Edman and Olof “olofmeister” Kajbjer remained on Fnatic, with Simon “twist” Eliasson, John “wenton” Eriksson and Jonas “Lekr0” Olofsson joining the team, Fnatic has only played ESL Pro League matches. The “sson’s” of Fnatic seem to have fitted in well to the team, as Fnatic currently sit on 10 wins and six losses in the Pro League, which is not a terrible situation when you remember they’ve undergone roster changes. The real indicator on whether or not they can live up to the roster before theirs will be New York, an offline tournament packed with the best teams in the world, even including major-champions, SK Gaming.

Not only will Fnatic be wanting to show that they can live up to their former lineup in New York, it will also be intriguing to see who came off best from the Swedish swap in terms of early success. As GODSENT has not been able to find many offline victories since the swap, eyes now turn to Fnatic to see how they will fare. GODSENT has had a series of unfortunate events recently, including a group stage exit at the StarLadder Season 2 Finals and a 3-1 loss to mousesports at the Gfinity Invitational last weekend in their first game. I don’t know the inner-workings of the two teams, but I’d bet that Fnatic will want to prove this weekend that they emerged from the Swedish shuffle looking in better shape than their compatriots GODSENT.

ESL One New York is the arena where Fnatic will make their LAN debut for their new side. The team has a lot to prove at this event, so it’s sure to be a drama filled weekend full of awesome Counter-Strike.

It’s hard to predict how Team Liquid will come into ESL One New York. We’ve seen what they’re capable of with s1mple, which is a level that can almost win majors, but it’s unclear how they’ll perform without the Ukrainian powerhouse. Four of the five players who reached ESL One Cologne’s Grand Final remain on the team and will attend New York. As for their fifth, Jacob “Pimp” Winneche is the man who will try and fill the large gap left behind by s1mple. Pimp is a great rifler and good AWPer, granted not as good as s1mple, but definitely gives Liquid promise to be able to maintain a form close to what they displayed in the Cologne major.

Liquid’s main storyline as they come into ESL One New York is whether or not they can keep a similar level of play to what they exhibited when they played with s1mple last major. The predominantly American side come fresh off a boot camp and after having reasonable time for Pimp to assimilate into the team. Liquid has a lot to gain from a strong performance in New York.

Firstly, showing that their current lineup is capable of feats similar to their Cologne campaign will remove the star that stands by that result. As their Cologne run stands, the question of whether s1mple was largely responsible for their deep tournament run looms over it. Showing that Liquid really does have what it takes to replicate this kind of result at least somewhat against top teams will remove that, as they will have proved that they are capable of reaching the business end of an international event without s1mple.

Also, Liquid will be wanting to build up to being the kings of North America again. A title they arguably held for a large portion of this year, being the best team in North America is something Liquid is certainly capable of, as their lineup alone boasts no weak links on the team, with all of their members being able to pull off something magical when needed.

Missing out on the Northern Arena tournament early on in this month makes ESL One New York the first chance for Liquid to show off their “Pimped out” lineup offline. Beating some of the top European teams in a prestigious event is sure to lift Liquid’s status in North America back up to the top echelons, a place they held between their good major showings in Columbus and Cologne.

Liquid has the chance to show to the world that their lineup is very much still an international threat, and debut their new lineup and begin the process of regaining their North American crown. With all of these teams having something to prove in New York, the event is sure to be one to remember.

What teams are you going to be rooting for at ESL One New York? Let us know by commenting below or tweeting us @GAMURScom.