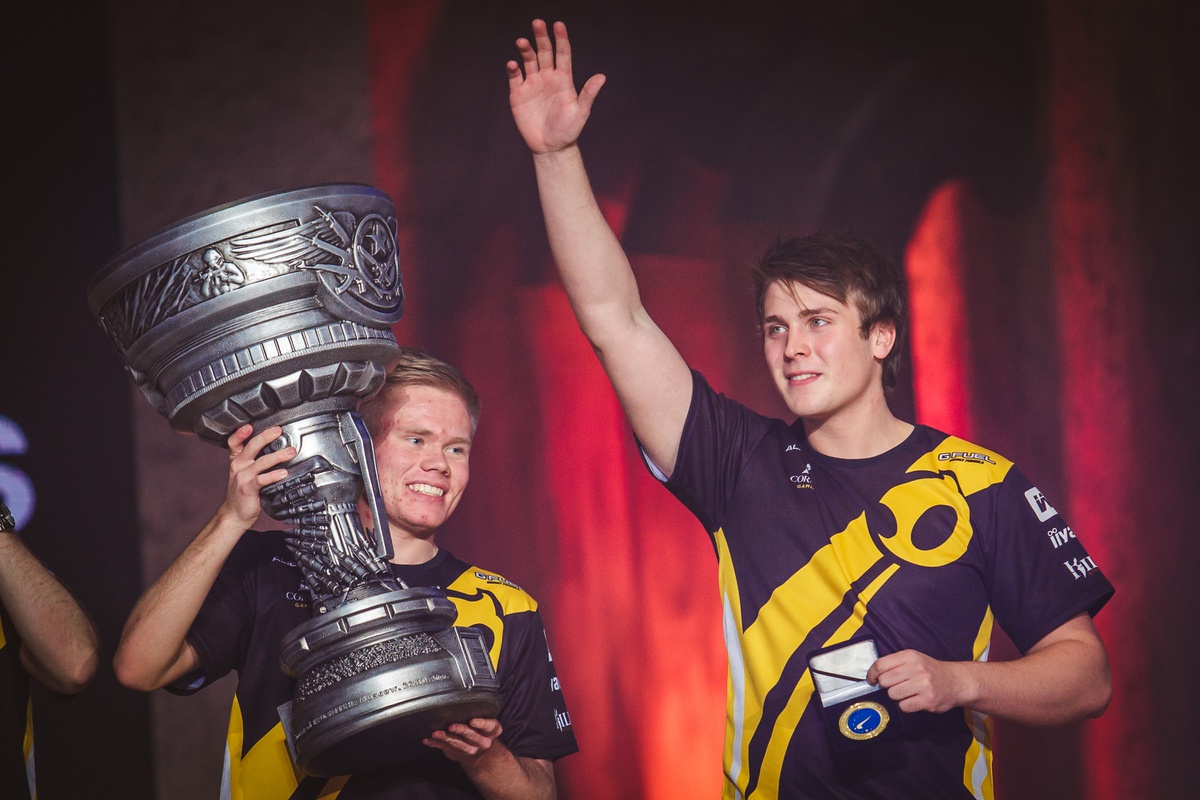 The ESL ProLeague Season 4 Finals may not look as mouth-watering as EPICENTER’s lineup, but fields more teams and provides a chance for deep finishes from some who have not been as successful recently, with elite teams Virtus.pro and Natus Vincere not in the mix. Why must SK win on home soil? Are Dignitas about to go back-to-back? Do IMT choke? Here are seven storylines for the EPL S4 Finals.

1. SK Gaming will drop in status further if they don’t win the title

The fall of SK has not been as bad as some of the other great teams in history once their time as the best came to a close, but SK have seen themselves go two international tournaments in a row without an appearance in the finals and their repeated losses to Virtus.pro put them in the position of no longer being the number one team in CS:GO in the minds of any expert in the game.

Losing to VP, the game’s new top dog, is as close to acceptable as you can get while still remaining an elite team. Even so, Na`Vi and Dignitas have both handed said Polish side Bo3 losses over those last two events, so it’s not as if Snax and the gang are dominant and unbeatable. The problem for SK is that right now they can hang on to a narrative of “if only we didn’t face Virtus.pro we could have been in the final or even won the event”. In a world in which other teams can beat VP, an obvious path opens up as to how SK could still win a title and begin to climb back into the race for the number one spot. That narrative will be tested in Brazil.

With no Virtus.pro or Na`Vi on site, even given a second chance due to FNATIC dropping out, SK Gaming are the biggest name in the field. The team who dominated the Summer as their era face only the newly championship status Dignitas, an NiP trying to go best two-out-of-three with Maikelele standing in still and that’s about it. Even losing to those two teams wouldn’t really cut it for FalleN and company, as their victory at ESL One Cologne saw them tested by only a single top team and even then coming out on top in a battle of great play.

This is a field that would not challenge the SK of a few months ago, yet provides them with a test of where they are as a top CS:GO team right now. Forgetting Dignitas and NiP, losses to teams like Cloud9 or their fellow Brazilians in Immortals would be both humiliating and humbling. For SK, championship form must begin again on home soil or else many will, justifiably, begin to wonder if they will win again.

With a revitalised FaZe in their group, one could argue that even progressing from the group will not be easy for coldzera and his crew.

2. Will Dignitas make winning a habit?

Dignitas were a team who had been showing their potential for all who wished to see. Top four finishes at both StarSeries S2 and Dreamhack Bucharest, the latter being a close defeat at the hands of champions Virtus.pro, showed that MSL’s men were becoming one of the best teams in Counter-Strike. EPICENTER saw them truly unleashed, though, as everything came together at the same time to produce victory in a $250,000 or more prize pool tournament, something Danish rivals Astralis have never accomplished.

Suddenly, Magiskb0Y was the best player in the tournament, k0nfig was stacking up impact kills for fun and MSL’s leadership had Dignitas with one of the most versatile and deep map pools in the world. Sure, a similar performance from RUBINO might not be expected in the future and Magiskb0Y achieving a +90 differential against only top 10 ranked opponents would make him a candidate for best player in the world, so one must also tempers one’s excitement a touch, but Dignitas didn’t just look good, they looked ready to win more.

With Virtus.pro and Na`Vi sat at home watching on twitch like the rest of us, Dignitas are primed to go back-to-back and take the EPL title too. Their map pool strengths and consistent fire-power means they are a lock to get out of the group stage and then it’s just a case of when they run into SK Gaming. If they face the Brazilians then it could still be the case that FalleN’s men can produce an epic series and take them down. That much is not guaranteed, though, and one gets the feeling that if Dignitas do not face SK then the tournament is theirs.

In an era in which titles are going back-and-forth among the big names, Dignitas winning was some spice in the soup, but taking two titles in a row would really set forth their potential claim to one day becoming the world’s best team. Of course, winning now is also at a premium since it seems likely they will be forced into a roster change in the near future. The ailing condition of Astralis means device and company are circling Dignitas and looking at juicy morsels they’d like to gobble up into their team. If Dignitas cannot retain the services of all of their stars, then they must at least win as much as they can while they still have them.

3. Can Immortals handle the pressure?

Immortals have been one of the revelations of 2016, winning Gfinity CEVO-P S9, with a Bo5 series win over Virtus.pro, and besting NiP to take the Dreamhack Summer title. They even took care of NA with their win over Cloud9 at Northern Arena Toronto. The problem for Brazil’s newest would-be elite team is that they are denied true global contender status by virtue of their play when it comes to the $250,000 or more prize pool events. At IEM Katowice they fell to a Na`Vi who were still great, but showed some weaknesses. Beyond that, boltz and the gang have only disappointed. Failure to qualify for the two majors and going out of ELEAGUE in the group stage suggests the bright lights blind them still or make them question their characters.

With the raw skill of felps, the insane shot-making of HEN1 and the consistency of Boltz, this should be a team who can become what Dignitas were prior to EPICENTER: solid, dangerous to those ranked above them and working their way up the competitive ladder to elite status. For now, zews’s boys have yet to show they are ready. EPL marks an excellent chance, though, as their group gives them good odds to reach the playoffs. Once there, there are plenty of scalps to be collected. Even their countrymen of SK might be a possibility, though the psychological edge still remains on cold’s side.

Can the reduced field of contenders allow the NiP of StarSeries S2 to shine through and run to the final? Will the NiP which couldn’t get enough rounds to escape the EPICENTER group stage, thanks to a fairly ridiculous tie-breaker rule, be on display again? NiP are still figuring out what the ceiling is with this Maikelele stand-in situation and their group is not an easy one. Another group stage elimination would be humiliating and start people wondering both when pyth can return and what will happen at ELEAGUE.

If NiP can get out of the group, though, then they have a legitimate shot at a deep run in Brazil. That run will require f0rest to return to star status, though, as their long time star looked pretty underwhelming in Moscow.

Cloud9 have managed some solid placings on paper, but their losses have been more telling. Top four at two international competitions sounds great, until you examine who they beat and who beat them. Their most legitimate win was a Bo3 series over the old EnVyUs lineup, a team hanging around the bottom of the top 10 but not with championship aspirations right now. Beyond that, they have only beaten Heroic and FlipSid3 of note in series play, teams who lack fire-power or deep placings.

C9’s losses have been against Immortals, NiP and Virtus.pro. The latter two were far from pretty, as C9 took a real beating at the hands of the tier one European competition they faced. Dominating NA online is all well and good, but it matters little in the realm of elite offline competitive play. C9’s EPL group throws up NiP, SK and Dignitas for Stewie’s men to face just to progress into the play-off bracket.

Should C9 find themselves in the top six of the event, then it’s hard to see who can get out of Group A that they will definitively beat. IMT have already taken them down, mouz beat them at ELEAGUE and look solid, TL are anyone’s guess but managed a more notable international placing in the last few months and nV have arguably upgraded with SIXER’s arrival. Your author has C9 failing to get out of the group, but even if they do they will likely be finishing their run in 5th-6th, unless they have something more to show us than they have thusfar.

FaZe over 2016 played the role that HellRaisers did for 2014: ruining the tournament chances of would-be favourites by winning over them in Bo1 only to lose themselves in Bo3 and ease the path of someone else in the tournament. The new FaZe, with karrigan instated as leader, shocked the world by surviving an ELEAGUE group which featured Cloud9 and Immortals. It was not just the results themselves but the nature of them.

karrigan brought his affinity for overpass with him and turned a team who barely played the map into a side which could rack up T side rounds. Added to the equation was their dominant mirage performance against IMT. The only map FaZe still looked questionable on, in their play in Atlanta, was train, the old lineup’s speciality. If that was FaZe after two days of karrigan, then what will a week give them? Most teams headed to Brazil right after EL, but even days of talking and planning could help see a more well rounded FaZe at EPL.

karrigan is a good leader, FaZe has some good talents and now they have a reason to feel good about themselves. In a group in which nobody expects them to progress with any certainty, they can test themselves against a number of top 10 ranked sides and perhaps even play spoiler to someone else’s chances with some upsets. Getting into the playoffs is not expected or necessary, as this is all just another learning experiment early in the game for karrigan and company.

Their weakness on train will even help them against SK, since they won’t be tempted to allow it in the pool against a team which despite other deficiencies in murdering people outright on that map.

Team Liquid only narrowly earned a spot in the playoffs at ESL New York, beat Na`Vi on the Ukrainian side’s nightmare map and managed a decent but too late push on the decider against s1mple. Group A of EPL was already ridiculously weak, in contrast to Group B, so FNATIC, who have looked a little better with their last outing, dropping and not being replaced, it should be even easier for TL to reach the playoffs and start to solidify their status as both a top NA team and a potential top team globally.

The questions for TL are if EliGE can get anywhere close to the MVP type form that powered them to that result in New York, what shuffling the IGL position around means for nitr0’s play and how their map pool will actually fare now that people know to avoid their dust2 and cbblestone. If TL can crack top four here, they then will show themselves to be legitimate. If they fail to, then many will question if they are even the best NA side.