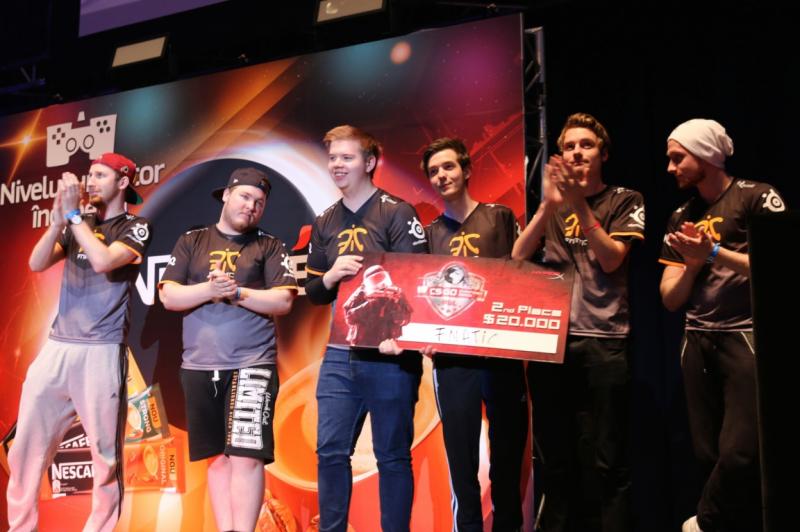 The PGL CCS tournament last week say three of the top five teams in the rankings battling it out in a double elimination format, so it’s time to see how the events which unfolded there affected the rankings.

The kings return to their throne despite leaving Bucharest without the trophy. With underdogs TSM the ones who shocked the world, none of FNATIC’s rivals for the top spot gained any ground on them, with the French ursupers of EnVyUs going in quite the other direction. FNATIC’s finals spot not only secured them another top placing, but they beat EnVyUs and NiP, the number one and three ranked teams on my list, en route to the final.

With four straight top two finishes in significant tournaments, FNATIC’s spot at the top is looking more secure than it has in many months, as events from the beginning of the year start to fade in importance.

Much as when EnVyUs took the top spot for the first time, following their win at MLG X Games Aspen, the French side’s tenure as the world’s best has been short-lived. This time, it lasted for only two events, with failure to make the finals of either, while FNATIC made two straight finals, being a decisive factor in preventing NBK’s men from falling down to second again.

nV have lost Bo3 series to Na`Vi, NiP and FNATIC in the last two events, losing out on valuable chances to prove help cement their status as the best team in the world. They are still a very consistent team in terms of their overall level, still having yet to ever place below the top four, but they seem to have returned to Earth from the team which was blitzing everyone in their path at Gfinity and StarSeries XII.

Perhaps that Mayweather-Pacquiao-esque meeting between the French side and FNATIC really did miss its window of ideal competition, as neither are as unbeatable for the other teams any more and each has key players who are not in the sparkling form of their title runs. nV are still the second best team in the world, but they find themselves in a dangerous new world in which many more teams are joining the list of would-be champions, as opposed to that incredible stretch of 13 straight tournaments where only FNATIC and nV took home trophies.

It would appear that the nV and FNATIC era of dominance has come to a close.

Bizarrely, the Ninjas managed to have one of their best performances in their last three events, yet finished with their worst placing over that span of time. Defeating EnVyUs, the team who had won four straight series and nine out of 10 maps against them, was a significant moment for GeT_RiGhT and the gang, being as the French side had been their kryptonite time and time again. The problem for NiP, is that they then went on to be cleanly beaten by TSM, a team who they themselves had played the kryptonite role for over many years, and then lost out in embarrassing fashion to domestic rivals FNATIC, with the killing blow being a monster CT cbblestone performance from olofm’s boys.

A couple of events ago, NiP were firmly lodged in the third spot, unlikely to win an event, due to the dominance of nV and FNATIC, but better than all the rest of the teams, on average and in terms of series wins. Now, NiP are in the unfortunate circumstance of being a top ranked team yet without a notable international tournament title victory, where five other teams can boast them in the past few months (FNATIC, nV, Virtus.pro, TSM and Na`Vi). One thing has not changed: NiP need to win some events before they are likely to be able to move into the top two.

TSM’s victory in Romania was one of the most impressive of the year, winning a Bo3 over FNATIC, a Bo3 over NiP and a Bo5 over FNATIC. As well as being one of the best title runs of 2015, thanks in part due to the format and field, the win was enough to edge them up a spot and over Virtus.pro in the rankings. Yes, the Poles have won two titles, taking down Copenhagen Games, and over TSM at that, but all of VP’s strength lies in their placings, not the quality of them.

VP have only secured one Bo3/Bo5 series win over a top four ranked team in 2015, defeating FNATIC in the final of ESEA S18 LAN Finals. TSM, on the other hand, have beaten FNATIC twice, Virtus.pro twice and NiP once. VP have beaten TSM twice and Titan once, where TSM merely have a win over Titan once we move to teams outside of the top four but within the top 6-7, but the edge clearly lies with TSM, due to their quality wins over the elite tier teams.

Going purely off placings alone, I would have given VP the edge due to one of their top fours being at the major, but the only Bo3 series they won there was over Keyd Stars, highlighting the somewhat deceptive nature of placings, considered without the context of the matches played there.

A key feature of how I analyse team’s results, is that I don’t take points away for losing, I only give them for winning. So losing a series or tournament does not pull a team down the ranking, it merely provides an opportunity for teams who attended and placed well to gain ground on them or push further out into the lead over them. The reasoning for this is that I neither want to punish teams for attending tournaments, where the teams ranked alongside them might not have, nor give them a benefit purely from attending an event but not scoring any notable results.

That latter concept is key to the TSM vs. VP debate, as it means that some of the additional tournaments they attended, which TSM did not, are not of much significance to their overall placing. At ASUS, IOS, EPL Winter and StarSeries, the Poles either finished in last place or failed to progress from the group stage. At Gfinity Spring Masters, the only team they beat of note was Cloud9.

Virtus.pro did not play since the previous edition of the rankings and thus have not had any opportunity to gain in the standings.

Titan did not play since the previous edition of the rankings and thus have not had any opportunity to gain in the standings.

Na`Vi did not play since the previous edition of the rankings and thus have not had any opportunity to gain in the standings.

PENTA did not play since the previous edition of the rankings and thus have not had any opportunity to gain in the standings.

Dignitas did not play since the previous edition of the rankings and thus have not had any opportunity to gain in the standings.

Flipsid3 did not play since the previous edition of the rankings and thus have not had any opportunity to gain in the standings.

This Friday’s FACEIT LAN Finals will provide an opportunity for a number of the teams in the rankings to move up or solidify their spots.