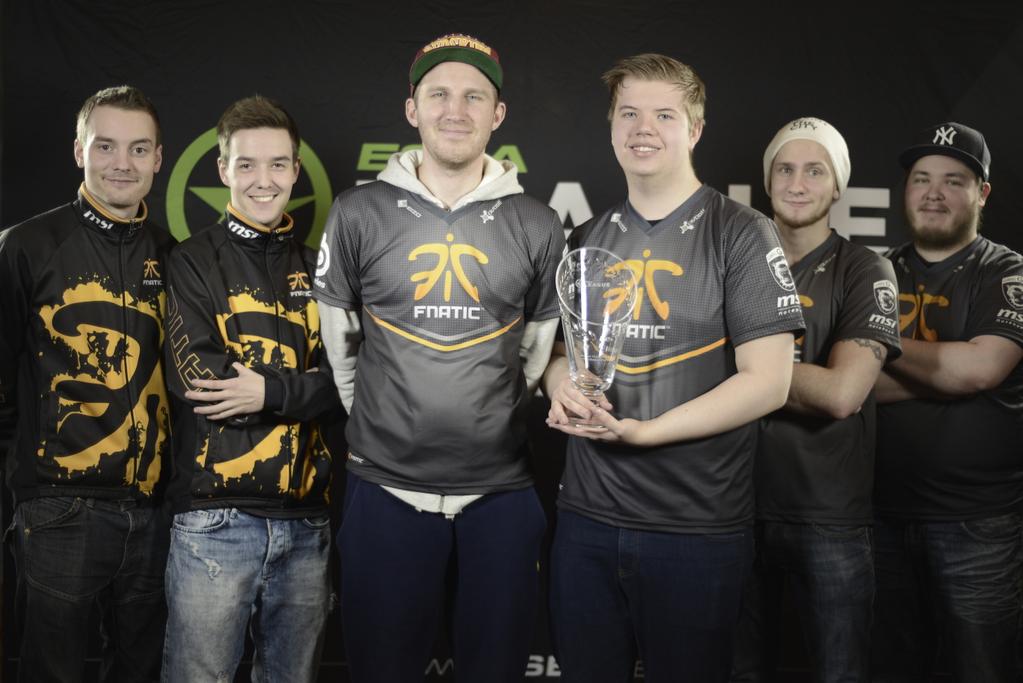 CS:GO has always struggled for a consistently and coherent set of World Rankings, with so many teams attending different events and the difficulty of judging the context of which event’s results should count for more than another. Rather than construct some kind of elaborate point system and place my expertise into the task of allocating which would receive how many points, I’ve instead looked back over the recent form of each of the teams out there and determined, according to my own analysis and intuition, which team ranks where in my global top 10.

The ESEA S17 LAN finals took place last weekend and thus the rankings have to be altered to reflect the outcomes of the matches place there.

FNATIC’s winning streak was snapped with their controversial exit from Dreamhack Winter in the quarter-finals, losing to world number twos and eventual champions LDLC, but the Swedish side returned to their winning ways in Dallas. FNATIC have now won four of their last five offline tournaments. LDLC weren’t present in the USA, but that’s hardly FNATIC’s points and the Swedes gain a little extra lead at the top thanks to winning yet another offline tournament.

That FNATIC won two Bo3s back-to-back against Virtus.pro, my third best team in the world, really shows that the Swedish site are still the very best, even if they don’t look to be in as dominant form as their three tournament title spree. This tournament did see FNATIC almost lose to Titan, but they held their nerve and were not upset in that series. KRiMZ and company don’t seem like the unbeatable monsters anymore, but they are still the world’s best team.

The Dreamhack Winter champions were not in attendance at ESEA and the team above them were the champions, so there was no reason for the French side to move up or down on the rankings. They may yet end up world number ones in the future, but they still have a lot more to prove before they can out-strip the success of the FNATIC era.

Virtus really showed why they can be considered gatekeepers to the best teams in the world at this tournament, managing to lose maps when they were overwhelming favourites, such as against iBP and Cloud9, but then defeating FNATIC in a Bo3 as underdogs. When the final rolled around, FNATIC handled them convincingly enough and the aura of Virtus’ magic had dissipated. ESEA was overall a commendable result for Virtus, though a little worrying in that they couldn’t manage to secure the second Bo3 win over FNATIC with two opportunities to do so and take the title.

Nothing has changed for Na`Vi and they retain the number four spot.

NiP were not in Dallas and have only had one top offline finish in the last four months. The magnitude of that win was enough to get them this far, but they still have a lot of ground to make up in terms of their form and resume of results in late 2014 and early 2015 to catch the top names on this list. This line-up of NiP can literally only boast a Bo3 win over HellRaisers and a Bo3 win over Virtus.pro as their entire accomplishments. Yes, they came very close to beating LDLC in the DH final, but they also came pretty close to being in distinct danger of being 2-0’d by Virtus in the semi-final.

Dignitas are famous for not attending many events and it may be a while until we see them in action again, putting them in danger of dropping a few spots in the coming months. This ranking also reflects the previous line-up, with the team having dropped FeTiSh for Karrigan now.

Titan made their first offline appearance since KQLY’s VAC ban and it resulted in a very mixed performance. On one hand, kennyS’ carry play was some of the best we’ve ever seen, nearly dragging the seemingly frozen and decaying corpses of Ex6TenZ, Maniac and ioRek over the finish line against FNATIC, the world’s best team. On the other, the same Titan team were bested in a three game series by iBUYPOWER, who were using a stand-in of their own.

The decaying weight of their past results is enough to still gain them a spot on this list, now that they’ve played a tournament again and putting the cheating stain behind them. However, the team has yet to announce its official fifth player and looks as if it may struggle to make any impact on the top five for a while.

It was a difficult decision to move iBUYPOWER above HellRaisers, as the American side got this recent result with a stand-in and their previous two LANs have been different line-ups from the side which got the results which gives them any kind of real credibility. With that said, the now regular ESEA LAN boost meant that iBP managed to play VP reasonably close, beat out Titan and then get at least within distance of touching FNATIC, though not entirely. A very confused team, as befits their line-up changes, but enough to edge them into eighth.

HellRaisers said at home in Eastern Europe as ESEA took place, so there is no chance for the CIS super-team, in terms of their own placing. I decided to edge iBP over them, as the North American side displayed a much more meaningfull performance in terms of consistency at ESEA LAN, compared to HellRasiers getting lone map wins over Cloud9 and FNATIC.

A terrible performance for a team who look very much in trouble. I recently addressed the problems which have held them back from being an elite side previously, but now they are on the verge of no longer even being a top team or ranked within the top 10. ESEA was a disaster for this team and puts them on a four tournament run of awful finishes and lacklustre play against the top sides.

C9 were barely able to beat mouz, a team who remain ranked outside of my top 10, and there is an alternate universe in which they would have fallen 2-0 in that opening series without much having to have changed.

I’ll update my world rankings following the next offline tournament.