Video games have been around for decades, starting with game systems such as Atari and arcade games like Pinball and Pacman. Gaming is a form of entertainment that has expanded into many different realms, making it accessible to just about everyone. You can game by yourself or with friends, you can record yourself playing games and upload it to YouTube for your fans, and you can play competitively against other players for money! In my opinion, the world of video games is still growing.

People literally make a living off of video games. This is a relatively new phenomenon, only being possible since the introduction of YouTube 10+ years ago. Gamers such as PewDiePie, Nadeshot, and AngryJoeShow have millions of subscribers, receive millions of views, and make a whole lot of ad revenue money as well as money from personal apparel sales. Gaming can be a career!

I recently watched a documentary by Vice on eSports. The documentary was filmed by a guy who didn’t really know much about eSports or gaming to begin with, but he heard about the League of Legends World Finals from a while back, the one that took place in Korea, and he decided to investigate it. The entire documentary focuses on LoL specifically, but it dives into a few different aspects surrounding gaming culture.

That documentary can be found here:  http://www.vice.com/video/esports-part-one?utm_source=vicetwitterus

First of all, the documentary series was a bit cringy at times, but at the end it had me pumped about eSports. I’m not even a big fan of LoL, but when I see what the game has achieved in terms of players and fan base, I am amazed! It has been the most popular game worldwide for a while now, even though there are only 3 (?) maps/gamemodes to play on. The diversity comes from the champions you select, and there are a whole lot of them! Riot, the game developer, is always coming out with new champions, keeping the game fresh. Many people interested in LoL watch the competitive players as well, and the teams have fan bases similar to professional sports teams!

League of Legends is not the only eSport. I usually write about Call of Duty, which gets pretty decent viewership of competitive events. Some of the games top players also create YouTube videos (I mentioned Nadeshot), which is great for expanding the eSport. Recently, a lot of buzz was generated in the community during the ESL One CSGO tournament in Katowice, Poland. The reason for all the discussion? During the finals match, which pitted Fnatic vs NiP, the Twitch stream of the event reached 1 million viewers. 1 million! I think that is some type of record! 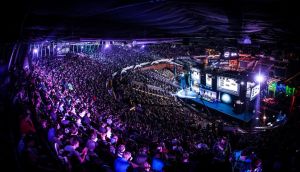 If you google Katowice right now, the first few hits bring you to pages about the event. Specifically, CSGO is the eSport of choice in the search, even though League of Legends was being played at the same time in another arena. This brought a lot of discussion to the Call of Duty community because 1 million viewers is unheard of. The first event for Call of Duty Advanced Warfare generated a commendable 200k viewers before Lizard Squad attacked the stream (those guys suck), which is not bad at all.  However, several tournaments have been played in preparation for the Call of Duty Championship, including the North American Regional Finals, and the streams did not reach such high numbers.

The 2015 Call of Duty Championship will be played in less than 2 weeks in Los Angeles, and 32 of the best teams in the world are attending. The event is sure to have a high viewership, but I doubt that it will compare to the 1 million viewers CSGO got last weekend. People have discussed a few reasons why Call of Duty is a bit behind other eSports.

When there is money involved, people become invested. CSGO has a system where people can place bets on the outcome of a match, which ultimately brings in fans that otherwise would never have noticed the game. On top of the betting, CSGO has unique items that can be sold to other players, and some items are worth a lot of real money!

Major League Gaming has invested a lot in eSports. Approximately one year ago, MLG created their own streaming service to rival Twitch. However, a channel on MLG.tv is invite only. At first, only the top professional players had MLG streams, but they began expanding with time. Now, some streams belong to organizations as well as entertainers that were originally on Twitch. MLG has a strict policy with it’s professional Call of Duty players, where they are not allowed to stream on Twitch. Many believe that this rule has stunted the growth of the eSport, and possibly even decreased the size of the community.

I personally believe that Call of Duty, as well as other eSports, are still growing. Each game has it’s advantages as well as flaws, but that is what makes them unique. There are potential fans out there yet to discover eSports, and the fan bases area always expanding. Maybe someday we will see eSports on cable television? That day may be a while away in the United States, but in Korea it’s common. It is clearly possible.

What do you think about eSports and their growth? Let me know in the comments!