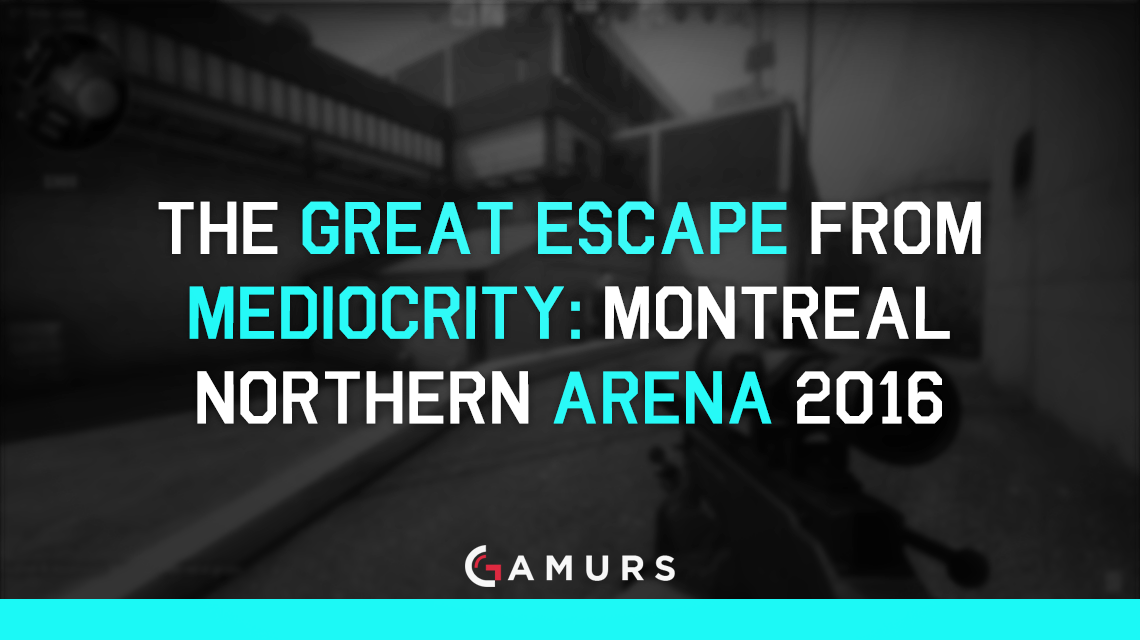 The slums of the Counter-Strike: Global Offensive city is the gathering point for its detritus. Washed-up veterans, online talent long forgotten, and foreign souls crushed by the same free market they looked to exploit, are all common tropes for the part of town where the spectacular azure sky of form is obstructed by an undulating canopy of intangible excuses.

While most will spend the rest of their career in these parts – forever indoctrinated in the cold shade of failure – some will try and escape. They’ll feverishly hack away at the dense overgrowth of these slums, desperately looking for lances of hope, form and opportunity on the sought after LAN stage. The goal of success cannot be achieved without opportunity, and for those that look to either escape individually, or try to move as a five-man collective force, the most promising opportunity is always on LAN.

LAN events are the great equaliser of excuses and bastion for the highest level of play, and any failure or success on this stage is done within the assumed vacuum of fair play. As such, Northern Arena 2016 in Montreal will provide an opportunity for individuals and teams to execute a great escape from their relative slums of mediocrity, failure and untapped potential.

These labels of “mediocrity,” “failure” and “potential” are applicable to every team present in Montreal, even the French pairing of G2 and EnVyUs, who are the clear favourites to take home the trophy. When we think of EnVyUs and G2, we think of the French giants; the titans of play who, while not simultaneously, can shake the CS:GO kingdom to its core with a streak of form from any of the ten players presently on the two teams. They were the slayers of the Swedish Sithlords in 2015, and the only competition against the apex of Brazilian power in 2016.

However, that might as well have been a lifetime ago; while EnVyUs is on a slow upwards trajectory, both teams can’t boast a single best-of-three win over a top-10 team in the last months run of tournaments, and despite their namesake, have befallen to a current state of mediocrity. On the other hand, G2 remains enigmatic as ever, placing top-two at one event, then finishing last place at the next.

EnVyUs seems to at least have one player in-form. Kenny “kennyS” Schrub has – after the longest lapse of individual high-level play in his career – returned to the conversation of being the best AWPer in the world. With consistent star performances, despite his team’s shortcomings, KennyS will look to be the expected executor in his team’s plan to win Northern Arena. If KennyS can exert a level of vintage dominance on the weaker order of teams present in Montreal, and carry his team to a win, he will gain the much-needed confidence headed into the back-end of 2016 to potentially become the God he once was.

However, a win at Northern Arena could potentially mean a lot more than just the foundation of a resume to become an elite team or player. As reported by Dekay on Twitter, the contracts for both G2 and EnVyUs “end near the [ELEAGUE] Major.” This means that good performances in Montreal would also act as extra posturing for renegotiation of contracts, or a swap between teams. Considering the relatively underwhelming nature of both teams, the former is more likely than the latter. Within the scope of the short-term, any momentum gained at Northern Arena is momentum desperately required for the French teams to make an impact on a more international scale, but in the long-term, good performances could be the selling point of career and scene-defining moves.

Outside of the surprisingly out-of-place French coupling lies a set of teams in a graveyard of form or looking to enter a crucible of contenders. While Cloud9 is starting to ostentatiously carry the NA flag into the relatively uncharted waters of elite status for Americans, the rest of the region is left to cling onto the scraps of upsets and on-paper potential.

OpTic Gaming and Team Liquid look to be the most promising rosters to escape the shackles of North American mediocrity, with both teams scoring wins over once great European names like Astralis, Fnatic, and G2 at ESL One: New York. What’s more, by Liquid capitalising on Jonathan “EliGE“ Jablonowski’s most standout tournament performance to-date, they played the eventual tournament winners Natus Vincere – who has the acclaimed best player in the world, Oleksandr “s1mple“ Kostyliev – in an agonisingly close 2-1 series. Yet after these string of resume padding wins and close series, both teams failed to make a splash at the ESL Pro League Finals, that had an easier road out of the group stage.

So with both Liquid and OpTic now past their honeymoon and “growing pain” periods of working with new additions Jacob “Pimp” Winneche and Tarik “tarik” Celik, Northern Arena 2016 will be a test to see whether they can contend with fledging, but dangerous, European talent in G2 and EnVyUs, or simply be the kings of the slums by beating the other NA teams (and Heroic) present.

Inhabitants of the NA Abyss, and Once Escaped Talent [CLG, NRG, compLexity, Heroic]

If the gap between Liquid/OpTic and Cloud9 is big, then the gap between Liquid/OpTic and the rest of the scene is an abyss. Counter Logic Gaming, NRG, and compLexity have not even scratched the surface of international LAN play, let alone competitively battle with their own domestic struggles. They represent large organisations with in-theory large backings, but almost nothing to show for it. They have individual names who have in the past been pegged as the next big prospect, but in the present, have been anything but big. Although some of these individuals could, through careful cultivation of their own game, become a star force, it feels as though the stories of their current rosters are going to be the gritty, drama filled but achievement empty, chapters of their autobiography, rather than one with starry-eyed optimism. These three teams could possibly upset OpTic/Liquid in groups but are likely to use the crashing and burning of their own teams as temporary light and warmth, deep in the inescapable slums of NA CS:GO.

Then there was one, the ugly duckling of the bunch; the Danes in a sea of Americans and Frenchman. Upon their formation, the player-owned organisation Heroic was unknown. However, non-stop grinding at any opportunity while most teams rested in the offseason, combined with excruciatingly close best-of-three series, and best-of-one wins on LAN against established teams, led to a breakthrough appearance in the top-10 teams in the world.

Their brief moment in the sun was, however, cut abruptly short by Astralis executing in part chicanery, and in part the prospect of bigger and better things by picking up Heroic’s in-game-leader Lukas “gla1ve” Rossander. This has quickly reigned back the once escaped talent, as they were knocked out consecutively at ESWC and the Europe Minor in disappointing fashion. Northern Arena should be the staging point to work in their inexperienced replacement for gla1ve – young aim-star Nikolaj “niko” Kristensen (not of the Belarusian kind) – and anything learned in Montreal will be invaluable for trying to work towards another escape in the near future.

Although Northern Arena Montreal 2016 presents a slew of marred and lackluster talent that seems to be nothing more than padding and folly to group stage play, it also puts forth a few diamonds in the rough with potential, to make a great escape from either their individual or domestic scene’s mediocrity.

What are you looking forward to the most about Northern Arena Montreal 2016? Let us know by commenting below or tweeting us @GAMURScom.