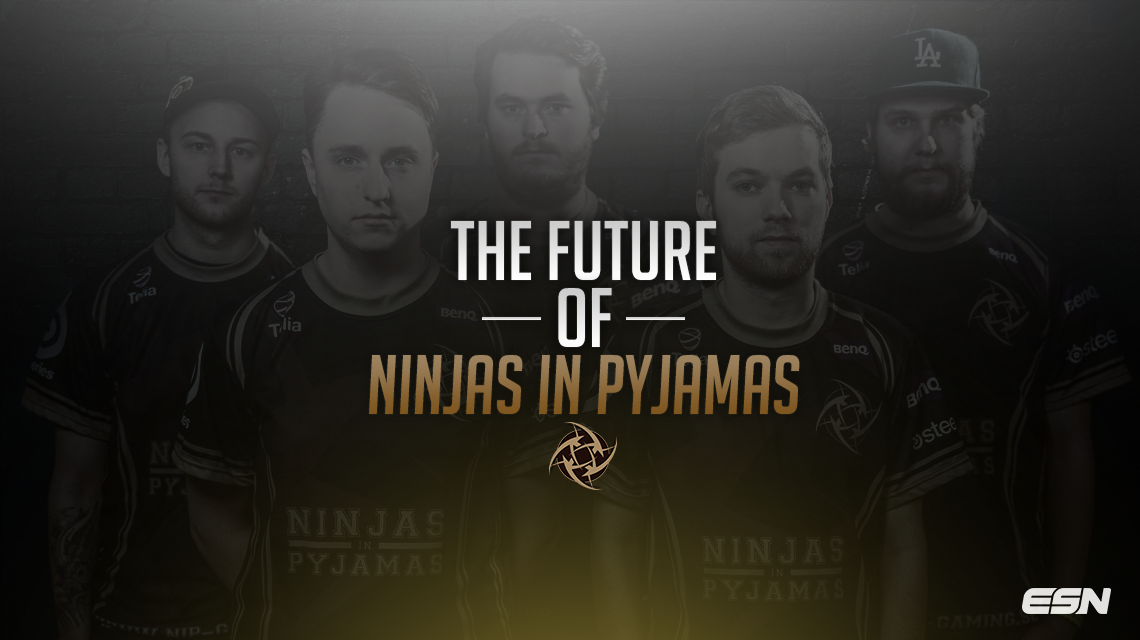 Inconsistent results have left fans with a lot of questions surrounding the future of Ninjas In Pyjamas. The team is made up of a veteran core of three players who are considered some of the greatest talent in Counter-Strike®: Global Offensive history. So what is holding them back from returning to their winning ways?

The team – Adam “Friberg” Friberg, Richard “Xizt” Landström, Christopher “GeT_RiGht” Alesund, Patrik “F0rest” Lindberg, and Robin “Fifflaren” Johansson – hold the record for most consecutive wins at an unbeatable 87 LAN match victories. There’s no doubt that NiP have what it takes to win.

One of the most exciting factors in Counter-Strike , is the ever evolving strategy, meta and understanding of the game. This is what rewards teams that put in a lot of work, perfecting their craft, catering to the playstyles of the individuals on the roster. There is no doubt that NiP have proved their dedication in terms of work rate when it comes to practice, from team house bootcamps to arriving hours early at a venue to practice beforehand, the boys can not be criticized for their work ethic.

If there is one thing that you can take away after watching a CS tournament, it is that there are a number of different ways you can win a game. Some teams prefer to focus on their own strategies, creating unique pushes, using their utilities in new and inventive ways. There are some teams which focus more on the opposition, studying demos and producing counter strats to manipulate what their opposition can produce.

However, despite the broad possibilities when creating strategy, the one common factor in all great teams; one that separate the pros from the amateurs, is the foundation of what they build them on, which are fundamental skills in CS. NiP has shown greatness in this category, with strong defaults on their Terrorist side de_dust2 and de_inferno, plus more of the current map pool, and they have shown their ability to adapt to new maps with inventive plays on de_cbble. It is also their mastery in the game’s core mechanics which allow them to produce “NiP Magic” and succeed in situations they simply have no right winning.

Often, the blame to their recent downfall is placed on personal issues with the players as individuals, not as a group. To manage this issue, the team should take a break from competing. The team has already played throughout a vast amount of tournaments this year, with the schedule being so hectic for all the teams. With the constant pressure looming over their heads from fans and more importantly themselves, I think a break would allow the players to find themselves once more as individuals, so they can return as a stronger unit. Ex-NiP coach Natu also commentated on this in his official statement after his departure from the team “But what I can say is there were many physiologically challenging issues.” This really illuminates the mental struggle of the current line up.

Another route the team could end up going in is to mix up the roster. In the past, NiP have always seemed reluctant to make team changes, and for good reason too. The team have a brotherhood like bond which can only heighten the team’s ability to work as single unit. Unfortunately, in business, relationships have to be positioned lower on the scale of priority to allow for success. Moreover, due to language barriers (which are even a current problem with the roster) the candidate pool for a potential recruit is rather low for the Swedish squad. Often, rumors surface regarding potential Fnatic players being considered for a move to NiP. Although being perfect candidates, a move away from Fnatic would be considered unwise, at least in their current successful state.

As eSports grows larger in terms of investment and popularity, the business side of an organisation becomes increasingly important. This is an aspect that NiP has clutched with both hands from the beginning. NiP is the most respected, and well known organisation in CS eSports, and they are an innovative brand. The organisation has dived into different industries, such as food, clothing and gaming peripherals. It is this reason, a spot on the team is in such high demand despite their inconsistent play. A spot on NiP doesn’t just provide you with the support of an organisation and the ability to compete with the best, but a vast avenue and set of tools to learn the gaming industry inside and out from legends of the industry in order to build up a resume for future careers in gaming.

This business entity could be something that actually hinders the team. It is important for a brand to be consistent. In an eSports setting, that relates to a roster. It will be near impossible to sell specialised merchandise if the roster is seeing consistent changes due to player movements. This will also affect the partnerships NiP in which they endorse products and personalised NiP player, products are made by the companies.

As it stands, NiP are not competing at the required level to be crowned champions. The steps in which the team will make in the upcoming weeks may very well be considered the most important in the organisation’s history. With that being said, I doubt the team will rush into a permanent solution straight away. NiP have a family mentality and the situation will be carefully evaluated between all individuals involved before a decision is made. If roster changes are not made, NiP will have a long journey back to the top, but they are not new to facing adversity.