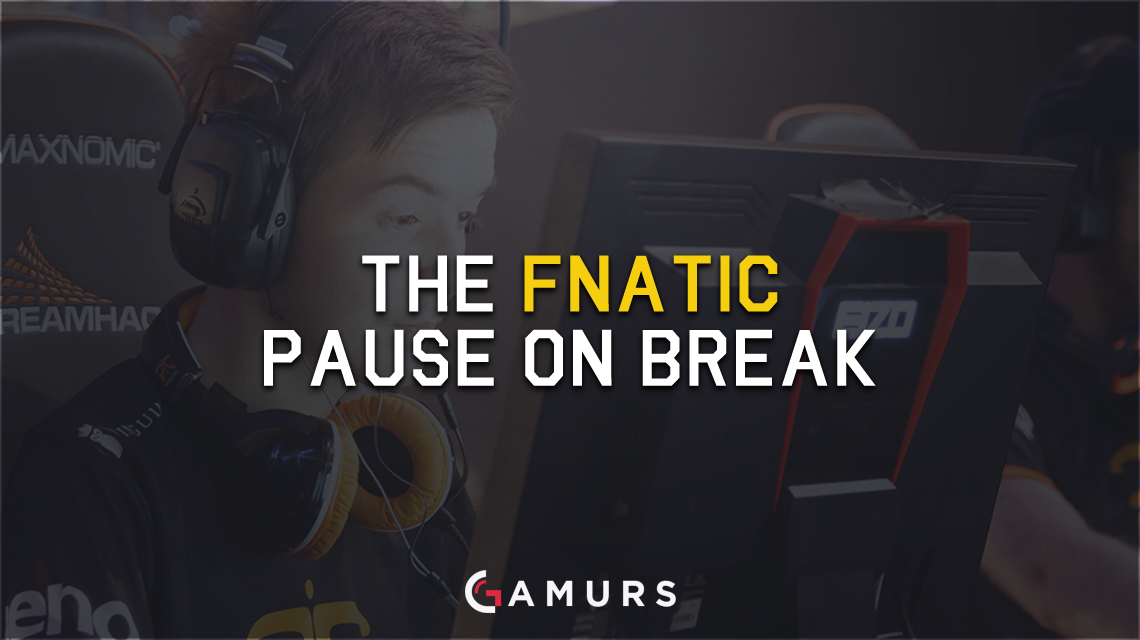 Fnatic Pause was a term coined by analysts to describe the devastating effects of a timeout in certain situations. Markus “pronax” Wallsten was able to make tense situations even more so for the other team while calming his team at the same time. Whether it be a streak of dominance, defeat or just a close situation, the Fnatic Pause had a way of giving Fnatic an edge.

Sadly, the Fnatic Pause has departed with pronax when he left the team approximately a year ago. Because pronax has not played on many big stages in the interim, the Fnatic Pause has all but died. This article will attempt to bring light to the extraordinary ability of these short breaks in action have. Also, the author will provide examples of where it has been useful in the past and where opportunities to use it have been missed.

The Fnatic Pause can be used in three ways. In fact, Fnatic Pauses can utilize multiple aspects at once. The first and most obvious reason for a pause is to change up the strategy and pace of the game. Maybe, the slow executes aren’t working out because the opponent is rushing positions and brutalizing the team in question. It is just as hard to identify when a pause is needed as it is to change up the strategy of the game on the fly. After a brief analysis of the team’s emotions and round score, an in-game leader should know that things aren’t working out. Through the pause, they can determine exactly what is going wrong and what can be done to fix it.

Exceptional teams will change up the pace entirely. If playing fast isn’t working out, they will play slower, and the opposite goes for teams playing slowly and not finding success. Often times, the opponent will get in a frame of mind that allows them to take advantage of the other team’s habits. Suddenly bringing that to a halt can lead to a shift in momentum and allow the team calling the pause to pick up some rounds for themselves. A change in pace could also indicate that the team calling the pause realized that they were playing into their weaknesses or their opponent’s strengths, not just a change of pace for the sake of change. Additionally, tactical pauses have been used, obviously, to discuss what tactics the team should run and how to modify the ones that they have been using. Tactics do not always work out the way that they were thought to in real games compared to how they did in practice sessions, hence the need to make a few adjustments during a break exceeding 15 seconds.

When people are getting heated or dejected, it’s time for a pause. Taking a step back for just a moment can help a person get into the right frame of mind in any sort of tense or uncomfortable situation. Pronax was the first, and really only, in-game leader to call a pause to calm his team down. In a team in which players have broken tables and keyboards, such a pause must have been responsible for winning many critical games. During the pronax era of Fnatic, the Swedish team had some ludicrously high percentage of game wins after taking a pause, which is yet another reason why teams should consider using pauses more often.

Whether Fnatic was up many rounds and wanted to secure victory or if they were down on the round count themselves, their pauses had a way of scaring opponents. Partially, it was the notoriety of the Fnatic Pause that scared teams, but knowing that a change of pace was coming scared teams as well. A change of pace scaring opposing teams is evident from other in-game leaders without the infamy of Fnatic seeing similar effects.

Very recently, at Dreamhack Bucharest in the semifinals between Cloud9 and EnVyUs, there were two pauses, both of which leading to game winning comebacks. On the second map, Mirage, nV was down seven to zero. They were attacking positions in ways that were not conducive to EnVyUs’ aim-oriented style. They could get some kills, but much of the team was getting caught out. After the pause, EnVyUs had revamped their play to something much faster and had used more smokes. After quickly putting utility down in key positions, they would take close range aim duels.

During the third map, Cloud9 was in the same position that EnVyUs was on Mirage. This time it was a little bit different because Cloud9 has a different set of players and therefore a different playstyle. Cloud9 was attacking positions in a disoriented, uncoordinated way. After the pause, they began to use intricate pincer maneuvers to overcome EnVyUs’ group of highly skilled players. Once surrounded, there is very little a player with good aim can do. Often times, it takes a pause for teams to realize and realign to counteract such things.

Neither EnVyUs nor Cloud9 are known for their pauses, but the effect of them was game changing. These successful pauses and adaptations prove that the Fnatic Pause wasn’t built on mumbo jumbo and still has a place in today’s meta.

The most glaring failure to use a pause as of late was in the ELEAGUE finals. There were so many points in that series where Fnatic could have taken a pause and changed the tide of the game, well at least pronax-era Fnatic could have. Perhaps, the reason why some of the Fnatic players went over to GODSENT was that they realized how valuable pronax is. Nevertheless, Fnatic started well on Cobblestone, but Virtus.Pro caught up. Eventually, Fnatic lost their lead and, with it, ten rounds in a row. They started with the very loose style that we associate with Fnatic, but after losing many rounds, they lost control of their economy and continued to buy without having a proper save. They did not stop to think about what was going wrong and repeated the same mistakes. By the time they took a pause, Virtus.Pro accelerated into Virtus Plow and there was nothing Fnatic could do about it.

Fnatic had two opportunities for pauses. They could have paused when they were up many rounds and forced Virtus.Pro to respect them. This would be a good plan against other, less resilient, teams, and Virtus.Pro is typically immune to that sort of thing. But it could have angered players on Virtus.Pro, like Wiktor “TaZ” Wojtas, causing them to play worse. Fnatic’s second and greatest opportunity pause would have been at the time when they started losing rounds. Fnatic waited too long and let Virtus.Pro get four rounds from game point before they finally won a single round.

The second map was a bit of a back-and-forth. Fnatic was playing mindlessly, and Virtus.Pro was playing like the unbreakable unit that they can be on good days. The team with the better tactics will always win in this situation. Naturally, any self-aware person would attempt to get things in order so that their team could play smarter. Fnatic called a pause, but it was not particularly productive. Virtus.Pro won the series, the first ELEAGUE season, and $390,000.

A pause in this situation should have been used to calm the team down and maybe to discuss how players should be playing their positions. If someone were too aggressive and was dying early, they would be told to hold back. Anxious players would be comforted and calmed down. Dejected players would be fired up. I can’t speak for the mental state of Fnatic after that pause, but they continued to play in the same manner in which they hit a roadblock earlier in the game.

On Cobblestone, Virtus.Pro should have used a pause after being down 9-2, but they somehow made it back anyways. This entire article is not to say that pauses are required to make a comeback or that their use ensures one, but rather, it is to point out that they are an underutilized resource. Please let these examples speak for themselves and not as a critique of specific teams and how they should be run. If anything, this article should be taken the same way that calls for coaching were last year, except pauses cost a team nothing.