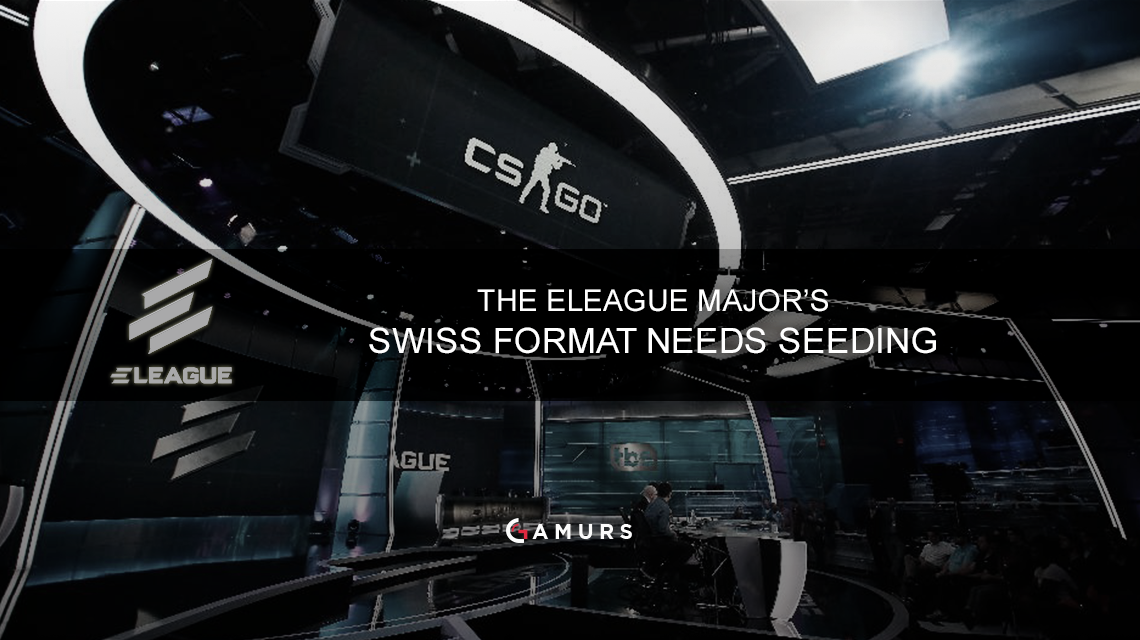 The Swiss opener of ELEAGUE’s 2017 Major has concluded with all eight of the new “Legends” spots set. However, in the opening days of the tournament, the uncommonly tough schedule of the highly touted OpTic Gaming called into question the viability of the Swiss system while not using seeding.

At the ELEAGUE Major, teams are partially seeded in the first round based on the Legends/Challengers binary, while all following matchups are randomized within individual pools with the stipulation that matchups cannot be repeated. As a result, the relative strength or weakness of an individual team’s schedule was highly variable from team to team. For example, G2, who dropped after starting 1-3, played all four of their games versus teams who would eventually qualify for the playoffs in Astralis, Virtus.pro, North and Fnatic, with the Virtus.pro and Astralis matchups standing out as being especially difficult. On the other hand, North qualified with wins over three non-qualifying teams in HellRaisers, G2 and GODSENT, while their two losses were to qualifying, but not highly-touted teams in Fnatic and Gambit. Likewise, all three of FaZe Clan’s wins came against non-qualifying teams in Flipsid3, Team Liquid and Team EnVyUs, while their two losses came from strong but world beating teams in Gambit and SK.

The use of “Legends” versus “Challengers” seeding has long been criticized as inaccurate due to the length of time between majors, which is doubly true for the ELEAGUE Major, specifically as it started over six months after the conclusion of the last Valve major, ESL One Cologne 2016. However, the greater problem is the randomization of pool-specific matchups in the remaining four rounds. Randomized matchups might add some entertainment factor by decreasing predictability and giving higher level contests earlier in the Swiss, but randomized pairings can inhibit better competitors from moving through the Swiss due to tough draws. The purpose of ELEAGUE’s Swiss should be to find the eight strongest teams at the competition. Having disproportionately difficult or easy schedules due to randomization obscures which teams are actually in the top-eight.

But with three chances of recovery, how poorly can randomized matchups mask the top-eight performing teams? The following image represents the “worst case scenario” of a 16 team Swiss with randomized matchups, where the strongest team of a pool faces off against the second strongest, while the third strongest faces the fourth strongest, and so on. Teams are numbered “1” to “16,” with “1” being the strongest and “16” being the weakest. In this scenario, the stronger will always triumph over the weaker team with zero chance of an upset. The winners of individual pairing will be placed on the left in green, while the loser will be on the right in red.

As you can see, with the worst possible randomization, the top-eight teams of the tournament would not actually advance through to the bracket stage. While the top-four teams would still advance through, the fifth, seventh and eighth best teams would not advance, despite winning all matches that they should be capable of winning. On the other hand, the ninth, 10th, and 12th ranked teams would all manage to advance, despite not finding a single upset, thanks to their far easier matchups.

However, the chances of the randomizer coming up with such disadvantageous pairings is extraordinary low. So how well does a Swiss with randomized matchups do normally? Using a random number generator to assign matchups in another five-round, 16 team Swiss, but still using ELEAGUE’s stipulation that matchups will not be repeated, the following images represent two simulated Swisses. Again, teams will be numbered “1” to “16” with respect to strength, still with zero chance of an upset.

In the first simulation, the perfect scenario of all of the top-eight teams making it through to the playoff is not attained, but it’s close. A combination of bad luck and the no rematch rules kept the eighth best team from advancing in favor of the ninth in the final round. However, in the second image, you’ll see that a Swiss with randomized in-pool pairings does manage to advance all eight of the top teams to the next round or, in ELEAGUE’s case, the playoffs. However, in the real world, upsets are quite common, especially in best-of-one Counter-Strike.

In the following two simulations, still using randomized pairings, there will be three upsets each, where the stronger team losses to the weaker team. Using a random number generator, three matches out of the Swiss’s total of 33 were chosen to be upsets with the first match of round one being assigned the number “1” and the last match of round five being given the number “33” with a sequential assignment of numbers in between. In the first scenario, matchups 13, 21, and 23 were chosen to be upsets, while matches 3, 13, and 24 were selected by the randomizer in the second. Upset matches will be highlighted in yellow.

Not only do upsets alter the chances of teams that are a part of the upsets, as you would expect, they also seem to warp the chances of non-participants due to the added variability.

But how well does a seeded Swiss do in comparison? The following image represents a totally seeded Swiss, however, in this scenario it is assumed that each team is seeded in exact accordance with its single tournament strength, which is not especially likely to happen in reality.

Without troublesome randomness mucking up the matchups, the tournament move forwards as expected with no surprises. All of the top eight teams advance, while the back half of the field is eliminated without exception. In terms of entertainment value, the opening rounds do feature many lopsided contests, but you’ll notice as you move into round three, there is far more parity in the pairings and the matchups stay reasonably tight moving forwards.

But how well does seeding handle upsets in compared to ELEAGUE’s more-or-less randomized Swiss? Again, using the low number of three upsets, two seeded simulated Swisses will try to handle the added uncertainty. In the first scenario, matches four, 13, and 33 will be upsets, while in the second scenario, matches four, 10, and 16 will be upsets per a random number generator. The fact that match 13 came up as an upset match three times out of the past four simulations was purely a coincidence.

The first version very nearly corrected for the earlier upsets but the final upset in the 33rd match of the Swiss nearly necessitates an imperfect final eight. The eighth best team does not qualify, while the 10th best team does, but in this scenario, the tenth best team is properly rewarded for their upset in the final round. The second scenario works out better with all top-eight teams advancing through, despite earlier upsets. From the examples shown,  a seeded Swiss better allows the strongest eight teams to advance through to the playoff, and also seems to more properly reward upsets without happenstance casualties elsewhere.

The triple elimination-esque structure of the ELEAGUE Swiss guards against best-of-one upsets and poor matchups from eliminating the better teams of the tournament, while giving all participants additional chances to succeed. Not using seeding just adds additional risk, with seemingly little reward other than the entertainment derived from the more chaotic proceedings. While individual power rankings, the HLTV ranking system, or Thorin’s ranking system are far from being perfect predictors of a team’s single tournament strength, good yet imperfect seeding still helps minimize the chances of a few debilitating pairings knocking out a playoff-worthy competitor.

With sticker money, Valve majors are the most financially lucrative tournaments of the year. They are the most prestigious and most viewed. Teams warp their lineups to attend them. They make some of history’s best games and produce some of its most memorable moments. And, for now, they remain at the core of the competitive experience. It’s an event far too important to voluntarily leave flawed.