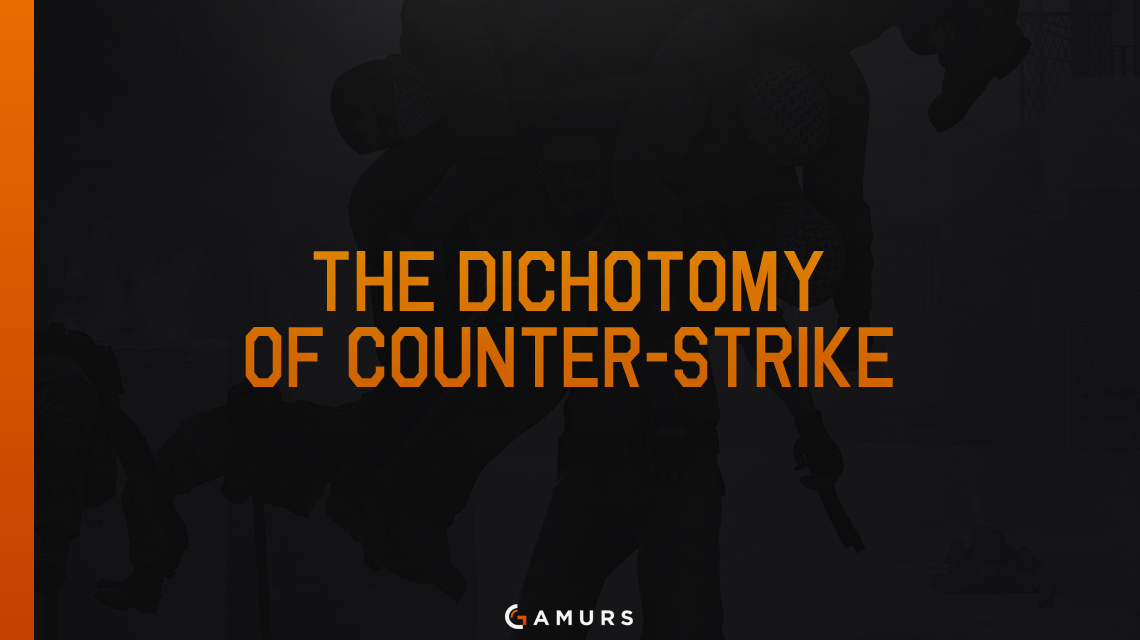 Counter-Strike: Global Offensive is often saturated with hatred, malice and disgust. On any competitive platform, whether it be Valve Matchmaking, FACEIT, CEVO, or ESEA, you’ll meet Counter-Strike’s finest.

You can encounter hackers: a player breed that cheats their way to victory. You can encounter match-throwers (AKA griefers): a special few who have no regard for fun competition. You can encounter players who definitely shouldn’t be in your talent level (AKA smurfers/boosters): players who are significantly insecure about their skill. And last but not least, you can encounter overall players with repulsive in-game attitudes and extreme opinions of others (such as racism, ageism, and sexism) that are nauseating enough to send you into a rage fit.

This aspect of the game is the worst since it can control whether or not you have a fun 45 minutes of play. It’s difficult not to let the community aspect of the game affect your level of play, but you have to put up with it anyway because it’s intrinsic to the game. Don’t feed the “trolls.” They’re sadists.

Now it’s time to discuss another thing: the game itself. First-shot inaccuracy, pistol one-taps, M4 rifles that don’t one-tap, jumping accuracy, running accuracy, faulty hit-registration, and random ping spikes are a part of the countless problems in the game. The list of things to complain about feels almost infinite.

In my honest opinion, provoking change can only be obtained when fans and professional players endlessly whine on community forums, such as reddit.com or hltv.org, about every minute detail Counter-Strike: Global Offensive has to offer. It was especially evident that this technique worked when the R8 Revolver was added to the game (players could easily spam the trigger while running and insta-kill with one bullet – it was a riot).

Asking Valve to change the game for the better is like asking Santa for a toy car and instead getting a toy tractor. Then you think to yourself on Christmas morning, “Did I ask for a toy tractor in my letter to Santa?” You wonder if this is a one-time exception where Santa gets your toys mixed up with your brother or if Santa is giving the better toys to your brother (cough Dota); except it isn’t – it happens every Christmas.

The best example of this occurring in Counter-Strike is with the new gun sound updates that have been rolling out all summer long. My guess for why Valve is making trivial updates with no substantial progress on the game is for larger, more expansive updates, such as the creation of a new Source 2 engine, but that’s me being optimistic. The most recent update that I could think of that provided something to improve gameplay was for rifle tapping accuracy. But for all I know, Valve’s priority could be a new design for the holiday chicken sweaters.

I’ve been playing Counter-Strike for a little over a year now. I’m currently at the Master Guardian I rank. I have clocked in almost 900 hours on the game and over 70 hours in the past two weeks (summer vacation is almost over for me). When I discovered this game last year at the same time, I joined GAMURS (formerly eSportsNation at the time), I knew I had found my new addiction. Call of Duty had become excruciatingly boring to me (after playing for eight years) and my favorite Garry’s Mod server had gone down, so I needed a new game to fulfill my pleasure void. A friend of mine persuaded me to try out CS:GO, and I caved.

I must say, the learning curve was brutal, but I was appreciative of it because it gave me something new to learn every day. The transition from a competitive console shooter to a competitive computer shooter was a revitalizing experience. I feel as though I’m still learning more and more about the game every day and that I still have so much left to learn. It’s both an encouraging and daunting road to become the best of the casually competitive player base. My (unlikely) goal is to become Global Elite before another Counter-Strike is released (which is extremely hard and improbable).

Playing Counter-Strike is a lot like an addiction. With any addiction, there are positives and negatives. For example, exercising and working out is really good for your health, but too much of it can put physical strain on your body. It’s entirely different with CS:GO.

I want to quench the thirst of a good, competitive game where I can genuinely say “good game” and actually mean it. The best games happen when the match is close and the odds of victory are in either team’s court. These types of matches beget insane and unprecedented adrenaline rushes every time. Yet incidentally, there are so many infuriatingly negative factors that hinder such a game from occurring. I don’t know how I manage to come back to the game without becoming instantly tilted. I guess it’s just for the love of the game.

Despite all the ubiquitous toxicity, incomprehensible nonsense, and minute imperfections, I can still confidently say this game is one of my all-time favorites, and I’ll continue to play it for as long as it stays absurd yet satisfying.

What’s your story in Counter-Strike? Let us know by shooting a tweet to @GAMURScom.