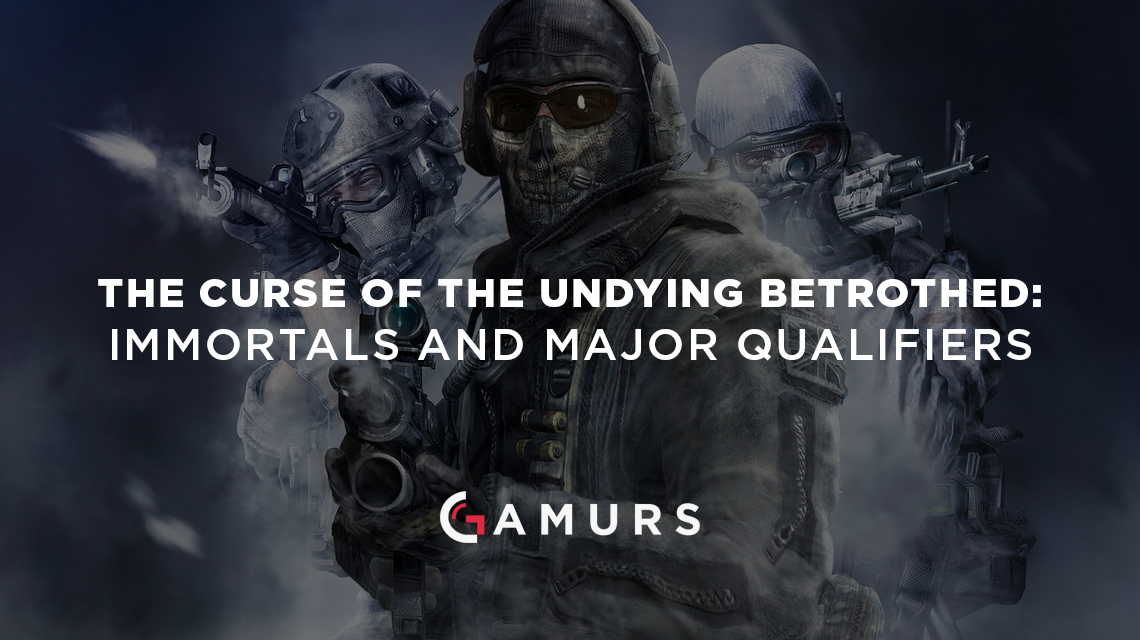 The story of an eternally cursed, never-dying, never-resting figure, bound to a life of constant servitude, longing or pain is a common trope within the human psyche. Prometheus, who after stealing fire from Zeus, was bound to a rock to have his liver eaten by an eagle every day, only for it to grow back overnight – forever. Sisyphus, was punished for his trickery and deceitfulness of the Gods by being forced to push a boulder up a large hill, only for it to roll back down and hit him as he reached the apex of his struggle. The archetype of the conscious undying, granted immortality but can never truly love due to the inevitable death of their significant other.

This idea is as sickening and anxiety-inducing, as it is thought-provoking and compelling, making it permeable in one way or another into any narrative thread. As such, what better CS:GO canvas to paint this trope on than a team who calls themselves ‘Immortals,’ and has an unfortunate trend that bares eerie resemblance to the stories of Prometheus, Sisyphus and the undying?

Immortals, originally known as Games Academy, then Tempo Storm, first generated their namesake through the ostentatiously confident, aggressive AWP play of their star Henrique ‘HEN1‘ Teles, and two of their core fraggers Epitacio ‘TACO‘ de Melo and Lincoln ‘fnx‘ Lau being signed by their internationally recognised Brazilian counterparts Luminosity Gaming in late 2015. This roster change, although removing two of their strongest players, incidentally bought in the battle-hardened passive rifler Ricardo ‘boltz‘ Prass and young, aim-star Joao ‘felps‘ Vasconcellos. To many people, Games Academy/Tempo Storm were merely the betrothed sister-team the impressive Luminsoity roster, and nothing more than an occasionally explosive tier-2 team.

A blessing in disguise, now with the benefit of historical hindsight, we know that this roster move led to the creation of a functional balance of roles, play styles and teamwork to make waves outside of the North America region – and contend as a top ten team in the world. A ranking that was unfathomable for the ‘second best Brazilian team’ – especially when considering that the South American scene was non-existent on an international scale 12 months prior.

The ‘click’ to this roster was at once, instantaneous and terrifyingly efficient. In the space of three online qualifiers, (Dreamhack Masters Malmo, IEM Katowice, and Americas Last Chance Minor) they literally beat every top North American team, and in some cases more than once. Big names – Cloud9, Team Liquid, Counter Logic Gaming, and smaller ones – Splyce, Winterfox, and Echo Fox were all subservient to this Brazilian team’s online will.

Felps proved to be an invaluable pick-up, adding a much needed aggressive partner in crime to help out HEN1 and Boltz was key to keeping enemy teams guessing with his slow, position-orientated, style of play that allowed for dynamic CT set-ups. Their team seemed to be a perfectly balanced ebb and flow of teamwork and individual dominance.

The Cursed Travel to Columbus

They were as hot as a team could be for playing their first LAN at the MLG Columbus Qualifier, and what a tournament to be in-form for, with a real chance of playing in the Major on American soil and alongside their brothers – Luminosity Gaming. This was the opportunity of a lifetime, given to a team who was non-existent on analysts and fans radars mere weeks prior.

Yet, they fell short.

An initial 16:13 loss to G2 Esports that had Richard ‘shox‘ Papillon firing on all cylinders could be forgiven, and their dominating win over American counterparts Selfless was to be expected. Unfortunately for Tempo Storm though, their last game to make it to the Major was against Flipsid3 Tactics, whose system not only worked but outperformed anything we had seen before.

Georgi ‘WorldEdit‘ Yaskin had an unprecedented performance on Train, with a staggering 130+ ADR and even the traditional anchors Aleksandr ‘Shara‘ Gordeev and in-game leader Andrey ‘B1ad3‘ Gorodenskiy having 100+ and 90+ games on the second map Cache respectively. To say the least, Tempo Storm where kncked out. However, it was not the end of the world, they had turned the vast majority of experts into apologists, and the words ‘fluke,’ ‘next time,’ and ‘one-off’ were bandied around with increasing frequency.

This idea that the MLG Columbus Qualifier was a fluke couldn’t ring more true in the months that followed. As the Brazilians gained more LAN experience, so did their confidence and ability to not only dominate North American play, but also against European talent. Their LAN resume grew by the tournament and spoke for itself in any discussion centred on their strength.

This string of results awarded them a place amongst the top six teams in the world – an incredible accomplishment considering their state at the Columbus qualifier only months prior. What’s more, this ranking added a cushy-thick padding of security in knowing they were easily capable of beating teams and breezing through the upcoming ESL One Cologne 2016 Qualifier.

The Cursed Travel to Cologne

The Cologne Qualifier would be played with the Swiss system – a tournament format that worked under the basic pretence of three Bo1 wins and you qualify, three Bo1 losses and you’re out. Despite this format not playing to the strength Immortals had in series, the odds were still stacked in their favour – more so than last time considering their proven talent on LAN and high-ranking spot in most peoples top ten.

Yet in spite of their clear increased experience, skill and confidence, they once again fell short.

However, this time there was no shifting of responsibility onto other teams. It was clearly a mental block that prevented them from making it into the Major. The consistent fragging core of HEN1, felps, and boltz was discombobulated. Rather than being the flawlessly dynamic unit of perfectly balanced roles, at the Qualifier it seemed when one player stepped up the other two would step down. The breakdown of this system led to Flipsid3 once again delivering the finishing blow, leaving them as by far and away the highest ranked team in the world not at the Major.
This failure to qualify once again did not slow down the pace of the Brazilians, scoring their most notable result to date – winning Dreamhack Summer – directly after the Qualifier. This win saw them beat both GODSENT and Ninja in Pyjamas in Bo3’s further adding to their stacked list of 2016 results, but also leaving a perplexingly vague question mark over their performances at both Major Qualifiers. It also propelled them to go on a similar post-Qualifier tear that happened after Columbus even in-spite of playing a time period defined by its oscillating inconsistencies.

The Cursed Travel to Atlanta

Considering this aura of unpredictability and tempered optimism, the environment was ripe for a team of the Immortals calibre to enter the ELEAGUE Major Qualifier of the year and come out on top. With same Swiss system as before and a favourable first round pick in Team EnVyUs, the stage was set for Immortals, now with addition of veteran ‘steel’ to replace ‘zews’ and make it into their first Major. Two wins in the first two days of play, one more win to make history as two Brazilian sides play together on CS:GO’s biggest stage. Their chance to become the most highly decorated betrothed sister team in the history of the game.

However, the cursed aren’t given respite.

The eagle comes back the next day, the boulder will roll down the hill, and loved ones will waste away.

These two wins acted as further tantalising punishment to the Immortally bound and cursed Brazilians. In a macabre and soul-crushing fashion, the Brazilians lost three Bo1’s in a row to exit the Qualifier empty-handed. A trio of failed qualifiers, padded with the opulent success that most teams can only dream of. Their true grit and ability against the toughest competition, on the most glorious environment, never tested. Only an unquenchable thirst driving them to slaughter opposition twice their size, then fall when presented with a minor roadblock in front of a glistening oasis.

This is the eternal struggle of the cursed Brazilian betrothed. Bound through the blood of their more successful countrymen, they are – in the present at least – the bridesmaids who will never rest, never-die and remain forever starved of their ultimate prize.