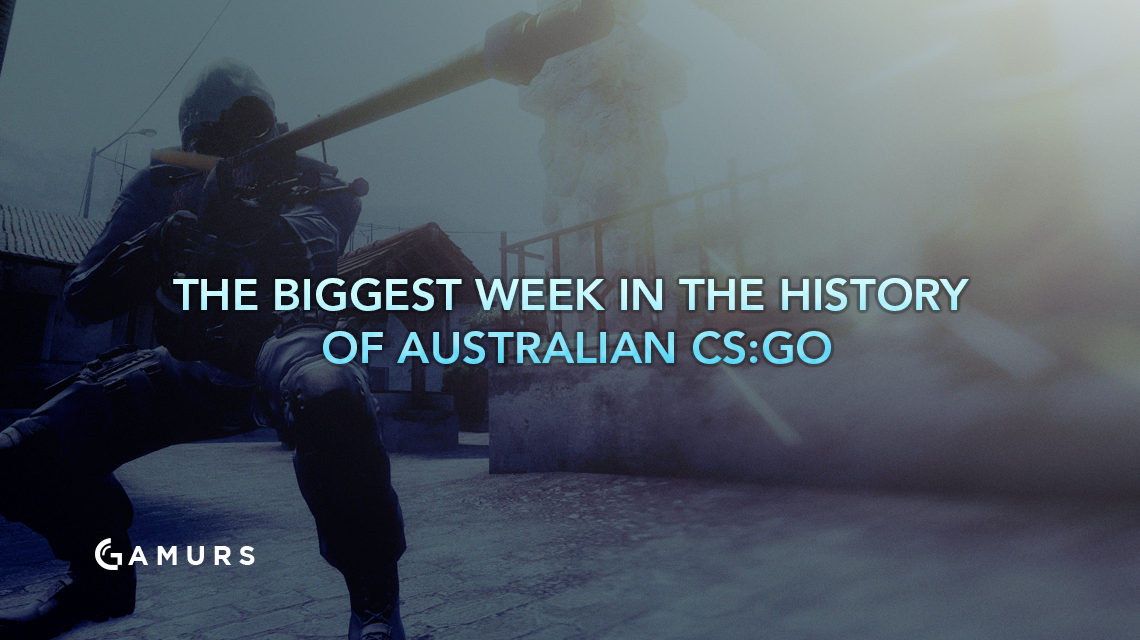 There are moments that define players, games which define teams, and tournaments that define dynasties. Then there are weeks of competition that can define an entire region. In the case of Australian Counter-Strike, this is one of those defining moments. For the next few days, nearly every single large Australian team, organisation, and player will be attending a LAN event on foreign soil. In the United States, Renegades will be playing at the iBUYPOWER Masters. In Malaysia, Avant Garde and Chiefs Esports will be playing at the ASUS ROG Masters. Also, in South Korea, Athletico BH, Immunity, and Parallax (admittedly of New Zealand descent), will be squaring off at the WESG Asia qualifiers. In three different countries, six of Oceania’s best teams will be battling it out against international competition.

Each of these different tournaments will be representative of each of the major storylines and narrative elements of their domestic scene. However, to sum it up in succinct fashion, it is put up or shut up time for the talent from down-under, as a cross-section of established and rising talent will be represented over the next few days of tournament play.

In the United States, there will be the fan favourites, and most well-known group of loveable Australian underdogs – Renegades. Since the exit of Chad “SPUNJ” Burchill from the roster in June of this year, the roster has largely failed to make a splash on the LAN stage outside of the Asian region, and has been rather confined to the promise of closely fought losses in online qualifiers, and moderate success in online leagues. The iBUYPOWER Masters will be the first opportunity for the Renegades roster to cut their teeth on LAN against the likes of international competition such as FaZe Clan. The group will be unforgiving due to the likes of the aforementioned FaZe, who are looking stronger than ever with Finn “karrigan” Andersen at the helm, and the Brazilian powerhouse Immortals to add the final height to an impossible hurdle of a group that in theory should be untenable. But crazier things have happened.

At their most recent LAN, the Asian Minor, both Justin “jks” Savage and Aaron “AZR” Ward looked to be resparking vintage form similar to their breakout performance at Gfinity Spring Masters 2 in 2015. It will require the absolute full extent of the increased firepower the roster has gained following the removal of both Spunj and Luke “Havoc” Paton since the start of the year, but if they manage to upset the group and qualify for IEM Oakland, it would represent the apex of the Australian scene playing against the apex of the world’s competition, an opportunity only a few of their domestic counterparts can put to their name.

ASUS ROG Masters in Malaysia will be hosting a tournament of significantly smaller status, but of equal narrative importance to the Australian CS:GO story. Both Chiefs and Avant Garde find themselves in a slew of semi-professional, low-order Asian talent, free of any apex domestic predators like Athletico BH, Vici Gaming, or Tyloo to stand in their way. Considering the scope and level of competition in Malaysia, it is vitally important that if not both, at least one Australian team makes an appearance in the grand finals.

Chiefs and Avant Garde have a chance to prove that the Australian scene – while not close to the level of North American, lest European competition on a whole – is above that of second-tier Asian CS:GO. This second-tier vs. second-tier domestic battle between the Australians and their geographically diverse opponents is important for understanding the strength of the region as a whole, rather than just the top two or three teams.

The final LAN event to look out for this week will feature the unfortunately weakened Atheltico BH, Immunity, and Parallax at the WESG Asia Pacific Finals. Due to the one nationality restriction of the tournament, and school commitments, every team will have a stand-in or temporary roster swaps, greatly reducing how much we can read into the results of the tournament. That being said though, there is still a road to the main WESG stage for some of Australia’s finest, and considering the only real opposition presently lies in MVP Project, Vici Gaming, and K23 (who has 3/5th of Gambit Gaming), this road shouldn’t be as difficult as initial impression would lead one to believe.

Atheltico has been the number one team in Australia while the Renegades have been away in the United States. With their consistent wins at domestic LANs, and domination at online qualifiers, they are a team full of young talent, and the ones to beat. However, their normal stand-in of Erka “erkaSt” Gantulga for Connor “chuch” Morgan will not go through due to his Mongolian nationality, which means that only three of the five original Athletico members will be trying to qualify this week. This is an unfortunate situation, who for a team at full strength, should be able to breeze through this qualifier.

On the other side of the coin is Immunity, who fall into a similar category of outside the top-tier like Avant Garde and Chiefs, regularly losing to Athletico in qualifiers and small LANs, but trading maps and series with those of similar skill. They will also be down a man due to his New Zealand descent, but will look to scrape into the main event by hopefully beating the best talent that many underdeveloped, yet burgeoning scenes have to offer. Due to the way the groups were sorted, it is unlikely to see Parallax make it out due to the best Malaysian team, Fire Dragoon, Immunity, and Vici all being in their group, but it is still refreshing to see New Zealand talent on any stage at all.

So even though many of these teams will likely fall and not make much of the opportunity of LAN play, it is probable that at least one or two moments of greatness might befall these domestic giants. Whether it be with an upset win, playoff qualification, or more, it will be the biggest week in the history of Australian CS:GO, and an important time in ranking the scenes talent on an international scale.

Do you agree that this is the biggest week in the history of Australian CS:GO? Let us know by commenting below or tweeting us @GAMURScom.

“Dude, we get it, you’re from Australia, chill your nips”. To submit complaints such as this, you can find me on Twitter @max_melit.