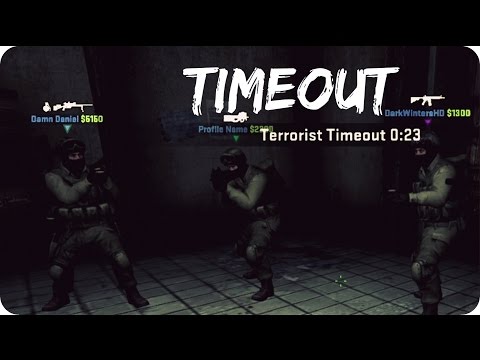 Using timeouts effectively is a vital part of every sport they are incorporated in, whether it be volleyball, basketball, or football. Counter-Strike: Global Offensive is no exception to that rule. Timeouts can put a halt to momentum, alleviate pressure, and allow time to tactically restructure. Yet something so simple as taking a pause in the action does require a bit of finesse. Since teams are only allotted one timeout per map, the timing of it’s use is crucial to a team’s success. Let’s breakdown what differentiates a good timeout as opposed to a poor one using examples from professional play. Popularized during the VeryGames era, Kévin “Ex6TenZ” Droolan’s style timeouts make the most sense in their logic and have been used by almost every team. The basics of this kind of pause is simple. On a round that one’s team would save, they initiate the pause, using it’s full duration to discuss strategy. Subsequently, during the save round, the team avoids enemy contact and uses the full extent of the round clock as an extra quasi timeout. This method effectively doubles the time given to the team to formulate a new approach to the match. However, this isn’t the only benefit to using pauses in this method.

The other side of the coin for using timeouts is that teams are giving their opponents time to strategize as well. Generally during a pause, the enemy team is maintaining vigilance and attempting to predict the new strategies. This focus to avoid being caught off guard will be at its highest the round right after the pause. A benefit to taking a timeout before an eco round is that it creates a gap in time where opponents could potentially forget what they’re preparing for on the gun round.

Certain strategies could become telegraphed if done immediately after a pause, such as quickening the pace of a round if they’ve been playing slow the whole game. Any area of a team’s game where they’ve been lacking presence becomes a likely hotspot in future rounds as soon as a timeout is taken. That makes the throwaway save round all the more quintessential to the success rate of future rounds. This method is very efficient if done correctly and helps mask a team’s new approach to the rest of the half.

What to Change & What to Keep

A key element of a timeout is not overreacting to the results of previous rounds. Maintaining one’s poise is crucial in being able to analyze past rounds. Teams that fail to maintain composure, more often than not, deviate too far from their strengths in an attempt to win. This is primarily from poor deduction as to why previous rounds went awry. Maybe an opponent just got a lucky blind kill, or a smoke was mispositioned. Now instead of throwing an entire strategy out the window, this is where one’s in-game leader has to find the right things to change and also keep. A rare insight of this can be seen from Sean “[email protected]” Gares during his tenure on Cloud9 at the ESL ESEA Pro League Season 1 Finals in their game against Team EnVyUs on Cache.

Cloud9 was down 2-8 on their Terrorist Side and took a pause to discuss what to change. From listening to the POV conversations, one can see that they don’t strategically deviate from their original approach. The team as a whole realizes that they’re losing rounds from poor late-round execution or misuse of certain utility, not some overarching strategic misplay. Therefore, they fix these small details that have huge implications on the round and go on to have a much better half.

If one listens to the full POV, during every freeze-time, [email protected] is constantly reiterating adjustments and things to be aware of. He maximizes every second of downtime to make the necessary adaptations needed to win. Being able to pinpoint the reasoning for round losses is paramount to an effective timeout. Otherwise, a pause could potentially be more harmful than beneficial to a team’s chances of winning.

Errors on when to take a pause are seen all too often. Some teams leave it until they are in a dire situation to take a pause. Some take it too early and stall their own momentum with it. Finding the right time to do so is unique to each scenario, but a general rule of thumb is to do it while you still have rounds to work with. When it is left too late, teams only have one chance at executing. However, if it were taken earlier in the game, there are multiple chances for finding success.

Another adage to follow is if two gun rounds fail, change the third. For example, in a game that is entirely one sided, where a team loses pistol and the next consecutive gun rounds, the score should end up being 7-0 or 8-0. This is the perfect time to take a pause and figure it out. Three gun rounds is more than enough data to figure out what isn’t working. Instead of waiting until they’re in a double digit deficit, take the pause while there are still rounds left to be played. By using the timeout early, you maintain the potential to keep the half close instead of giving it up entirely.

Timeouts are simple enough on the surface, but have the potential to be highly impactful. Adjusting the time and means one goes about a pause can determine just how influential it will become on the rest of the game. Maximizing the effectiveness of a timeout has become a hallmark of great teams. No score is unsurmountable in CS:GO, and taking pauses has been a vital part of some famous comebacks in competitive history.

It will be interesting to see how the new Valve Major’s timeout rule of four 30 second timeouts will change something so vital to the game. With drastically less time to work with, a lot of the previously discussed mental game could be removed. A 30 second respite doesn’t have the same amount of force to stall momentum or even allow players to compose themselves. Professional feedback on this area of the game will be highly anticipated and should be monitored closely. There is an art to taking pauses, and that shouldn’t be changed.

When do you think is the best time to take a timeout in CS:GO? Let us know by commenting below or tweeting us @GAMURScom.