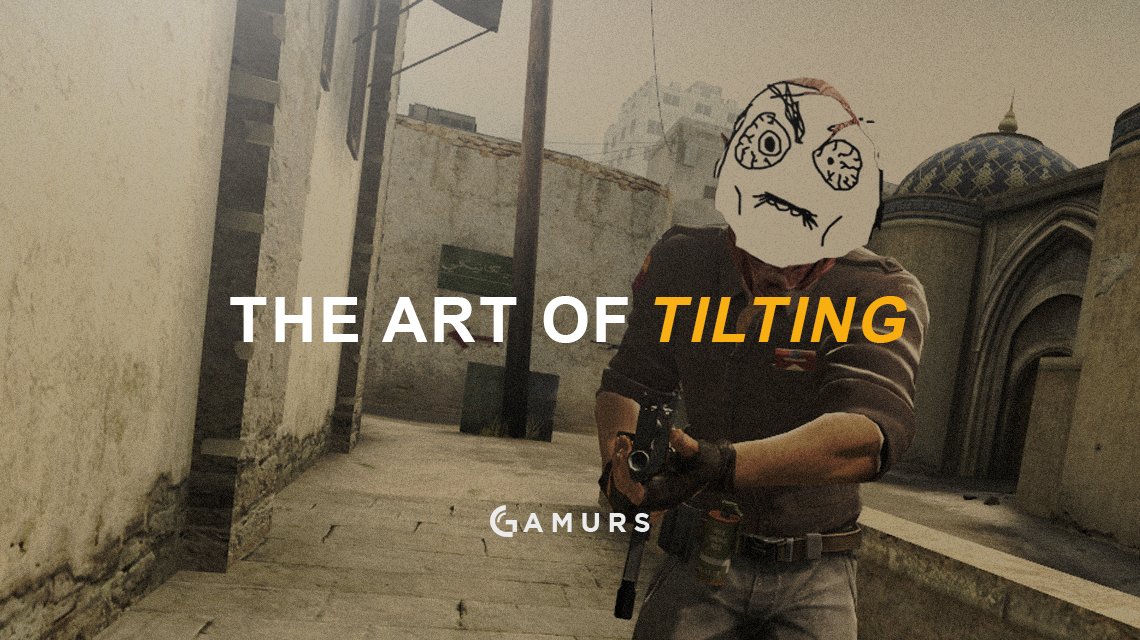 “Tilt” has two significant meanings that are both applicable to Counter-Strike: Global Offensive. In Poker, it’s termed as a mental state in which a player displays irrational anger due to a loss or an unlucky event. As a result, they’ll make bad decisions because they let their emotions influence their play style. In Pinball, it’s when the pinball machine recognizes the player tilting the machine (to prevent the ball from falling straight between the flippers) and the machine proceeds to freeze the flippers. The ball then helplessly falls through to reset.

In the instance of tilting in CS:GO, competitors can become livid and can possibly ruin their chances of winning a match. All it takes is one person to tilt the right/wrong way and it can spread like wildfire through the rest of the team. Tilting is purely a mind game with the power to break through any level of skill. Here’s a guide that’ll assist you in mastering every stroke in the art of tilting.

How to Prevent Tilt

The simplest, yet hardest, answer to preventing tilt amongst you or your teammates is to not let your emotions control your level of play. If you tilt, it’s almost inevitable that you will perform poorly in dire situations. It’s important to understand that some of the occurrences in Counter-Strike happen completely by chance and are out of your control.

Did a player kill you with a jumping AWP headshot from a distance? There’s nothing you can do about that. Were you outplayed by an enemy who used their knowledge to outsmart you in a 1v1? They’re better than you and you can’t control that. Did your teammate bait you in order to hoard kills for themself? Chances are they don’t know how to play as a team and that’s their issue, not yours. Seemingly random things can happen in Counter-Strike in the same way they occur in real-life. Understanding that absurdities can happen is essential to preventing poker-like tilt.

Some things are easier to explain than others…

Imagine that one of your teammates begins to start raging after a lost round. The best way to ensure that their emotions don’t influence yourself and your cohorts is to try to empathize with positive statements such as “Nice try,” “It’s all good,” “We can still win this,” and “Let’s make a comeback.”

Sometimes a few optimistic statements can go a long way in facilitating a win. If preventing tilt is impossible, it may be okay to sometimes allow them to get their anger out for a short period of time. Brief periods of anger can allow oneself to temporarily de-stress to further prevent tilt.

At the ELEAGUE Season One Championship, Fnatic’s high level of skill was absent as they fell to Virtus.Pro 2-0 after tilting.

So now you want to tilt the enemy team to gain an advantage. What do you do? You can throw a mid-game hail-mary to the RNG (random number generator) gods and pray that you pull off an extremely unlucky play against your opponent. Are you on an eco round? Try to buy a P250, Tec-9/Five-Seven, or Desert Eagle if your individual economy is healthy. A jumping pistol headshot around a corner (especially with the “Deagle”) can insta-tilt your opponent because of the combined absurdity and absolute unlikeliness that you’ll hit that shot. Want to add insult to injury? Do a jumping pistol shot through a smoke. At that point, it would be fair to assume your opponent’s blood will begin to heat up.

A play like Marcelo “coldzera” David’s may have led Team Liquid to choke a multitude of game points during the MLG Columbus 2016 semifinal.

It’s also possible to manipulate your opponents’ emotions through skill. You can try to make them turn on each other. A correctly played clutch, such as a 1v3, 1v4, or 1v5 with as many non-favorable factors (such as bomb-down, a retake, or a succession of kills) can easily persuade at least one person of the other team to pin responsibility for a round loss on a specific teammate. This can drive a team apart.

Another way you can tilt your opponent is through displaying your one-tapping abilities. Anecdotally speaking, training your agility in head-shotting has caused countless competitors of mine to spew hacking accusations in my current rank (Gold Nova Master). Once the accusations are out there, I can throw some light-hearted banter to influence their emotions even more, so that the game can go in my team’s favor. In this instance, my tactic is like that of a pin-ball machine because I’m recognizing a player tilting and I can add fuel to the fire.

This 1v4 by Spencer “Hiko” Martin at MLG Columbus 2016 gave Team Liquid a huge momentum boost in their lead against Luminosity Gaming. Unfortunately, they still lost the match.

Another unlikely playstyle to attempt is the best of both worlds: both completely “random” and extremely skillful. This is best displayed through the playstyle of Cloud9 player Jake “Stewie2k” Yip. His fragging style can be characterized as thoughtful and unconventional hyper-aggression. Conversely, his North-American Rank S counterparts have heavily criticized his playstyle as thoughtless yet successful. The best way that I would summarize would be well-contrived and ingenious. Stewie2k’s signature move is the combined utilization of smokes and flashes.

My personal favorite way of tilting the enemy would be to utilize my handy craftsmanship with the Negev Light-Machine Gun (I actually practice the spray in aim maps). When there’s a lot of money in the bank, it wouldn’t hurt to poke some fun at their skill with an overpowered 125 bullet clip of entertainment.

Here’s a quick summation of what I recommend to be resilient:

If All Else Fails…

Allowing yourself to learn from your mistakes in a rational fashion can help you develop on a greater scale as a Counter-Strike competitor. The only thing tilting you from reaching your full potential is yourself and your own emotions.

Do you tend to tilt, or are you player who causes others to tilt? Let us know by commenting below or tweeting us @GAMURScom.