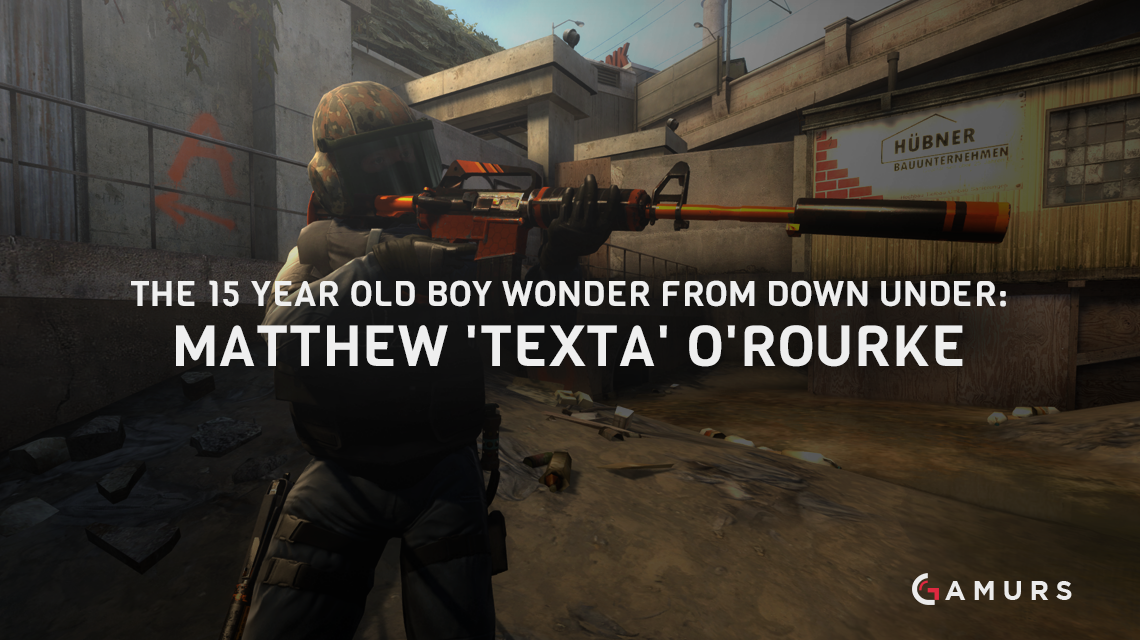 At the ZEN League Offline Qualifier that ended last weekend, one team in particular stood out from the rest – Dark Sided. Managing to take out the established names in Avant Garde, the new faces were helped greatly on the scoreboard by Matthew ”Texta” O’Rourke, who finished the series with 100+ ADR and 20+ kills in every game. What makes this more surprising is the fact that this was Texta’s first LAN event ever, and his team’s first LAN together as well.

If I’m not mistaken, this is your first ever public interview, and most people reading this won’t know you as a player, especially if they don’t closely follow the Australian scene. As such, could you please state your name/alias, team and age.

So, to start things off, how did you get into Counter-Strike?

Texta: I was introduced to Counter-Strike through my brothers at the age of six. I would sit there watching them play Counter-Strike: Source, which was the current CS at the time. When my brothers upgraded their computers, I took their old parts and [began] to start playing games myself. I dabbled in all sorts of games, ranging from Call of Duty to Runescape. I mostly played console games after getting an Xbox for Christmas when I was 10. Call of Duty was my first experience in competitive gaming. I played all the CoD’s from Call of Duty 4 to Call of Duty: Black Ops 2. I remember grinding up the ranks as fast as possible – racing my mates. But then, I came back to PC gaming after Battlefield 3 came out and my brother and I would farm 24/7 metro. He noticed how passionate I was at improving my skill and he introduced me to Counter-Strike: Global Offensive.

The craziest part about your story so far is that you’re so young! Even by CS:GO standards, where 20 somethings can be called veterans, you still have so much room to grow and develop as a player. Considering this, what are your goals individually? What does the future look like to texta?

Texta: Yeah, I’m currently the youngest professional CS:GO player in Australia. My current goals are just looking at the [ZEN League]. I really want to prove myself against the Asian teams, as I’ve only played Australians teams. At the moment, I’m just grinding. I mean, I still have three more years of school and trying to be the best in Australia sometimes gets challenging.

Without heaps of data to analyse, it’s hard for potential fans to understand what makes you special in-game. Therefore, to skip any convoluted VOD analysis, as a player, how do you define yourself? What is your playstyle like, and what aspects of the game do you excel at? What needs to be worked on?

Texta: I like to see myself as a very well rounded player, I can rifle and AWP. I think my main strengths are my movement and awareness. I’ve noticed I’m very good [in] sticky situations, and I think this is the key to my individual success.

As mentioned earlier, your team – Dark Sided – qualified for the ZEN League, where you’ll be with the three top Australian sides – Tainted Minds, Immunity, and Chiefs – amongst four Asian teams as well.  It’s safe to say that all the Australian teams/players present have a much more established name, history, and level of experience than your team/players. What are your expectations for ZEN, and how are you approaching the league, with the prospect of potentially also playing in other online leagues?

Texta: ZEN League and Dark Sided have been a massive opportunity for me as a player; I’ve never seen this kind of professionalism. To [play] against the likes of Chiefs and Immunity in the near future is amazing, but I’m more looking forward to seeing a different style of CS from the Asian sides. I think we’re coming into ZEN league with the mentality of “there’s nothing to lose,” but we plan to still put our best foot forward and see what happens.

What is it like for you playing on LAN versus online? Especially considering how you took to the environment like a duck to water on the weekend.

Texta: Man, playing my first LAN at one of the biggest qualifiers in Australia and performing so well was just massive for our team, and I loved every bit of it. We rose to the occasion and hopefully we will do the same for ZEN league.

Focusing more on your team now, what is the general philosophy behind Dark Sided? As a team, how do you approach the game and what mindset do you employ considering the overall lack of high-level experience?

Texta: In a game like CS, I don’t think experience is needed. Like if you’re confident in your ability and put in the hard work, you will always come out on top in my opinion. In terms of our mentality, I think we’re very fresh minded and that’s how we are improving so quickly. We don’t cloud our judgement with our egos and we learn from our mistakes.

Most, if not all, players on your team have commitments outside of CS like school/work, how often do you guys practice together and how do you most effectively use this practice time?

Texta: Me personally, I’ve put so many hours into this game and sometimes it may have been too much – but, I’m still here. With school and sport, I had to make a decision on what I wanted, [and that was CS].

That pretty much concludes the interview. Thank you for taking the time out of your day to answer these questions and, before we finish, is there anyone you’d like to give a shout-out to?

Texta: Just like to thank all my sponsors and Dark Sided for this opportunity.

You can follow the young rising talent on Twitter here and watch his team play in the ZEN League in the coming months.

Can Texta and Dark Sided continue to succeed? Let us know your thoughts in the comments below, or tweet us @GAMURScom.

Interview done by Max Melit who can be found on Twitter @max_melit or contacted through email: [email protected].