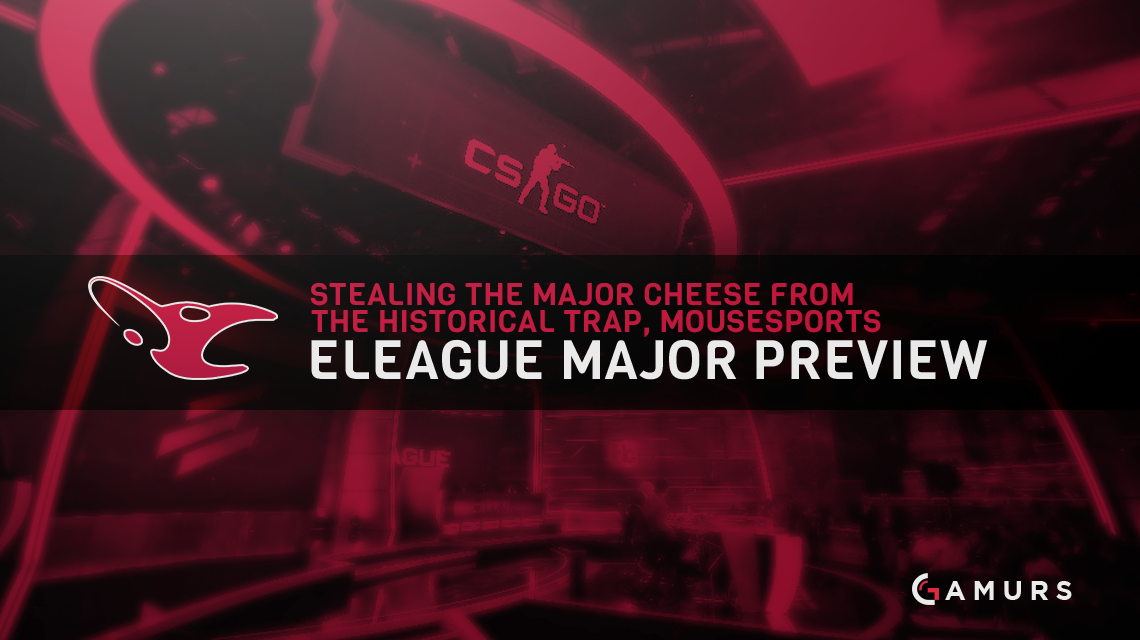 Mousesports are a team, who, like many other historically title dry sides, can be primarily defined by their failings. The important team-moulding game or series has always seemed to demystify any of their momentum or keys to success, and their roster moves saturated with talks of potential has almost always been followed with talks of “what could’ve been.” The few shining lights that have cropped up throughout the organisations tenure in the CS:GO space has only teased glimpses of what the team truly could be.

This is their historical stigma to bear though and in the present, but most importantly looking to the future, Mousesports are a team who could escape from their cage of defining failings. Their current roster show signs that maybe this time around for the Major they won’t be see the same pitfalls of their predecessors; rather, with a touch of luck, they will be able to steal that elusive impressive Major finish away from the traps of their own history.

As most newer fans of the game surely know by now, it is impossible to not mention Niko in the same breath as Mousesports, or more specifically, Niko and the large lack of Mousesports results. By most peoples account, he is comfortably a top five player of the year, and could for periods of time flaunt his position as the best player in the world. This narrative of Niko being the sole carry for his team and mousesports being only able to secure wins when the young in-game-leader chooses to put his teammates on his back is a highly publicised topic and has been covered at depth.

Yes, Niko has the skillset to be on of the greatest CS:GO players in the world.

Yes, Niko can be the sole firepower of his side and still win games.

Yes, Niko has teammates that are not on his level.

However, mouesports has not always been the Niko show. Before, the Bosnian’s Deagle graced international play on such a widely known scale, the historically German team had its fair share of talent and claims to be playing with “the next big thing.” ChrisJ, with his infamous online play showed hints of it being transferable to LAN with devastating efficiency. Nex was hyped even harder as a potential superstar following solid international showings and dominating domestic LAN play. Further back, tabseN had his share of the limelight briefly in early 2014, and gob b’s calling style and experienced tactical outlook earned him praise even in spite of any troubles in the server.

Each of these individual, “brooding” stars had failed to manifest themselves to the full scope of what most people expected. Nex could maintain a positive ranking, but was a far cry away from any domination. ChrisJ burnt brightly to begin with, but slowly dimmed to an evanescent glow. gob b moved on to failed North American ventures, and tabseN never made much of anything on an international scale. This is, in some senses at least, why fans of mousesports and people that have been following their story, glorified and pushed so hard on Niko as a carry and why a tempered optimism should be taken with their newest addition – Spanish rifler, IoWel.

Does IoWel have legitimate potential? For sure. Will he be a quasi-Niko force that will make this current mousesports roster a top 3 team in the world? More than likely not.

The former gBots and Penta player has been pulling his weight in his short stint in the line-up, holding his own against top European competition and being more than capable at lower levels of play. loWel seems to have had an effect on the side that has extended just beyond htis adequate fragging. The fledgling force of ChrisJ seems to have seen a resurgence as of late, following his solid ELEAGUE and EPL Season 4 Finals performances. An uptick that has only happened when the variable of loWel was added into the mix. This sudden return to force can most likely be pinned to a honeymoon, but an improved ChrisJ is an improved ChrisJ and Mousesports will take anything they can get.

The thought of Niko, loWel and ChrisJ working together as the fragging core, with denis and spidii being capable role players behind them is one that could be ingratiated with a potential escape from group stage play at the Major, something a German team has not achieved since Penta’s glory days in late 2014/early 2015.

Maybe this is overly optimistic though.

Their permanent ban is Nuke which adds an interesting dynamic against higher-tier teams that have prioritised the map; however, their historical reliance on Dust2 and Mirage could be their potential downfall when playing against teams that can easily match-up and beat them man-to-man. Their strategic outlook has never been a point of glorification since the exit of gob b, and considering the overall level of raw skill and aim talent that is attending the Major, Mousesports might find that simply having three above-average fraggers might not be enough to pull them through.

With that being said though, and in fear of treading a path already mushed to an unrecognisable pulp by other pundits, there is always the Niko factor. Whilst ChrisJ and loWel can put up impressive numbers and even impose their will on teams of equal skill, if Mouesports wants to make a statement at the ELEAGUE Major it will rest on the much-idolised shoulders of the indomitable Niko.

Even though adding hot Spanish spice to the ever-shifting and almost always flavourless Mousesports gumbo has seen the prospect of better consistency, real, top ten moving results seem to stem from the performance of Niko. This might not always be the case for Mousesports – a team defined by their historical short-comings and present reliance on one player – but with a simultaneously sceptical and hopeful eye we look forward to late-January at the promising thought of escaping this trap and stealing some Major cheese of their own.

What are your thoughts on Mousesports? What do you think they will place at the ELEAGUE Major? Let us know your thoughts in the comments below or by tweeting us @GAMURScom.