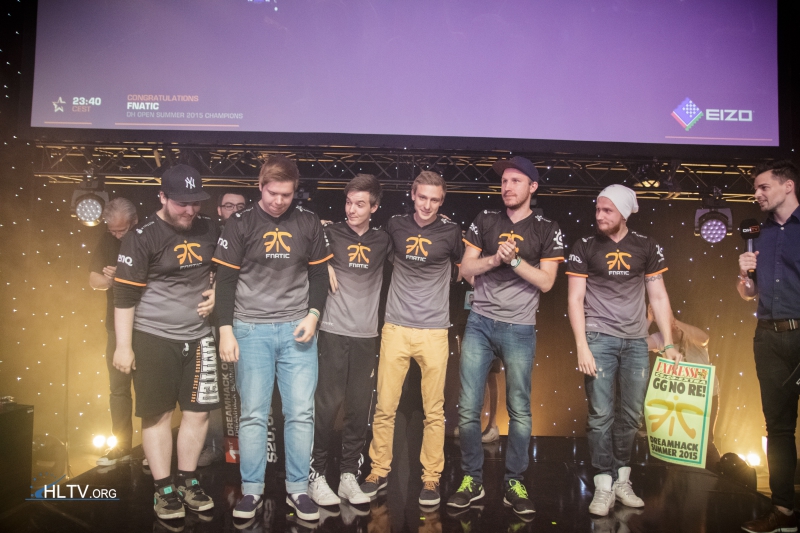 Much like Thorin says in his CS:GO top 10 world rankings counter-strike has always struggled with constantly updated world rankings. Although we do have the 100% accurate HLTV top 10 threads. For my top 10 for each month I look at online records for each team as well as their offline performances. Also the importance of a match comes into affect in my top 10 rankings. As a online match to see who goes to LAN would be weighed more than a match between two teams who have no chance of making it to LAN.

I plan to update my rankings at the beginning of every month.

In the month of June we had the following events: Fragbite Masters Season 4, Dreamhack Open Summer, Starseries XIII and Gfinity Summer Masters 1

Fnatic attended two of the four lans this month and made the finals of both of them. At Fragbite Fnatic lost to TSM in the finals 3-1. They dropped another map to TSM at Fragbite but still won that series 2-1. At Dreamhack Fnatic did not drop a single map they played against NiP in a best of three for the semi finals and completely destroyed them and in the finals they played Na’Vi and beat them with relative ease as well.

For online matches the month of June for fnatic was interesting because they dropped five maps in twenty seven matches but out of the five matches that they dropped two of them were to Titan and one to HellRaisers which are teams that anyone would think Fnatic could beat with relative ease.

TSM only attended one LAN this month which was Fragbite Masters Season 4. They beat Fnatic in the finals of this lan in a pretty convincing 3-1. Although TSM did beat Fnatic in a best of 5 offline final they need to win a few more against Fnatic before they can push for the top 1 spot.

Their online month was a little bit shaky as they lost 10 of their 34 maps while as Fnatic only lost 5 of their 27 maps. They only played 7 more matches online than Fnatic did but they lost double the amount of maps that Fnatic did which is another part of my reasoning as to why they are in second place and not first.

Envy attended Star Series and Gfinity this month. At Star Series Envy lost 3-1 against Na’Vi in the finals which definitly was a great match of counter-strike but it should have been a tournament that they won it really did not have any top tier teams there other than themselves and Na’Vi. At Gfinity Envy played well surprisingly the only series that they did not drop a map in was the finals against the struggling NiP lineup they did drop a map against mousesports Dignitas and Cloud9 in the earlier stages of the tournament but still won all of those series 2-1.

Envy had a huge amount of online matches in June they played a total of 47 maps and dropped 13 of them which is not bad but it is still better than TSM’s online record for the month. Out of the 6 times they played Fnatic online this month they only managed to beat them once. The gap between the top 2 and Envy right now is very big they are going to need to get back in their previous form if they want to make a push for top 2.

Na’Vi attended three out of the four LAN tournaments in the month of June. Fragbite was basically a waste of time for Na’Vi they showed up and got 2-0’d and that was that. Dreamhack on the other hand was a much better event for them they managed to make it to the finals against Fnatic where they got 2-0’d by Fnatic in the finals but they managed to place higher than the struggling NiP lineup who also got 2-0’d by Fnatic but in the semi finals. At Star Series on paper Na’Vi should have come in second place but on that final day of the tournament with the backing of the home croud in Kiev they managed to upset Envy in a truly great series of CS especially the Inferno map which went into quadruple overtime and Na’Vi eventually won 25-23.

Na’Vi played pretty terribly this month online. They have a huge problem even more than the other teams with getting ddosed and that really effects their play online. But still that is no excuse for a top 4 team in the world having a 18-23 record online. The gap between Na’Vi and Envy is very small all Na’Vi have to do to get above Envy in July is just play better online and keep the same performance at LAN but they are going to be missing ESL ESEA LAN this coming weekend.

VP played terribly at Gfinity losing to mousesports. They are still ranked above NiP because of how bad NiP have been in general but NiP can get back to the top 5 very easily.

VP have not won anything since ESEA season 18 lan back in April they will continue to decline unless the Virtus Plow can show up in the month of July.

NiP have not being playing well at all. At Dreamhack they lost to Na’Vi in the last group stage match which forced them to play Fnatic in the semi final which they lost in a somewhat close 2-0. Then at Gfinity a event they could have won and if they did would be above Virtus Pro but they did not. They got crushed in the finals by Envy 3-0 on the following maps: 16-10 on dust2 16-4 on Inferno and 16-9 on cache. NiP have really been struggling and if they want to regain top 5 they need to pull out some of the old NiP magic at the coming LAN events in July.

For their online month they didn’t play that much only twenty three matches but they had a better record than Na’Vi and VP which are above them but the gap between NiP and VP is very small and could change with even the smallest offline result.

Dignitas have beaten Titan on numerous occasions now and it’s clear that they are the better team. While Titan might have better online results Dig has beaten them enough now to pass ahead of them. At Dreamhack Dig failed to make it out of groups but at Gfinity they beat Titan again 2-1 and had a close series that went to 3 maps against Envy in the semi finals.

Dig didn’t really play a lot of online matches this month only 17 of them and their record is terrible they won around 33% of their online matches only.

Titan had yet another month where they failed to make the finals of a LAN event. They managed to make it to the semi final of Dreamhack where they lost to Na’Vi 2-1. At Gfinity they were lackluster again they lost to Dignitas giving them their spot above Titan and moving Titan down.

Titan plays a lot of online matches every month and just went negative this month by one game. They have a better record than both Na’Vi and VP who are ranked fourth and fifth but they need to start performing better at LAN for them to get above Dignitas or potentially even higher.

Mouse had a very good run at Gfinity 2-0ing VP then taking Envy to 3 maps and beating VP again 2-1 although VP are slumping at the moment mouse still deserve to be on the top 10 for that run to the semi finals.

Once again another bottom team with a better online record than Na’Vi and VP keep in mind mouse does play against some lesser teams so it’s not really that much of a factor with their placing.

Flipside bombed out of groups at Dreamhack. Then at Star Series they managed to make a run into the semi finals beating out HellRaisers and getting their first top 4 finish in a long time at a tier 2 event.

This July looks like it has a lot of good counter-strike in store for us viewers. ESEA ESL LAN is this coming weekend also we have ESWC Montreal from the 14th-16th of July. Dreamhack Valencia is in the month of July as well and so are the qualifiers for ESL One Cologne.