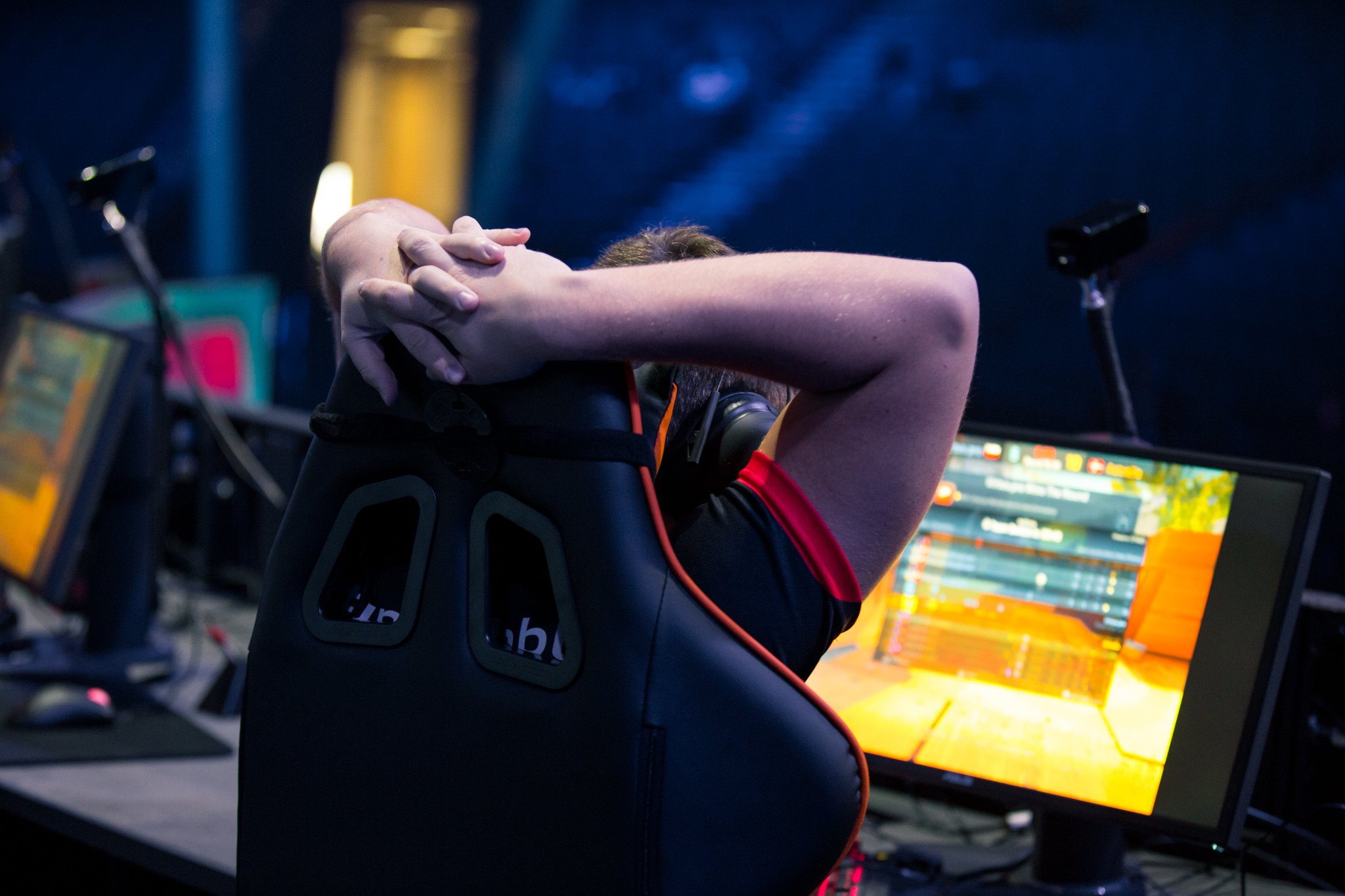 On Oct. 23 2016, Dignitas and Virtus.pro battled it out on Nuke, Cobblestone, and Mirage to determine the ultimate winner of EPICENTER’s half-million dollar tournament, but the next seven successive premier tournament finals featured either Train, Overpass, or both. This streak ended just last Sunday as neither map was picked in the FaZe vs. Astralis finals rematch at Starladder i-League Starseries Season 3. The five-month run was no coincidence.

Train and Overpass have increasingly become the conduits for the highest level clashes in Counter-Strike: Global Offensive. If any team can stand atop the pair, they should be able to topple the world.

Neither Overpass nor Train are the most popular maps in the current competitive scene. Yet they’ve been the two most-picked or played across the playoffs of premier tournaments so far in 2017. Between the ELEAGUE Major, DreamHack Masters Las Vegas, IEM Katowice, and Starladder i-League Starseries Season 3, we’ve seen 25 play of best-of-threes and a single best-of-five played in tournament playoff.

Over that period, both Train and Overpass have been picked or played in a majority of series, with Overpass showing up 17 times and Train appearing 14 times. On the other hand, Cobblestone and Mirage have been the most popular maps overall, but they’ve both been noticeably less popular in the playoffs. 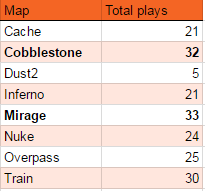 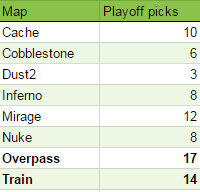 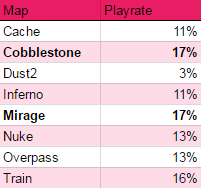 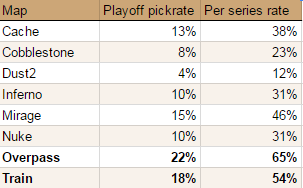 These results will be somewhat skewed because of the randomizer in the ELEAGUE Major, and the fact that not all “picked” maps in series play will be played. Also, as three of the four premier level-tournaments of 2017 have only featured best-of-one play in the opening stage of their tournaments, the pick-and-ban phase itself will also alter what maps are played in playoff series to some extent because of the effect of the extra bans.

The difference between the overall play rate and playoff pick or play rate, however, will be more affected by the actual playoff participants. Only half the field at these tournaments will be eligible to attend the playoffs due to eliminations in either the group stage or the preliminary Swiss System. And on top of that, the better, world-leading teams will move on further to the semifinals and finals and have an even greater impact on a map’s playoff pick rate.

For example, Cobblestone is frequently featured in the middle of team’s map pools, so it tends to be picked far more often in best-of-ones and groups stage games than in best-of three playoff matches. In fact, Cobblestone is very nearly the most picked map so far in 2017 at these high-level tournaments, but if you exclude Dust2, it is by far the least popular map in the playoffs.

While Cobblestone usually is not a team’s first pick, which hinders its pick rate, it also happens to the permaban of both Astralis and FaZe, who just faced against one another in the finals of IEM Katowice and Starladder i-league StarSeries Season 3. Consequently, Cobblestone was banned in the opening round of vetoes in four of the five playoff series at IEM Katowice and five of seven series at Starladder. 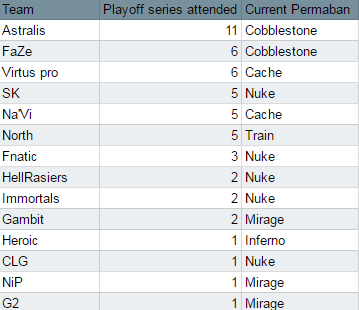 When Luminocity/SK was the clear No. 1 team in the world in 2016 with Lincoln “fnx” Lau still in the lineup, they succeeded in no small part due to their dominance on Train. After taking a surprise loss to G2 in the group stage of ESL Pro League Season 3, the world-leading Brazilian lineup went on an almost unfathomable tear on Train, winning all 17 of their next 17 offline contests on the map over the next seven months, a run that continued long-after their era had come to an end.

SK’s next loss on Train occurred during the classic five-man lineup’s last series with one another in the ELEAGUE Season 2 semifinals. SK lost 16-14 to the soon-to-be best team in the world—Astralis. But before the surging Danish squad could become the clear world leader, they had to overcome ELEAGUE’s ultimate underdogs in the tournament’s finale.

OpTic Gaming had recently won the modestly attended Northern Arena Montreal, but the underwhelming North American side had massively underperformed at DreamHack Winter and went into the ELEAGUE playoffs as just the 13th-best team in the world as ranked by HLTV. Nevertheless, armed with strong Cobblestone, Overpass, and Train picks, OpTic managed to survive every successive stage of the tournament with an undefeated record on these three maps. And in the finals versus Astralis, OpTic got exactly what they wanted. Map one was Train, map two was Cobblestone, and map three was Overpass. While Train fell to Astalis, OpTic was also able win their pick, Cobblestone, and surprised on Overpass to take home the series.

But even in Astralis’ two tournament exits since then, both maps have been a significant factor. Astralis played both Overpass and Train again versus Virtus.pro in the DreamHack Masters Las Vegas semifinal, but this time Virtus.pro was able to shock Astralis on Train to take the match 2-1. Then versus FaZe in the final of IEM Katowice, a rare first-round Overpass ban was enacted as both teams permabanned Cobblestone. The ban prevented them from playing their best map for the first time in a tournament’s finals. Astralis also chose to not pick Train, as they have moved away from the map more recently, and presumably considered FaZe’s own respectable strength on that map. Despite winning FaZe’s first pick of Mirage, Astralis subsequently lost on Nuke and Inferno to drop the series.

But beyond history and pick and ban strategy, why have Overpass and Train become the go-to stage for the apexes of competitive play over the last six months?

Sometimes teams gravitate towards a certain map simply if one or more of their players are especially potent or comfortable on certain CT positions, but perhaps these two maps are popular among the best teams in the world because their obstacles better allow a team find a competitive advantage through their expertise or mastery. In sharp contrast to the relative accessibility of Cobblestone and Mirage, Train and Overpass serve as valuable measuring tools for the best teams in the world due to their complexity. It can be extremely difficult to hold Train’s outside yard due to the sheer number of angles and entry points, but SK’s strong CT coordination under Gabriel “FalleN” Toledo’s “system” helped them dominate maps or make miraculous second-half comebacks for much of their much reign in 2016. Conversely, teams such as Astralis and Virtus.pro have been more recently able to take control of the map through the virtues of their T-sides, unleashing unbearable offensives through the map’s many avenues.

Then on Overpass, the T-side always has to cope with the possibility of very quick CT rotations which gives them fairly unique challenge. The terrorist usually try to respond with slow grinding attempt to take over the map with ever advancing map control, but CTs likewise up the ante with various boosts and forms of early aggression. Additionally, the best AWPers in the world such as FalleN formerly and Device currently, seem to have an incredible, unparalleled opportunity to showcase their skills and control half the map from Bathrooms, along long A, or further back in the A site.

If competition can express some sum of an individual or team’s talents, and if this game’s various internal constructions can actualize those capabilities to varying degrees, then Train and Overpass seem to be the best conductors of in-game greatness.

Sure, any team who is the best in the world on two maps surely should be a top competitor worldwide, but the team who can rule over this duo surely has to something more than just a deep map pool. These two maps are where the super-teams and scene leader slug it out to decide championships. They are the Sonnets of Petrarch and Shakespeare, the frescoes of Italian Renaissance, they are the difficult, constraining, highly competitive mediums through which the skill and beauty of the game can best be observed.