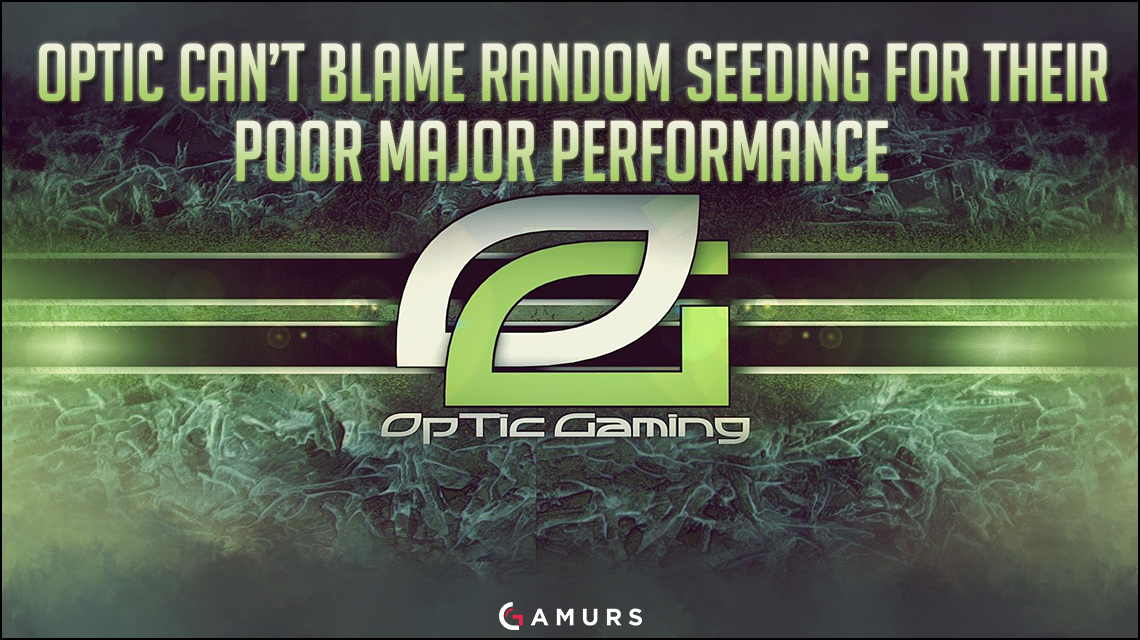 The Swiss system has led to possibly the most entertaining major group stage to date, but the use of random seeding for the majority of the group has raised a good deal of controversy as well. The primary piece of evidence being used in this trial against the Swiss system has been OpTic Gaming’s exit from the tournament. The North American hopefuls were dealt two swift losses in their group stage campaign by two tournament favorites – Astralis and Virtus.pro. They were then finished off by GODSENT in relatively convincing fashion. While the random seeding worked out poorly in OpTic’s favor, we cannot excuse their group stage exit due to this randomness.

Random seeding should definitely be changed to some system that uses a hierarchy of tiers or a generally agreed upon world ranking. All signs point in the direction of bringing seeding into big tournaments. However, until we reach this point, teams that we put on the pointy end of our rankings cannot use the format as a scapegoat for failing.

This logic doesn’t apply to teams who reside outside what we consider to be “elite teams.” For example, G2 Esports played all four of their games against teams that made it into the playoffs, yet they struggled greatly over the past few months. In their case, random seeding can be pointed at as the main factor of failing for pairing them with teams of disproportionate recent form.

The problems arise when a team who does wear the title of “elite” and boasts a place in most peoples’ top-five teams in the world fails to make it out of groups and the system by which they failed instantly becomes the antagonist. The random system isn’t to blame, but rather the failing of OpTic’s stars, the better preparedness of their opposition, and the inherent weaknesses in their own game.

Overall, the CT sides of OpTic were abysmal. Out of all their games at the major, they won 50 rounds in total, with only 19 of those rounds being on their CT side. While admittedly this is in part a factor of the maps they played (Cache, Train x2, and Cobblestone), which can favor T’s, the majority of their flaccid defensive efforts can be pinned on their fallen stars.

Statistically speaking, Tarik “tarik” Celik is one of the 10 worst performing players at the major so far, sitting at number nine before the playoffs start. He would be even further down this list was it not for a decent, but inconsequential, game against Flipsid3. The same can be said for Oscar “mixwell” Cañellas, who also resides at the tail end of the statistical rankings.

While these statistics aren’t an explicit list of “x is better than y,” it does put into context just how poor their performances were in the group stage. Tarik, Mixwell, and Will “RUSH” Wierzba are meant to be the roaring furnace which powers the neon green OpTic machine. They are the majority of the fragging core that OpTic uses to stage their executes from and maintain bomb sites with. While Rush maintained fragments of his form from both ELEAGUE and the ECS S2 Finals, his partners in crime went missing in action.

Mixwell continued to drift farther away from his rifling roots and continued to have an impact on T-side with the big green, but he wasn’t as effective in locking down bomb sites – best exemplified by his key missed AWP shots on Train – as CT caused issues for OpTic throughout. Tarik also stuck to his roots of aggressive T-side play and exploding onto bomb sites, but struggled to hold his own in duels against Astralis and Virtus.pro.

If their stars brought any semblance of inspiration from their previous two big LANs, then it is not unreasonable to see a world where the words “Legends” and “OpTic Gaming” are plastered next to each other. OpTic was hyped as a team who could play dark horse to the favorites, yet when they received their matchups against these same favorites, they grossly underperformed. What’s more, when they played against two teams that were theoretically far below this “dark horse” level, they went the way of their region and failed to deliver again.

However, this bottoming out by OpTic was somewhat expected. As broken down in WallabeeBeatle’s piece “OpTic Oscillating,” OpTic is a team who often peaks periodically but then never maintains their success. Their failings at ELEAGUE seem to support this notion. Make no mistake about it though, while the Swiss system’s major flaws might have put OpTic in unfavorable situations, this is not an excuse for a categorical breakdown of their stars, CT sides, and confidence levels when they needed them the most.

Top-three teams in the world don’t have stars that reside in the bottom-10 statistically, or CT sides that struggle to hold-up. ELEAGUE was OpTic’s major trial-by-fire, and in spite of what hand they were dealt, they burnt miserably.

Written by Max Melit who can be found on Twitter @max_melit or be contacted through email: [email protected].