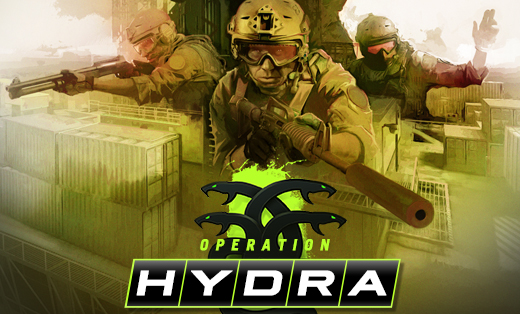 It’s been almost a year since Operation Wildfire ended on July 15, 2016, and the agonizing wait for the next Counter-Strike: Global Offensive operation was definitely worth it. Welcome to Operation Hydra.

Operations in CS:GO are similar to DLC, except the majority of it is community-made, and they typically last about three months. Maps, game modes, and other in-game nuances are spiced up by creators, while the developers, Valve, play a role in ensuring those ideas come to fruition. Valve also adds reward systems such as weapon drops and exclusive operation coins to give the operations a little more purpose.

Operation Hydra officially began last night and it’s expected to last 18 weeks, finishing around the end of September. Here’s everything you need to know about Operation Hydra.

Valve added more than your typical campaign and coin to Operation Hydra; an entire event was thrown in the mix as well. The free-to-play events feature contains game modes that are available for play in alternating weeks. The modes include War Games, Wingman, and Weapons Expert.

Headshots Only: Kills are earned by shooting a player’s head (Deathmatch)

Two-versus-two best-of-16 on bomb defusal maps that mimic retake situations on one site.

Competitive play with a restriction–buying a weapon makes it individually unavailable for the rest of the match.

Agency, Black Gold, and Insertion make their return to CS:GO while Austria, Lite, Shipped, and Thrill make their debut. These maps can be played either in Hydra Events or in matchmade casual/competitive play.

The 30-mission co-op campaign can help you earn Guardian XP, which contributes towards your Operation Hydra Stars and Operation Weapon Drops. When you earn Operation Stars, you can also obtain weapons from the Cobblestone, Cache, Overpass, Gods and Monsters, Rising Sun, and Chop Shop weapon case collections. To earn those stars, you complete Guardian missions. Before jumping into your hunt for Operation Stars, you’ll need to purchase the $5.99 All-Access Pass to get these features.

Completing missions and building up Operations Stars can earn you a Bronze to Silver (five stars), Gold (18 stars), or Diamond (25 stars).

This personal diary shows your competitive statistics and Guardian missions.

If you have any questions about Operation Hydra check out the FAQ section on the Counter-Strike blog.