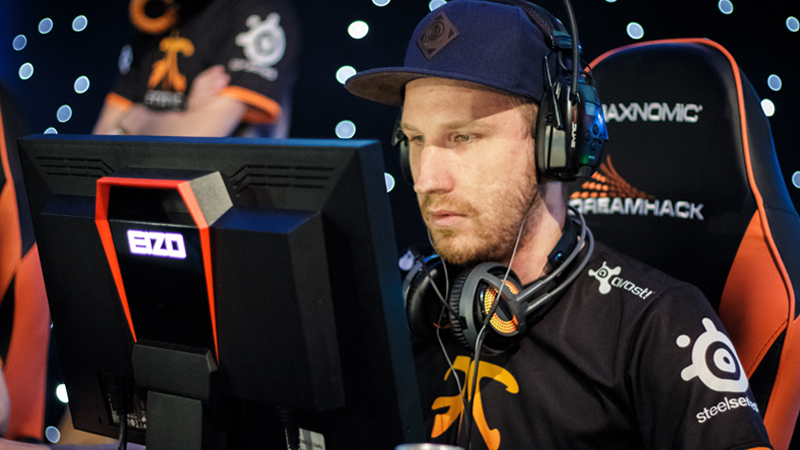 Olofm is the best player on the planet, as has been since ESL One Katowice, almost 7 months ago. During this period Olofm was the main carry on Fnatic, and ultimately played a significant part in raising his team to the status of the greatest ever in Global Offensive. Olofm’s legacy is only rivaled by three other players: GeT_RiGhT, shox, and KennyS. Where Olofm lies within this elite four is certainly open for debate, personally, I feel the addition of his second major title pushes him past shox and only behind GeT_RiGhT – The greatest to ever have played the game – and with every day that passes, Olofm edges ever closer to the ultimate accolade.

Eventually, as the other greats of the game have done before him, Olofmeister will drop off, and be forced to resign his title of the best in the world. Three names – for me – stand out as the most likely candidates to surpass the master himself, these players are Olofmeister’s chasing pack.

device is the best Danish player ever in CS:GO, throughout his time on TSM and FeTiSh’s dignitas, he’s spent almost all of it as the number one on his team, with only brief stints from dupreeh dethroning him. device for raw skill level lies within the top 5 in Global Offensive history, his peak level can be devastating, capable of out aiming almost any of the elite teams star players. This has always been the case – since at least early 2014 – even if he was unable to convert his immense skill into titles.

Only shox and Olofm are in the same league as device when it comes to versatility, the Dane is monstrous with any gun in the game, currently standing as one of the world’s best riflers, device is one of few that could go full time awping and be nearly as effective. Adding on his pistols – even though somewhat inconsistent – being at times incredible. device is one of the most rounded players ever, a threat at any point in the game, and a force few can stop.

With the skill set of device’s you’d assume he’d be considered up there as part of the elites in the history of the game. However the Dane’s career has not been without flaws, for well over a year – since early 2014 – device was branded as a choker. In online games and group stage matches he’d display his incredible skill level, regularly destroying the opposition and presenting the prospect that his team should be feared late in tournaments. Unfortunately, for the longest time this prospect remained but that as device, on almost every occasion in high pressure matches would crumble to a shadow of himself earlier in the event.

Devices physiological change has been one of the most impressive I’ve seen in any sport, let alone esports. The Dane has now won multiple events, being the highest priority star on his team, with the most pressure to perform. Even while his teams form has dipped lower the past few months device has only continued to improve. In almost every series TSM plays device is not only the best player on his team, but regularly the number one in the server, even while TSM are losing.

Currently – I think – device is the second best player in the world, second only to Olofm himself, out of the three names I’ll put forward, device is the most skilled and rounded. Yet he still must accent to another level to acquire the title as the world’s best, Olof has carried his teams to titles while at times been the only player on his team putting up big numbers. The Swede has another gear, allowing him to nearly single-handedly drag his team over the line whilst other players are floundering. To best Olof, device must replicate this, finding a way to have so much impact that he can carry the load of multiple underperforming teammates, and push TSM to more international titles.

The Star in the Fnatic of Old

DreamHack Winter 2013 was the first Global Offensive major, and to the surprise of the world the tournament wasn’t won by huge favourites in Ningas in Pyjamas and VeryGames but by Fnatic. This isn’t the Fnatic of today, rather with schneider and Devilwalk in the place of Olofm and krimz. However soon after their historic major victory, the team gradually regressed back to around a top 5-7 level, unable to remain at elite status. On this line-up JW was the most skilled and touted by many as the star of the team, yet JW’s inconsistencies in big matches held him back from this title. Flusha – although less skilled that JW – was indisputably the best player on the team, and a near lock to land on his feet following the roster change.

Flusha has been and is still famed as an monster in after plant situations, his cerebral sense is incredible, breaking down 1vX situations into favourable 1v1 duels in which he executes excellently, and subsequently wins an astonishing percentage of the aforementioned situations. Flusha is mainly known for his rifling, although in the few occasions he has awped he’s played well it simply wouldn’t make sense have him awping over JW or Olofm, on many teams he would make a decent utility awper. Pistols are also strong for the Swede, however they seem to stand out more on force buys rather than in pistol rounds. Flusha is not as well rounded as device or Olofm yet can still have comparable game impact.

The current Fnatic team has seen its stars rotate within the line-up, upon Fnatic’s accession to the world’s best, krimz and JW were the primary carries of the team, with krimz as the best player on the planet spearheading the new Fnatic to their first international titles. As we entered 2015 the carries saw a shift as Olofm began to turn up the heat, during this period Flusha’s performances were some of the worst of his career, cultivating in him having a terrible event at X-Games Aspen. Before long Olofm was peaking, and was the premier star on the team, with Flusha and krimz rotating on a near series basis as the number two on the line-up.

It was at ESEA ESL PL S1 Finals that Flusha put his foot down, surpassing krimz to become the second best on the team, at this event Flusha was probably the MVP, a near unthinkable accolade coming into the event. ESL One Colonge saw the Swede play the best CS of his career, he was Fnatic’s scoreboard topper in almost every series, and in true Flusha esque fashion he won multiple near impossible clutch situations, on truly the biggest stage. Flusha was the MVP in Germany and he is now statistically the best player in Global Offensive at the majors.

The difference maker in Flusha’s accession has been that – coming in the last few months – his skill level increased by a considerable margin, add this to his incredible late round ability and you’re cooking with gas. The problem when assessing Flusha comes due to advantages he gains because of his team mates around him, The Swede plays with one of the most skilled line-up’s ever assembled in G:O, as well as not to mention having the best player in the world alongside you. Throughout Fnatic’s previous few events we’ve seen that Flusha is capable of out shining Olofm, yet it remains to be seen if he can repeat this on a consistent basis, Flusha is now an elite level player, and should he continue his recent trend, he’ll edge closer to the thrown of Olofmeister.

The Engine Behind the Plow:

For over a year after the competitive Global Offensive scene began GeT_RiGhT was known to have the best intuitive sense, seemingly having timings on his lurks so perfect, that to the untrained eye you’d think he was cheating. The Swede was unrivalled until early 2014, this is when we saw Snax first break into stardom.

Virtus.pro’s first big win came at EMS One Katowice 2014, where they dominated the entire tournament, dropping only a single map in overtime. During this tournament Pasha played the best on the team, and was the MVP of the event. Snax and byali also gave good showings but Pasha was a cut above. This gave people the impression that Pasha was the main carry, with the rest of the team set up around him. While the latter remained true, it soon emerged that the play Pasha had brought to the major was unsustainable, his level was too inconsistent to be considered the best on the line-up. Before the end of 2014, Snax had established himself as the number one on Virtus.pro.

Snax probably has the strongest intuitive sense of anyone in Global Offensive. While many of other candidates use information gleamed from their teammates to make reads, Snax on many occasions, with zero information about the enemies positioning, can make mind boggling plays, putting his team into advantageous scenarios. The Pole is another well rounded player – although less than device, shox and Olofm – his rifles and pistols are extremely strong, with the M4A1-S he was particularly good at abusing his positioning, shooting multiple opponents from behind before going down himself. Currently it’s yet to be seen how the switch to the M4A4 will affect him.

This year started strong for Snax, and he continued this way until late spring-summer, during this period the Pole was consistently a top 10 player and on multiple occasions postured around the top 5 on the planet. However things went quickly downhill for Snax as he moved into a poor rut of form. This period coincided with Virtus.pro’s worst results of the year, outlining the importance of Snax’s performances to elevate VP’s level. Yet with increasing good showings at ESEA ESL PL S1 Finals, CEVO S7 Finals, and ESL One Cologne, slowly but surely Snax was finding his feet again, possibly linked to neo’s switch to primary awping, relieving pressure from Snax to carry the team. However these performances proved to be the calm before the storm, at ESL Dubai Snax played his best event since at least Gfinity G3 2014, having a significant role in Virtus.pro’s victory at the event. Snax was the clear MVP of Dubai, a performance not to be taken lightly.

Snax has proven himself to be an extremely clutch player, it’s very unlikely you’ll see him go missing in a series. Currently the Pole in on an upward trajectory, where he’ll level off is largely unknown. My fear for him is that the inherent inconsistencies of Virtus.pro could limit his play, not being able to consistently give Snax the resources he requires to thrive. Also, having a mainly intuitive game is dangerous, at any time his form could significantly decrease, with no set procedures to help him recover. As for being able to overcome Olofm, I see it as unlikely, however Snax’s upside can be incredible, and should the variables align, Snax is certainly capable of capitalising on them.

Only Time Will Tell:

Olofmeister’s reign appears in little threat of ending soon, even though Flusha has outperformed him in recent events the difference has been extremely marginal. Players such as Dosia, Nico, and f0rest looked at times to be near GeT_RiGhT, however they all failed to ultimately overcome him, it wasn’t until shox rocked the world that GeT_RiGhT was definitively dethroned. Whoever achieves the monumental task of surpassing Olofm, will likely become another great of the game. The three players above are already part of the world’s elite, yet earning the title of the best is a different beast. Only time will tell who will be the next one. These are the players battling for the throne, this is Olofmeister’s chasing pack.

Any feedback is appreciated, feel free to tweet me @LynxxCS. Thank you for reading.