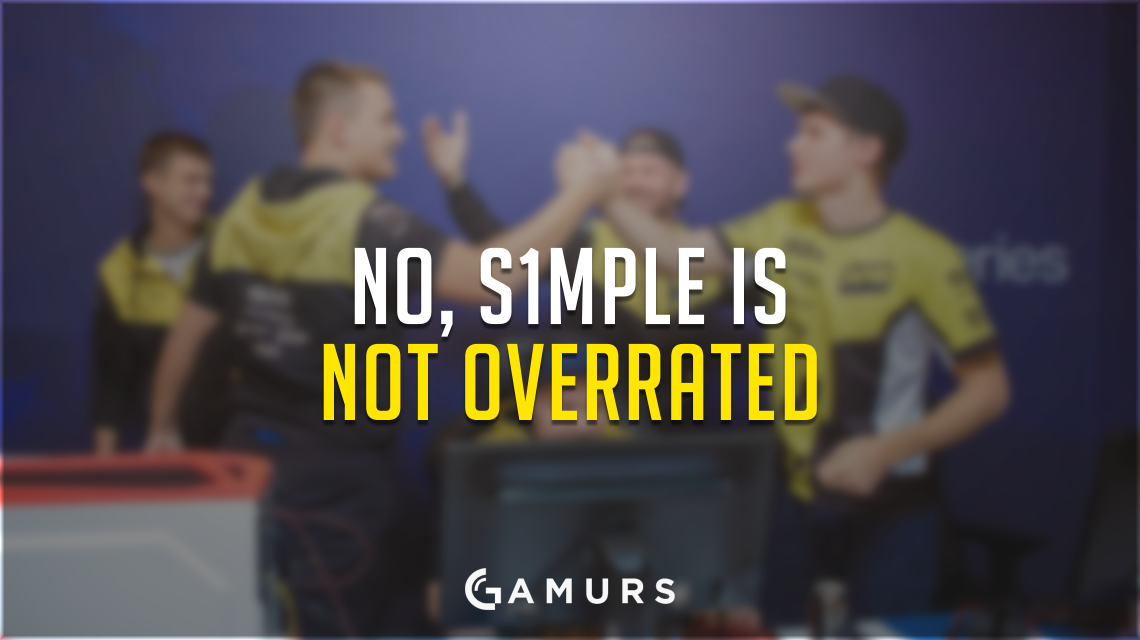 When a player reaches the level of hype that Oleksandr “s1mple” Kostyliev experienced around his move from Team Liquid to Natus Vincere, there are bound to be some people who say that the hype and high expectations are undeserved. Whether they do this to look wise and insightful if they turn out to be right, or just do it to bring down those in the limelight, I do not know. What is certain, however, is that some people will say that a player is overrated when they receive enough accolades, much like s1mple did for his consistent god-like plays around his move to Na`Vi.

Na`Vi’s acquisition of s1mple was perhaps the most highly anticipated roster move of this year, as it united the best CIS team with the best CIS player. At the time of the move, Kostyliev had recently played a large role in Team Liquid’s second place finish at ESL One Cologne 2016, and had also been instrumental in their semifinal-reaching run at MLG Columbus earlier this year. Two hugely unexpected placings from Team Liquid with s1mple on the team, and the Ukrainian being identified as the culprit for their much-improved placings, caused an unreal amount of hype to collate around the player. When word dropped that s1mple would be playing for Na`Vi, a team in itself hugely talented and among the world’s best, the scene went mad.

Na`Vi’s offline debut with their new lineup was set to be the StarLadder i-League Season 2 Finals, fittingly taking place in Ukraine, which is s1mple’s home country. The stage was set for Na`Vi to show the world that they were the next powerhouse, and that they had finally added the missing piece to their team which would allow them to reach the level of world champions which had always evaded them in Global Offensive. Yet, a stage so eloquently set for the birth of a future world championship-winning team was not utilized, and Na`Vi crashed out of the tournament in last place, extinguishing the hype that had previously threatened to engulf the team.

It was in these dark hours for Na`Vi where the word “overrated” was muttered in regards to s1mple. If he was so good, how had Na`Vi just been eliminated from a tournament due to losses against TyLoo and Astralis? The power of the Na`Vi team that looked so good on paper with s1mple’s arrival was being questioned by some, and the world was uncertain if the young star deserved the tremendous amount of expectation that was poured onto him. Cynics spoke ill of Na`Vi and their potential for scene domination following their travesty in Kiev, but s1mple would prove them wrong.

ESL One New York approached and Na`Vi was set to play in the eight-team tournament filled with titans and world champions. To prevent tarnishing their team’s reputation further, the side needed to show that they were in fact as good, if not better, than the Na`Vi that almost won DreamHack Cluj-Napoca and MLG Columbus. Doubters of s1mple and the team’s talent wrote Na`Vi off from winning the event; the result at the StarLadder Finals was their evidence for denying that a team of so much firepower could challenge the top-tier opposition in attendance. ESL One New York was do or die for Na`Vi. It was the event that would confirm if the team was world-class, or if they had picked up an overrated pug-star.

The “Big Apple” was the destination for Na`Vi to win the type of prestigious tournament that had eluded the team for so long as, surprisingly, they had never won a tournament with a $250,000 prizepool or more in CS:GO. Victories over the likes of SK Gaming and Virtus.pro paved the way for Na`Vi’s long-awaited win on a huge stage.

Na`Vi’s victory was brilliantly evocative for the older players on the team and the new, as it represented the veteran squad surpassing their drought of large tournament wins, and that the addition of s1mple was a turning point for the team. Despite being a relative newcomer onto the team, it was s1mple who was the decisive factor for Na`Vi winning in New York, a fact that turned a lot of the doubters of the team into fans. The young superstar finished the event with a +54 kill/death ratio.

A lot of disbelievers started to believe in him, but not all. Remove yourself from the emotions that followed that Na`Vi win and you can see why some people still had their reservations with s1mple’s addition to the team and how good he could be. It was just one win. Only one good showing. As good as the team performed in New York, their loss in Kiev still blemished their record. A case could still be argued that s1mple was overrated by claiming New York was a one-off.

EPICENTER was the next event for Na`Vi to attend offline and was their chance to prove that New York wasn’t a one-off. Although Na`Vi lost in the semifinals, it was to the eventual victors of the tournament, and it was in close fashion, making the tournament still a success for them as it showed their win in New York wasn’t a fluke.

Kostyliev finished the semifinal series with more kills than anyone on Na`Vi or Dignitas, despite his team losing. It wasn’t just the semifinal s1mple excelled in either. The Ukrainian wizard was a constant thorn in the side of any opponent of Na`Vi, delivering MVP performances game after game. Perhaps the most potent point to share from s1mple’s monstrous EPICENTER campaign was that in Na`Vi’s loss to G2 that ended 16-11, s1mple dropped a ridiculous 37 kills. Although Na`Vi lost the semifinal, s1mple won the trust of fans that he really is one of the best players in the world, and in no way overrated.

Across the event, s1mple performed at an epic level, fitting of the quality and name of the event he performed at, highlighted by his 37 kills in 27 rounds in a loss against one of the teams with the highest skill ceilings in the world, G2. It was on the backdrop of EPICENTER that s1mple proved he is an elite player destined only for the top, and demonstrated to the watching world that he deserves all the hype that follows him, and more.

So no, to any doubters left out there, s1mple is not overrated. He really is one of, if not, the best in the world at what he does, and has proved this on huge stages in vital games. Yet, his dominance has only just begun.

Do you agree that s1mple is not overrated? Let us know by commenting below or tweeting us @GAMURScom.

The author, Cam “clootch” Brierley, can be reached on Twitter at @clootch_CS