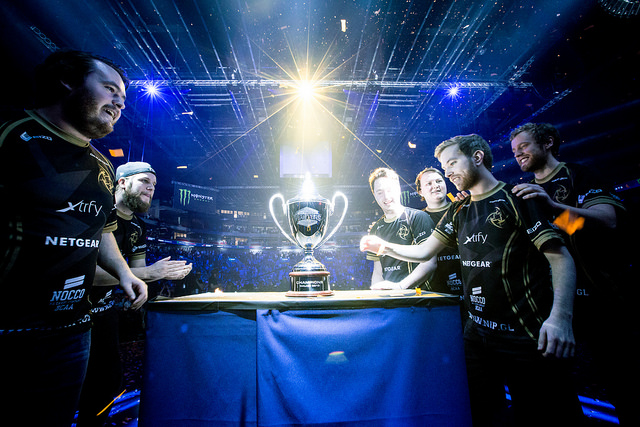 Two teams. Two dynasties. Two legacies. NiP and Fnatic. The majority of CS:GO history was written in their triumphs and victories. AT ESEA ESL Proleague 3 Finals, for the first time in a long time they will have a critical showdown. The last time the two met near the height of their powers was at ESL One: Katowice 2015 over an year ago.Tomorrow they will face off again after an year of changes to see who will take the crown as the best Swedish lineup in CS:GO today.

Yet the battle tomorrow isn’t just a fight to see who is the best for the weekend or the best in Sweden. It is a battle of history, of legacy, of ideology. Both teams reached the pinnacle of CS:GO, yet their paths to get there and their paths since couldn’t have been any more different.

The Rise and Fall of Magic

NiP are the most beloved team to have ever graced CS:GO. Their dynasty reigned from 2012-2013. They were briefly displaced by VeryGames for the latter end of 2013, but came roaring back to take their spot as the best. The lineup that made this happen was Patrik ‘f0rest’ Lindberg, Christopher ‘GeT_RiGhT’ Alesund, Adam ’friberg’  Friberg, Richard ’Xizt’ Landström,and Robin ‘Fifflaren’ Johansson.

Together they accrued eighteen titles, one major and the famous 87:0 winning streak. It was a team that that could win any round during any game on any map at any time. It didn’t matter if they were on the opponents map or down a huge deficit in rounds. They could come back and win seemingly at will at any point in the game and it was dubbed “NiP magic.” There was a shamanistic quality to their victories as if this team were fated to win.

Magic could not last forever. Fifflaren retired from the team. In his place came Mikail ‘Maikelele’ Bill for a brief period of time and then Aleksi ‘Allu’ Jalli.There were a few glimpses of the old NiP Magic, but the team was too stubborn in their ways. They continued to play as if they were the best players in the world by a mile and they slowly spiraled downward and by the end of 2015, NiP was ash.

Where NiP was loved, Fnatic was hated. Hailed as the sith lords of CS:GO, their reign of terror ran from 2014-2015 in arguably CS:GO’s most competitive era. Nothing could stop them, not love or faith or belief or magic. In an era where casters and organizers touted “The sixth man” effect of crowds in CS:GO, Fnatic fought every big game of their career as the away team. They went everywhere against everything and proved that greatness was what mattered. The five-man roster that silenced a million: Jesper ‘JW’ Wecksell, Robin ‘flusha’ Rönnquist, Freddy ‘KRiMZ’ Johansson, Olof ’olofmeister’ Kajbje, Markus ‘pronax’ Wallsten.

What made Fnatic special were three things: Teamwork, adaptability and composure. This was a rare breed of team that could change the identity of the team based on who was playing the best at any given time. The first players to carry the team were KRiMZ and JW. Later olofmeister became the star of the team as he gained more consistency and eventually became the best in the world. At the Major,flusha showed up huge and proved his clutch in the highest pressure situations. They were the world’s strongest five man unit, not just based on skill, but on their superb team play and synergy. At ESL One: Cologne 2015, they pulled out miracle comebacks predicated on pauses. Pauses in which they said nothing. They only composed themselves and remembered that they were the greatest and nothing not even the Virtus.Plow or EnVyUs up 14-7 could stop them.

After that dominating year, pronax left at the end of the year as he had reached the goal of becoming the best in the world. He wanted a new challenge and left the team to go form a new Swedish lineup called Godsent. In his place, Fnatic recruited Dennis ‘dennis’ Edma,, former LGB teammate with KRiMZ and olofmeister and they made a completely new dynasty.

The Age of Threat

From the ashes of NiP, rose a phoenix. NIP made two roster changes. Allu left the team and was replaced by Jacob ‘Pyth’ Mourujärvi. Pyth was an alright pickup who has come to fit into his role. The big game changer though was Björn ‘THREAT’ Pers. On January 1st, 2016, THREAT was officially hired as coach and new in game leader of NiP.

“I pretty much changed everything.” – THREAT

After an year of banging their heads into a wall with the exact same tactics and the exact same playstyle, NiP finally gave in. If they still wished to be champions, something had to change. And that change was THREAT. THREAT immediately had the ear of the team from his days as a former teammate of both f0rest and GeT_RiGhT and coaching experience with team Acer.

The biggest change was discipline. He fixed the overaggressive tendencies of the team, changed roles so that GeT_RiGhT was also entry fragging as well and changed the entire economic game of NiP. In 2015, Nathan ‘NBK’ Schmitt from team EnVyUs said they had broken the game with the new force buy strat. The plan was to force buy as often as possible and break the economy of the opposing team and sweep through the game.

For a brief time that worked and EnVyUs had changed the game. However once teams got used to it, the game slowly shifted back as teams like Luminosity and Na`Vi found holes and started to counter it. At DreamHack Malmo, THREAT killed the force buy. With the right setups and the correct discipline, THREAT consistently beat the force buys of every other team. This made it so that the other team kept digging their own grave as they essentially kept throwing their money for low percentage odds to win against NiP.

On top of that, THREAT’s disciple on the team showed as he made sure NiP players didn’t over commit to the hunting of guns in rounds they had already won. While this let the other team carry a gun moving forward, it also tempted them into doing another force buy and then losing an extra round again. Which they al inevitably did.

The third aspect THREAT affected was taking the in game leader role from Xizt. Previously Xizt has been in a weird purgatory. He was the in game leader of the team who contributed in kills. Yet neither the leadership nor the frags was having much impact on the game. Now that he has been freed from the role of in game leader, Xizt has shown a new form of skill and won crucial maps that eventually led to NiP’s victory at DreamHack Malmo.

No one was sure what to make of the new Fnatic as flusha took up in game leading for the team. After winning their first six events, everyone knew that Fnatic had returned as the uncontested best team in the world. The team chemistry had changed as they had gone for a much more loose skill orientated lineup with a heavier emphasis on the forcebuy. They became a superior version of EnVyUs with the teamwork of the old Fnatic. They were nearly impossible to beat and going into the MLG Major they were the big favorites to win.

At the peak of their powers, when they were supposed to win the Major, tragedy struck. Olofmeister, their best player and the consensus best in the world, had an injury. Olofmeister still played at the Major with the injury, but the team structure wasn’t strong enough to make up for the impact that was lost in the game. Their run ended with Astralis taking a pause at the 15-2 scoreline as Astralis got ready to win one more round to move forward. The map ended i16-5 in Astralis’ favor. A stark contrast to the miracle pauses they took to win the Major at ESL One Cologne.

With olofmeister sidelined, Fnatic had no choice but to find a replacement. First they tried Niclas ‘PlesseN’ Plessen, but that didn’t work out. For now they’ve gone with John “wenton’ Eriksson and now have their coach Viktor ‘vuggo’ Jendeby doing the in game leading to free up flusha to focus more on the game. They go into ESL with something to prove. That even without olofmeister they are still one of the best teams in the world and there they will face teams such as: NiP, Astralis, and Luminosity in a fight for the championship.

This tournament is where everything finally comes to a head. NiP have proven their strength on LAN with their win at DreamHack Malmo. They have changed the face of their team with THREAT and are now poised to take the crown from Fnatic. Fnatic looked to be the most dominant force in 2016, but the loss of olofmeister may be too much for the lineup to handle. It is at this tournament we will see the crowning of kings. Either NiP will rise up from the ashes like a phoenix and reclaim their crowns as the best Swedish team in the world or Fnatic will prove once again that they are still the greatest in 2016 and the revived NiP was just a momentary revolt against their reign.