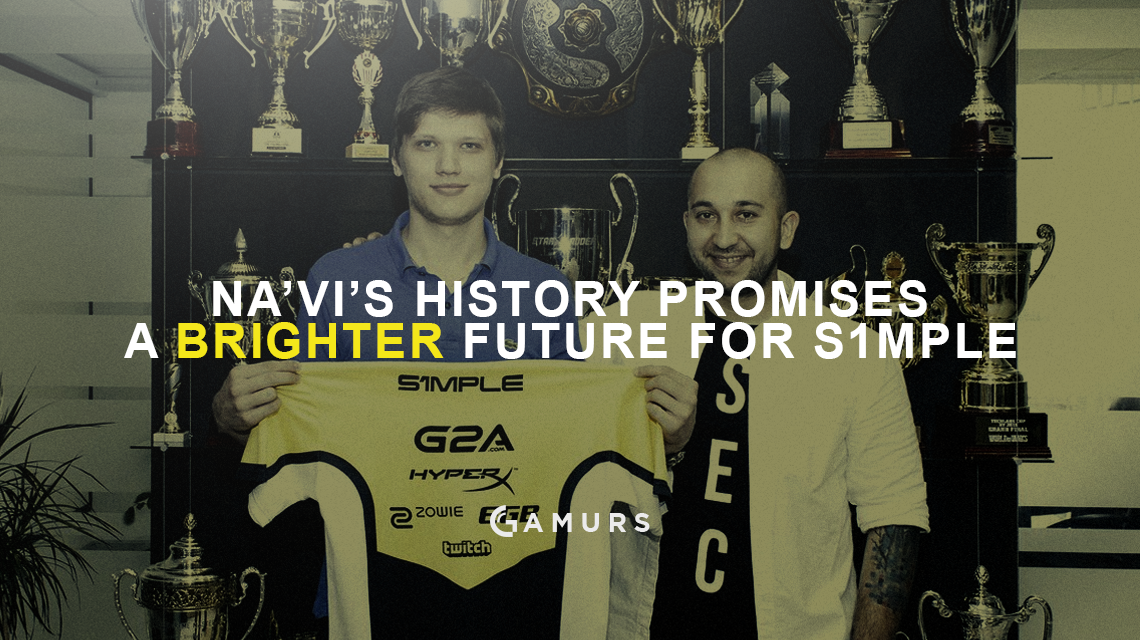 There has been much skepticism with regard to Oleksander “s1mple” Kostyliev ever being able to play with the team. Natus Vincere, the best Ukrainian team and a top team in the world, has refused to touch the reportedly toxic, yet talented, player. That is until now. After Na’Vi’s eclipse passed, they reached out to s1mple hoping that they can begin a new chapter of greatness.

There is no doubting how gifted s1mple is as a player, as there is no doubt of how cursed he is as a person. s1mple often expects a great deal from his teammates and does not understand that they cannot play as well as he does, one of the best players in the world. Obviously, that is unreasonable, and s1mple’s hotheaded attitude makes this ludicrous notion even more difficult for those around him. It often leads to him bashing others and being uncooperative to the point where his teammates speak out about his behavior and he gets kicked from the team. Despite s1mple’s failing history to play with the team, I think those on Na’Vi have an even greater history of combatting such stresses.

There are so many things about this roster change on Na’Vi that remind me of the roster change of taking out Sergey “starix” Ischuk for Egor “flamie” Vasyliev. Both starix and Daniil “Zeus” Teslenko left only when there was no chance of Na’Vi becoming a Major winning team. Even greater is the similarity of flamie and s1mple, or should I say the old flamie.

flamie was a huge rager. When games started to go downhill, that was it for flamie. He would tilt and bring the rest of the team down with him. He was a very good player, but that kind of behavior could not persist. Fortunately, Na’Vi had a calm, collected, intelligent, ex-player around. starix, though officially the coach, became the personal assistant for flamie. starix’s role was to make sure that neither flamie nor the team would be tilted by the actions of either side. It was not until the fall of 2015 that starix had taken over the strat calling role. After starix integrated flamie and took up the tactical duties, Zeus’ utility largely disappeared. He was really only a cheerleader with weak fragging abilities. He was much like many coaches (ex-players who just bring water to the players) except he was playing the game. Thus, he appeared to be an obvious choice for replacement.

There are a few complications of removing Zeus for s1mple, but I believe that Na’Vi will be able to overcome them and that the added fragging potency will outweigh what Zeus brought to the team. One such problem is that starix may be too busy managing s1mple to call strats to the level that we expect of him. That is certainly a well-founded concern, but if Gabriel “Fallen” Toledo can be playing the game at a Major winning level while executing and adapting to tactics, then starix should not have a problem with fulfilling two tasks himself. Except, one of those tasks will be quelling the worst attitude in Counter-Strike. Nevertheless, playing the game at a high level takes a lot of mental power as well, which leads me to surmise that starix will be able to see to both duties.

There is a reason why Zeus is one of the most popular CS players. He is a social and uplifting person, even if he does rage sometimes. In a team full of ragers, Zeus’ personality probably prevented the team from getting too dejected and embroiled in conflict, if not in-game then certainly outside of it. The lack of a positive hype man figure on Na’Vi is a concern. Starix is a quiet person, and “Edward” Sukhariev, Denis “seized” Kostin, and flamie all have a tendency to get angry. This leads me to believe that Na’Vi will be quite inept at getting out of a rut if one should befall them, and with the great possibility of things not working out right away, that brings the team ever being able to succeed into question.

There is no way of getting around this problem. No one on that team is going to magically turn into a happy person. It is also impossible to refute that people travelling, working, and competing on a team together do not have to get along. They do; it is a simple fact. Not everything has to be roses, but cordiality is often a way for a group to maintain a productive relationship.

It is a rule that working relationships are based upon discovered similarities and such a relationship becomes amicable. There are, as with all rules, exceptions. This Na’Vi lineup may be able to play as a team without something clicking on the friendship level. After all, this team is a collection of exceptional players. Some teams are fueled by adversarial conflict within the team, like the Lakers with a rivalry between Shaquille O’Neal and Kobe Bryant. That rivalry brought the worst out of each player in terms of their personalities, but it also brought out the best of their play. They won three NBA titles in a row and made it to four finals in total. After 2004, when they went their own separate ways, neither Shaq nor Kobe were as successful. It turned out that their inner-rivalry helped to achieve a meaningful result, and it set a precedent that may mean that s1mple’s horrible attitude towards his teammates could actually be productive on certain teams.

There is also the possibility of s1mple not having an attitude problem on Na’Vi. s1mple has never had the chance to play on a good team. He played on FlipSid3, which had good tactics and no skills, and on HellRaisers, which was all aim but no brain. Playing for Team Liquid was not a good fit for s1mple either. He had problems with the skill and behavior of certain players, not to mention the strain of being away from home. s1mple, despite handling his problems in inappropriate ways, may have less to be upset about on Na’Vi, so he will, in turn, rage less. There is also an element of respect. Starix and Edward are Ukrainian Counter-Strike legends, and it is every Ukrainian gamer’s dream to work with these veterans. s1mple can be foolish, but no one would be so ignorant to mess up a chance like this: his best and only remaining chance to be a superstar and Major winner.