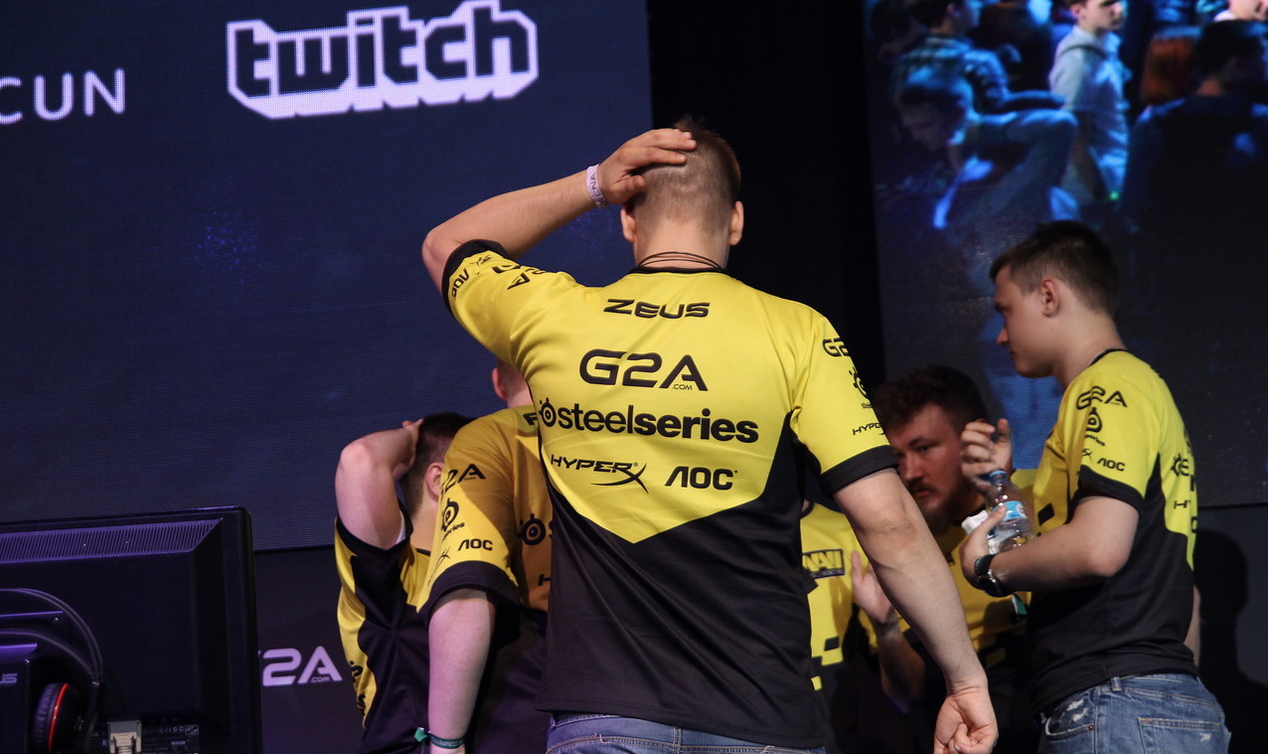 On May 22, 2016, Na`Vi lost the grand finals of the StarLadder i-League Invitational to Polish rivals Virtus.Pro. It was a surprising upset, as Virtus.Pro has been struggling all year long to just retain their status as a top ten team in the world. It was a constant struggle for Virtus.Pro as they kept swapping roles and leaders between players like Wiktor “TaZ” Wojtas, Filip “Neo” Kubski and Janusz “Snax” Pogorzelski to try to find a semblance of their success from 2015. None of it worked and while Virtus.Pro could still play close games against the better teams, they were stuck trying to scrape by tournament after tournament.

So when Na`Vi met Virtus.Pro in the finals, it seemed to be a foregone conclusion. While the two teams had always played close sets, this was the farthest disparity in skill and results in Counter-Strike: Global Offensive. Virtus.Pro was constantly struggling and failing to survive past the round of eight in big tournaments. Na`Vi had made made their name as the second best team in 2016 after Fnatic and later Luminosity. While Virtus.Pro was getting knocked out after reaching the playoffs, Na`Vi was playing in finals.

Yet when the games started, the years seemed to roll back for Virtus.Pro. Snax came roaring back in full force, Jarosław “pasha” Jarząbkowski and Paweł “byali” Bieliński;s play was revitalized and both Taz and Neo continued to contribute in meaningful and impactful ways to help close the game. Where Virtus.Pro rose to the occassion, Na`Vi fell to it. They could not play their game; Ladislav “GuardiaN” Kovács went missing and they just could not stay composed. The finals ended with Na`Vi winning the pistol on T-side of cobble, but they were unable to close it out despite being a great T-sided team on a T-favored map.

For Na`Vi, it was not just the failure in this finals, but a continual pattern they have faced throughout the end of 2015 through 2016. From the last Major of 2015 to now, Na`Vi have been in nine grand finals:

In those nine finals, they have won three: IEM San Jose against TSM (later Astralis), Counter Pit League against Astralis and DreamHack Leipzig against Luminosity. They were favored to win all three finals and did so.

And then there are the other six. They lost the Cluj-Napoca as underdogs to EnVyUs. They were even against Fnatic both times they met at ESL ESEA PL and StarLadder, but lost both times. The first was a very close set that could have swung in Na`Vi’s victory, but the second was a complete stomp. At the MLG Columbus Major, they were close to or better than Luminosity but lost their second Major in a row. This was different from the others as we later found out that Guardian had injuries and was forced to play with four times the sensitivity on his mouse.

Then there are the last two finals where they were the clear favorites; at DreamHack Malmo against NiP and StarLadder i-League Invitational against Virtus.Pro. They were favored to win both of these finals against their opponents, but failed to succeed at the crucial step.

There is a clear pattern of an inability to win finals. Na`Vi is an amazing team and easily one of the best teams in the world and the team all other teams hate to play against the most. Man for man they have some of the best players in the world. They have a great tactical style and can win both T and CT sides and they have a large map pool to play from, yet they lack something. The special winning element that made teams like NiP and Fnatic the best in the world, or some special quality of mental strength that let Luminosity rise to the top.

Yet Na`Vi’s story is not unique in CS:GO or eSports. Astralis were notorious chokers for all of 2014. They overcame it briefly in 2015 before reverting back in 2016. VeryGames got a slew of seconds as they tried to overtake one of the greatest lineups of CS:GO’s history in NiP. Yet the most comparable analogy to the Na`Vi situation we are in now is Hong “YellOw” Jin-Ho, Brood War’s first great Zerg player.

Yellow getting kissed by his archnemesis, Lim “Boxer” Yo Hwan

Yellow was initially given the nickname Kong, which means bean in Korean as it was a dig at his short stature. The term was eventually overtaken to mean perpetual second place runner-up. This occurred during the prime of his career, which spanned from 2001-2004. In Brood War, there were two major individual leagues in the OSL and MSL as well as WCG. He reached six finals and lost all six. It never mattered how good he was playing, who he was playing against or whether he was the favorite or the underdog. Nothing he could do seemed to work. He could play and beat any player in the world, he could even win special mini events. But, when it came to the big one, or when it came to the OSL or MSL or WCG, Yellow lost. Once he stepped onto that finals stage, Yellow would inevitably lose no matter if he was the favorite or the underdog. Because of this, the word Kong came to mean the second best in the world and the sons of the Kong were those players who continued his legacy of constantly getting second place.

The players of Na`Vi now find themselves in a similar situation to Yellow’s own. While it is not quite as dire as Na`Vi actually won some big events, the overall arc of their career runs similarly to Yellow’s history. There is some psychological factor that held Yellow back from ever winning no matter how good he was. Some weakness of mental fortitude that cannot be overcome.

Danylo “Zeus” Teslenko put it most aptly, “It’s a huge mental barrier, like Astralis had. Somewhere in the back of your head you think ‘it would be embarrassing to lose once again.’”

The situation Na`Vi are in now is one of the hardest to resolve. No amount of practice and hard work can get you over that hump. In fact, their drive and ambition may be the thing that is killing Na`Vi in these finals. It is a cruel kind of paradox. The best players in the world practice every day because they want to win. They decided that for them, the one thing they want to do in their lives is to prove they are the best at this single game. That drive and ambition is what keeps them going day in and day out despite the amount of hardships or failures they face. It is also what can stop you at the very last second. When you get so close to what you have been dreaming about, to what you have been striving to accomplish for years, the unnecessary thoughts of “We are going to win” or “What if we lose again?” drive you to distraction. That single moment of a lack of focus, or the inability to stay composed can mean the difference between victory and defeat. That ambition which has burned inside you and drove you forward all of those years is now a poison that leaks into your mind at the most critical moment in the finals when you bet everything you have for the one victory that will vindicate everything you have done so far.

It is one thing to improve your tactics, your aim or your teamplay. Those are tangible things, but the mindset? There is no easy solution. Yet there was a player who was faced with these conditions and eventually broke through. That was Song “Stork” Byung Goo, another Kong from Brood War who had two OSLs and one MSL before finally achieving victory. Though the circumstances of that victory are suspect (He won against another Kong in Jung “FanTaSy” Myung Hoon), it was still a landmark moment for Stork. He credited the victory to his change of mindset, a change that occurred months earlier from a previous OSL Finals in Park “July” Sung Joon vs Do “BeSt” Jae Wook.

In that finals, July made a miracle run to the finals where he was a huge underdog. He was two years past his prime against a young star that was hailed as one of the world’s strongest PvZs. That did not matter to July as he shocked the world and mentally crushed Best in the Bacchus OSL Finals. In that post finals interview, July said that in Finals, skill did not matter, only mental strength. This key aspect was what Stork took away when he eventually came to win his first and only OSL, “…the biggest inspiration came from last OSL with July. When I saw July play, I was so jealous. How can someone make his opponents tremble in fear like that? How can someone who isn’t at his prime like he used to be so good at mindgames?”

The biggest weakness Na`Vi lack is the mental game. The answer is both simple and complex. Gabriel “FalleN” Toledo already gave his opinion to Zeus about how to win, “Well, time to stop thinking you guys are supposed to win every final. There is no shame in losing. Relax and you will win..”

While the opinion itself is correct, the reality is that the hardest thing to change is a person’s mental aspect. Astralis continue to have problems in the clutch and have now changed rosters with the hopes that Markus Kjaerbye will be the fifth gear that will bring them over the line. Oleksandr “s1mple” Kostyliev, for all of his skill, still cannot get his teammates to see eye-to-eye with him and stay on a top team. Stork, despite having this revelation, went on to have three more second place finishes. The hardest aspect of being a player is changing yourself, whether it be your play style or your mental character.

Yet Na`Vi must do this; this is the last battle. If Na`Vi can change this, and if Na`Vi can break through, they can become the best team in the world. As a team, Na`Vi are strong enough that they can beat anyone, anywhere at any time except the finals. For Na`Vi, there is one battle left. They must continue to make finals, continue to put themselves in a place where their greatest shame and worst memories lie in order to challenge themselves again and again until either they win or they break. This is the last hurdle. If they fail here, they will forever be remembered as the Kongs of CS:GO for continual second place finishes. If they succeed, they can become the strongest team in the world.