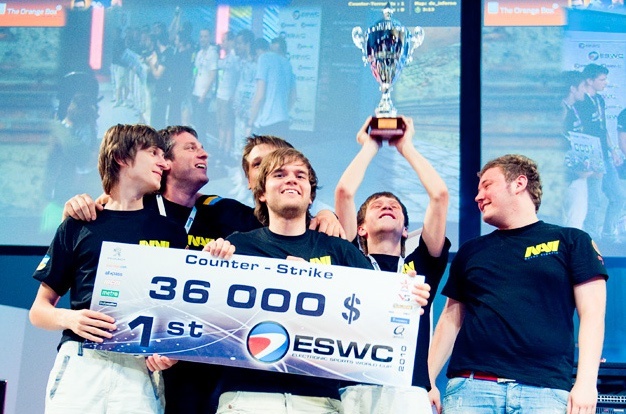 Natus Vincere is an extraordinary team. The Ukrainian powerhouse is composed of some of the greatest experts in Counter-Strike history. They play off of each other so well that champions look to them as a model. They have two of the most canny thinkers in all of Counter-Strike, but they have never won a Major. They have attended all eight Majors, made it to the finals of two of them, but they have never won a Major. And unforunately, they will not win the next one either.

First, let’s go through their history before we get to their current problems. Na’Vi was a great Counter-Strike 1.6 team. They won the most prize money of any team and dominated the latter portion of the game. The team was based around one of the best AWPers of 1.6, though you would not know it today: Yegor “markeloff” Markelov. Though markeloff has since departed, much of the lineup from 1.6 remains today with Ioann “Edward” Sukhariev, Daniil “Zeus” Teslenko, and Sergey “starix” Ischuk all being part of the team. Behind the team was Murat “Arbalet” Zhumashevich, a wealthy Kazakh businessman who provided funding for Na’Vi and the Arbalet Cups. He said to starix “build me the best CIS team”, and he did. Na’Vi obviously had a lot in 1.6, so naturally, they were reluctant to leave, as was ESC (now Virtus Pro).

Na’Vi got their start in CS:GO more than half a year later than Ninjas in Pyjamas, the best team in early CS:GO. As a result of their hesitation, they were very far behind in learning about CS:GO. Players coming from 1.6 were left dumbfounded when using grenades. These veterans were so accustomed to 1.6 mechanics that noobs could throw nades better. Utility was obviously not the only thing that was difficult to learn, as players making the transition had roadblocks in many areas.

Since NiP were the first to commit themselves to CS:GO, they were the trailblazers for this new game, and as they were progressing by leaps and bounds, Na’Vi was stuck learning how to smoke off Long A on Dust II. Na’Vi’s first year in CS:GO was just a mess of terrible results with the exception of local LANs. At the StarLadder events in their home country of Ukraine, they made it out of group play everytime, and they even made it to the finals once. Of course, when it came time for DreamHack Winter 2013, the first Major, they were poorly prepared for the top tier opposition they would encounter. After that tournament, they were sent back to the status that they were assigned before their breakout in the latter years of 1.6, the scrub team from Ukraine.

The next Major was EMS One Katowice. It was a massive run for the Poles where they stole the title from NiP, and Na’Vi was again nowhere near the final. They had a repeat performance from last Major, and fans were left doubting the possibility that these players would ever have legendary status in CS:GO.

After Katowice, Na’Vi got their act together. They won their first international tournament in CS:GO in the form of StarLadder Starseries IX. According to lurppis’ HLTV blog at the time “Na’Vi can beat any team.” With statements like that being circulated, some people thought that Na’Vi could win ESL One Cologne 2014. They did not win, but they did much better than the last two Majors. They made it out of the groups where they had to face Fnatic. Although they were not the Fnatic of late or of DreamHack Winter 2013, Fnatic went on to the finals where they lost to NiP. Na’Vi was certainly improving, but at this Major, they could not beat every team as promised.

By DreamHack Winter 2014, Na’Vi had shown improvement over the past year. At that point, they were among the top teams, getting high placings in tournaments outside of their home, such as fourth place at ESWC. After having a dominating performance against Dignitas in the quarterfinals, they faced off against LDLC, the epic French lineup, where they lost. LDLC went on to win the entire tournament and would later beat Na’Vi in many important matches.

ESL One Katowice 2015 was the next LAN, and Na’Vi only made it to the quarterfinals. They came out second in their group and had to face Team EnVyUs, where they lost to them again as they did at the previous Major. Na’Vi could not have helped coming out in second in their group because they were placed with a godmode Fnatic. Between DreamHack and Katowice, Na’Vi had no good results. It was somewhat understandable because there was a one to two month offseason, but it was unacceptable for them to fail to qualify to MLG Aspen and ESEA Season 18 Global Finals. Some people within Na’Vi found their performance to be unacceptable as well and decided to do something about it.

Starix had stepped down from playing and moved onto coaching the team. This was clearly a good move, since he was struggling to frag and has since done very well in the coaching role. Starix’s retirement marked the first in-game leader coach, something that is becoming more and more prevalent. In place of starix, Na’Vi recruited flamie who had just left being a stand-in for HellRaisers the week before. This move from flamie before the actual roster change on Na’Vi happened indicates that the Major was probably not the tipping point as fans thought at the time, but rather, it was a long time coming and that starix wanted to play one last Major.

There were also some other roster changes before this one. Zeus has always been playing on Na’Vi in CS:GO, and starix has never left the organization either. Edward and markeloff left the team in July of 2013 to go to Astana Dragons, a team filled with CIS talent. Anton “kibaken” Kolesnikov and Denis “seized” Kostin joined the team after they had left. Edward came back in later that year, and markeloff left Astana Dragons soon after to join HellRaisers. When Edward joined Na’Vi again, Ladislav “GuardiaN” Kovács came into the team as well. Arseny “ceh9” Trynozhenko, a support player from the 1.6 lineup and now a streamer with Na’Vi, and kibaken were taken out of the team to make way for Edward and GuardiaN.

Na’Vi has obviously made many roster changes, and unlike teams such as NiP who kept failing lineups and players for far too long, they are driven to succeed. NiP used to be the best in CS:GO, but teams like Na’Vi were able to catch up due to their ambition. The improvements of Na’Vi over the years are the manifestation of their sacrifices and ambition.

After adding flamie to the team, there were some very visible problems. Flamie was a skillful player and rager, and these attributes were amplified when together. It was noted by commentators that starix was needed as the manager of flamie. After Na’Vi was solidified, they started doing better than ever. They made it to finals and won some tournaments. When it came time to play EnVyUs, now firmly a rival, Na’Vi failed once again. EnVyUs had better players and a better map pool than Na’Vi, and EnVyUs also had the new reinvigorated lineup featuring KennyS and apex. Just when Na’Vi thought they had conquered their demons by winning StarLadder Starseries XIII against EnVyUs, EnVyUs changed up their lineup and took Na’Vi out of the Major.

Before DreamHack Cluj-Napoca, Na’Vi had some pretty good results, very consistent performances, but they brought home no titles. This time, however, they made it to the finals, and it was no easy task. Na’Vi had to face off against a god mode NiP and an ever improving Luminosity team. In their group was EnVyUs, and they had to battle out for second place of the group against Counter Logic Gaming, a surprisingly close match.

As fortune had it, Na’Vi had to face EnVyUs again, and this time, they were in the way of the of their first Major title for CS:GO. After a battle in the groups, EnVyUs and Na’Vi had found themselves in the final. However, Na’Vi was not ready to take down their rivals that day. They would have to wait for another chance at a Major win.

Na’Vi did not yet lose the determination that got them to the position it did in 1.6 and CS:GO. After Cluj-Napoca, Na’Vi was back at it again with impressive tournament wins and playoff placings, with the exception of CEVO Season 8 Professional Finals. EnVyUs had been dismantled again with Kioshima getting kicked and the no-namer, Devil, getting brought in. Na’Vi was beating Fnatic when no one else could. Na’Vi was also able to beat the new and improved Luminosity, a team making it to a bunch of finals.

When it came time for the highly anticipated MLG Major, Na’Vi, Luminosity, and Fnatic were favorites. Fans of these teams were able to rightly justify why their team would take the trophy home. Fnatic had six titles in a row (a record), Luminosity was getting close to taking their first title, and Na’Vi was also looking good.

At this tournament, things did not go according to plan as they have at every tournament. Olofmeister’s wrist died out and so did GuardiaN’s later on. Two NA teams made it to the playoffs of a Major, something that had never happened since EMS One Cologne 2014. Na’Vi had made it to the final with no problems, and Luminosity was dishing out impressive performances too. Coldzera of Luminosity played so well against Liquid that he now has his own graffiti. It was shaping up to be one of the best finals ever.

Unfortunately for Na’Vi, it was not going to be great. GuardiaN’s wrist problems kicked in, and he had to play on a much higher sensitivity because his wrist hurt so much. Without GuardiaN playing up to his standards, the rest of the team was able to play quite well on Mirage. After Mirage and realizing their fate, they lost to Luminosity 16-2. Better luck next time, right?

Wrong; Na’Vi cannot win this upcoming Major. They have not played to the level that they did before the MLG Major, and teams around them have improved. There is Luminosity, now known as SK, that is still strong as ever. G2 is constantly getting better and was able to take a win off of Luminosity at ECS. Olofmeister might get back to form with some more practice. NiP is getting better since the addition of THREAT as coach, and Na’Vi is stuck in a group with them.

If Na’Vi were to win this, it would be a miracle, like Fnatic’s Major win at DreamHack 2013, but even Fnatic would tell you not to count on miracles. Na’Vi is a great team with a great history of winning Majors but not in CS:GO. After they learned the game and caught up with the other teams, they had good placings at the Majors, but they never won any of them like their history in CS 1.6 promised.

Maybe, a roster change is necessary, a shift in the meta might help, or starix could introduce a new mindset into the team. Those are just fantasies. In reality, Na’Vi has been a “Major” failure in CS:GO, and today is not the day it will change.