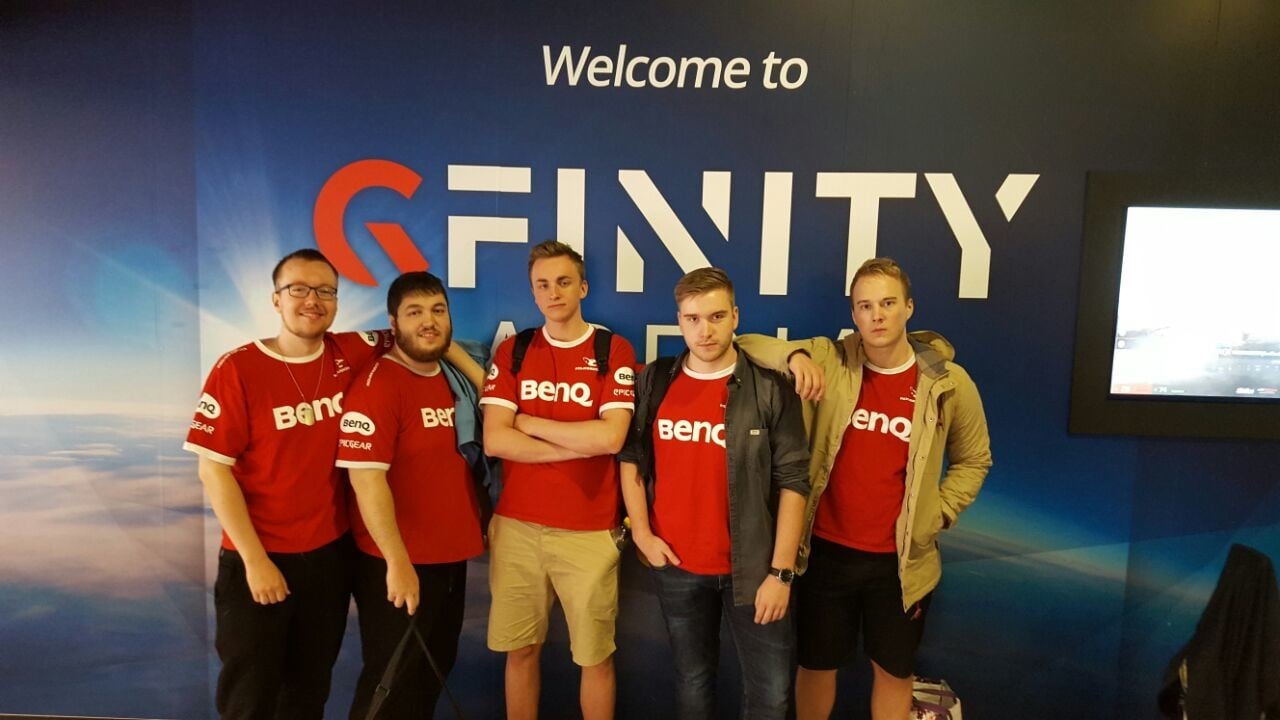 With just a short period of time left until the next CS:GO major, ESL One Cologne 2015, kicks off there is one team that has to be considered in particular. There have been a variety of teams that were declared as the big German hope in CS:GO but actually none of those teams were able to fulfill the expectations of Germany. This should change now with the German line-up from Mousesports, which is the only domestic representative on the second major tournament taking place in Cologne, Germany. Even though Mousesports only got the spot as “Legend”, because they bought in three players of this PENTA line-up,  that reached the playoffs in Katowice, they are certainly a team that can compete on a high level and upset the very best teams in the world.

After several roster changes in the past Mousesports now seem to have found a line-up, in which every player is able to speak German and that is capable of competing internationally.

The in-game leader of Mouz and 1.6 legend gob b has benefited very much from the mentioned change to a full German line-up since he now can exploit his full potential in terms of calling. It may not be the only reason, but it has certainly an impact on why Mousesports now looks so strong compared to their previous roster, where he had to call in English because of Nikola “NiKo” Kovac. For many people Dayik’s tactical mastermind makes him one of the best In-game leaders in CS:GO. His ability to counter his opponent’s tactical approaches is truly fascinating. But admittedly, he also has his weaknesses when it comes to fragging. Gob b is not the same type of in-game leader as Happy, who often tops the scoreboard, but on the other hand Happy is inferior to gob b in terms of tactics. In general Mouz and EnVy are not comparable to each other, because Happy relies much more on individual skill than set strategies and gob b is sort of the complete opposite. Also remarkable is that gob b has boosted the rest of his team due to his experience and leadership which is very good, since some of his teammates are fairly young and don´t have that much of experience, at least nowhere near as much as gob b himself.

ChrisJ is part of Mousesports since October 2013 and thus special. Although a lot of players joined Mousesports and also left the organisation, the dutch AWPer still wears the Mousesports jersey after almost 2 years. Besides this little fact, his AWPing skills are excellent. He may not be the best in the world since this title still seems to belong to GuardiaN, but he definitely is a good contender for this spot. Also his rifling, especially with the M4, seems to be on point and the one particular thing he is famous for is his Scout. This man really feels comfortable with the SSG08, whereas most other snipers buy the Scout in the second round just to upgrade it to an AWP two rounds later. ChrisJ often simply sticks to it and nevertheless comes out on top against his opponents with the big green guns. So that definitely speaks in his favour, if he is so confident, that he can do significant damage with a worse weapon. Maybe the most important fact about ChrisJ is: “OnlineJ” is dead. He’s performing at LAN as well as online. Actually for a long time now, but the moment where he really convinced the scene that this nickname isn’t accurate at all, has come more recently. Another big point why Mouz is overall better than previously.

The star player of Mouz is arguably one of the best riflers in the world. Nex is one of the three young players that joined from PENTA in May 2015. Since he joined Mouz, he is getting better from tournament to tournament, showing us what he is capable of with occasionally incredible performances at Offline-Tournaments. According to his teammate Denis, Nex feels more comfortable with a real in-game leader, as he often had felt unprepared at LAN events in his time playing for PENTA, which obviously isn’t the case anymore. Now he is pretty much the best player in Germany and one of the better players in the world. He is incredibly good both with rifles and pistols. Definitely a player, whose career we should keep track of.

First of all, the reason why I do them together and not separately like the rest of the team is because of their time before this “new” Mouz line-up. They have played together for most of their career in CS:GO, seeming almost inseparable. However, they often have been criticized for their lack of fire power and in fact they are more of the supportive type of players. However, that doesn’t mean that they have to be as strong as Nex or ChrisJ, because you already have this kind of star players with them. They just have to fulfill their own roles, and of course they also have strong performances from time to time and are able to turn games in their team´s favour. Both of them certainly have talent, they are just young and have a lot to learn and improve. As mentioned before, Gob b contributes a big piece to this. Important is also the fact that Denis can take some pressure off ChrisJ. Whenever the primary AWPer of Mousesports feels like he’s not hitting his shots, Denis can take over the AWP and do a decent job with it. On CT side of de_train it seems like he’s playing primarily AWP. It’s one of the maps he seems the most confident on and also Spiidi does a very good job at holding the bombsite B. All in all they may not be the most skilled players in this roster, but they also have their qualities, which can contribute to their team’s success and they certainly deserve credit for their work at Mousesports.

Without any specific preparation Mouz took this tournament just as a practice for future offline events. Nobody really expected them to survive the group stage. However, Mousesports shocked Virtus Pro in their opening game with a 2-0 victory, followed by a 2-1 loss versus EnVyUs. In an overly thrilling match against Virtus Pro, Mouz advanced with a 22-20 win on the last map de_train and a 2-1 overall scoreline to the semifinals, where they got eliminated by Ninjas In Pyjamas with a clear 2-0 score.

The second Offline-Tourney for the new Mousesports roster brought a similar success to the Gfinity Summer Masters. They started with two convincing victories over Team Liquid and Cloud 9. Yet again Mouz lost in the semifinals, this time versus Natus Vincere 2-0.

Not much you could criticise here either. An expected win over Team Liquid, followed by a rather unexpected victory over Cloud 9, which have won over Fnatic at ESL ESEA Pro League Finals and generally were showing strong performances lately. Gob b, however, was just countering Cloud 9 completely, so that the up and coming Americans had no chance at the end of the day. In the end Mouz lost to Na’Vi which, as expected, were individually the better team.

With TSM going out in the last place, Mousesports became the favourites to win the tournament quite early. As one would expect they advanced to the final through the upper bracket, to eventually face Hellraisers. Despite having a map advantage through coming from the upper bracket, they lost the BO7 final in the end. Even though they led 3-1 at some point, Mouz started to make too many mistakes, allowing Hellraisers to catch up and take the title.

Overall it was a good tournament by Mouz if we disregard the last three maps of the final. On one side, you have to stay focused until the very end of a game, otherwise you kind of don’t deserve to win any more. But on the other side a Best-Of-7 final is exaggerated and in a BO5 for example, Mousesports would have won already. Retrospectively, again not much to say against Mouz’ performance. There were pretty good games from them, even though this event maybe wasn’t as momentous as the previous ones that Mousesports attended.

Mousesports actually had a really hard time at this tourney, considering the format. The Germans started with a 16-2 stomp over Renegades in an excellent manner but then only got pursued by bad luck. Three defeats against EnVy and one loss versus TSM. However, Mouz was the only team to win a map against the later victorious Frenchman of Team EnVy. Not even Team SoloMid managed to take a map off them, instead they never really came close to a triumph in neither of the four maps they lost. Mousesports showed more competitive spirit with their 16-11 victory on de_train though and two close games of their three losses against EnVy. Admittedly, the 16-13 on de_inferno shouldn’t have been this close since EnVy could have closed it out way earlier, but on de_cache Mouz put up a really good fight, after losing 10-5 they managed to come back on their T side only to eventually lose in Overtime.

Altogether Mouz played a good tournament even though they only placed fourth. They are certainly happy with their performance, because they played on a high level against the best teams and Mouz looked fairly strong although they lost most of their games.

This is the tournament that means a lot for Mousesports. Way back at the Gfinity event Gob b stated that their focus will be on the major. Mouz have high expectations for this one. Their goal is to get into the Top 8 and gob b wouldn’t be surprised if they make the semifinals, because of the “fan advantage” they have. Exactly this could be the crucial factor for Mouz as thousands of German fans will cheer for them in the Lanxess Arena. The only requirement to take advantage of this boost is to survive the group stage, which won’t be held in the same location.

In the group stage 1 of ESL One Mousesports have a doable task with Virtus Pro and Cloud 9. Both of these teams have been beaten by them in the past and interestingly all three teams are relatively similar to each other, for example they all feel quite comfortable on every map except de_inferno. Of course Virtus Pro is the favourite to secure a quarterfinal spot on the first day, because of the tournaments they’ve won recently and so on, but in fact every team in this group except Immunity has a good shot at advancing to the playoffs. Anyway, I don’t really expect Mousesports to qualify for the playoffs at the first day as this should be reserved for Virtus Pro. Nevertheless, Mouz should get to the quarterfinals through group stage 2 as they are surely capable of upsetting top teams such as VP or TSM and once they are in the playoffs everything is possible.

Mousesports is a team which should have a bright future. As mentioned before, there have been different teams before to be considered as the hope of Germany and by the looks of things there’s finally a team with this exact Mouz line-up that is actually according to expectations. Mouz have been improving a lot lately, both individually and as a team. There hasn’t been a single LAN event yet, in which Mousesports performed badly. They have an excellent map pool. It’s actually impossible for their opponents to bring map Vetos in Mouz’ disfavor as there’s only one map they don’t play well in, which is de_inferno. Even though they may already look like one of the better teams out there, Mousesports is certainly not in their best shape yet. Even if they fail at ESL One Cologne we can’t rule them out for the future. Plenty of other tournaments and leagues are upcoming where they can further improve and if there’s one German team that can win an international tourney in the near future then it is Mousesports.