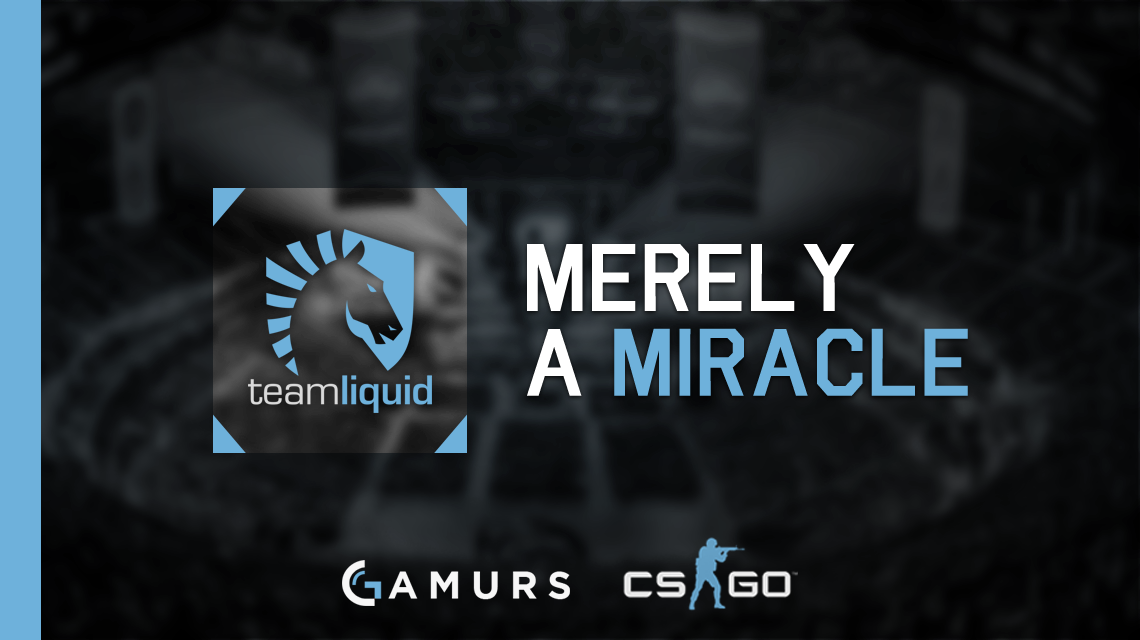 For some, the anticipation of victory is just as exciting as the moment where it is achieved. For a variety of reasons, the Team Liquid ESL One Cologne run will never happen again. The team saying that it will never play again and Oleksander “s1mple” Kostyliev’s known attitude problems should be enough proof that their performance was merely a fairy tale.

Liquid’s performance at ESL One Cologne was nothing short of a miracle. One miracle it reminds me of in particular was the Miracle on Ice, though there is also great similarity to Jesus raising Lazarus from the dead too. For those who are not familiar, the Miracle on Ice refers to the 1980 Winter Olympics hockey victory by the Americans over the politically rivaled Soviets. The reason why this was a miracle was that NHL players were unable to play on the team, so Team USA resorted to taking young, college players and putting them up against the best that the Soviet Union had to offer. Basically, like Liquid, they were a rag-tag crew going for Gold. Despite Liquid not quite taking the first Major for America in ten years, the overwhelming result is comparable nonetheless to Team USA’s 1980 victory.

At first, and only for a day or two, I wondered and hoped, “could s1mple stay?” Even before the Major, s1mple’s departure was written in stone with the signing of Jacob “Pimp” Winneche. To turn around and forget Pimp would not only be repeating a huge mistake, but it would be grossly unprofessional and costly. Team Liquid found themselves working with Eric “adreN” Hoag after they kicked him for Kenneth “Koosta” Suen. Koosta was a much better player, both in terms of his skill and the role he was needed for, but due to adreN’s performance at the MLG Major, he was kept on the team.

Like MLG, there were many circumstances that played into Liquid’s favor and allowed for them to do better than any other NA team has before. adreN was no longer in-game leading, so he could frag better. They got an even better in-game leader than adreN in Luis “Peacemaker” Tadeu. The team was able to cast off all burdens of having to play with adreN by thinking of him as just as stand-in. There was also the luck of Team Liquid happening to hit their shots and olofmeister’s wrist issue preventing him to hit any of his. Where all of this went wrong was where they thought that things had changed and that adreN could be more than a stand-in.

Have you ever been in a situation that was absolutely horrible? Well, I for one have been in situations where I feel physically sick to my stomach, depressed, anxious and horrible thoughts race through my head. The only thing that kept me going was knowing that it would all be over soon. The realization that pain is fleeting or that glory is eternal can push someone through a tough situation. For example, instead of going off to the sidelines in the big game and giving up, the truly great competitors push through that pain and win.

However, when one starts thinking that there is no way out, then they turn to destructive behaviors that prevent them from ever achieving anything. Nick “nitr0” Cannella and Jonathan “ELiGE” Jablonowski knew that this was a one-time deal with s1mple, so suddenly, things didn’t seem so bad anymore. When the long-term commitment factor is added, then things seem distant and there is no reason to push for that victory.

When that happens, there is no improvement from the team. To stay on top, a team must constantly improve because everyone else around them is. For a team to get on top, there must be extraordinary improvement. A reunited Team Liquid would be in no position to commit to large amounts of practice and preparation to topple the legendary SK. An option for past versions of the game where there were fewer online leagues, was that teams didn’t have to practice over an extended length of time; they could instead practice a lot in a short amount of time at a bootcamp.

In the case of NoA, shaGuar and method lived in North America while the rest of the team lived in Norway. Before each LAN, they would come together for a short while to prepare for the event. The problem today is that there are so many online leagues that a team must play in to qualify for the LAN. Though Liquid is skilled enough to qualify for LANs without s1mple, leagues require a certain number of games to prevent the aforementioned strategy.

There is one huge part about the long-term commitment that many people forget. s1mple got homesick the last time he was in NA and has now joined his dream team. Though I believe there were some ways that his homesickness could have been combatted, which I will briefly outline here, the fact that Liquid had failed to do so previously makes it likely that they would also fail again if they had to do it all over again with s1mple.

As a sidenote, Pimp will probably not encounter these problems, as he is a more constructively vocal person than s1mple. Gamers typically don’t get out much and have a small, but close, circle of friends. This leads many of us to have less than optimal social skills, especially so in the case of s1mple. When one relies on their family for socialization, to have that suddenly taken away is, naturally, distressing.

In the case of s1mple, he was uprooted and placed in a building with none of his teammates and a bunch of League players. Plus, s1mple comes from a foreign country, which makes it even more difficult to get out of the house, off the game, and make friends with people in real life.

All of these elements point to a greater, simpler, anomaly; they massively overperformed. They had all of the good aspects from the players and none of the bad. It isn’t likely they would do much better with preparation, which rules out long-term improvement.

Also, very few teams improve over time without roster changes. What we saw at ESL One was their best. Everyone but Hiko was playing to their highest level, and in the case of ELiGE, his play style had changed from a rather passive style into a more active one, more suiting to the team. We cannot count on that kind of performance from ELiGE all of the time, especially since the the lineup will now be different with Pimp joining.

Plus, Liquid’s best performer is gone. Though Pimp is a good player in his own right, we haven’t seen enough of his play at a high enough level to justify him being as good as s1mple. Now, Liquid will be lacking the level of mechanical skill that they relied on to get to the Major.

These kinds of performances from NA must be understood as rare overperformances. North American teams are definitely improving, and it is great that Liquid has collected even more North American talent with the acquisition of Joshua “JDM” Marzano. Due to the cultural and language overlap of Canada and the United States, the two massive countries have been able to form together in one cohesive region.

Unfortunately, because of the large geographical size of these countries and the large egos of those who inhabit the region, it has been a challenge for North America to create a formidable team. Now with Liquid’s recent success and the memory of Cloud9’s 2015 summer run, North America has hope to create multiple contending teams and live up to its potential where there was none not so long ago.