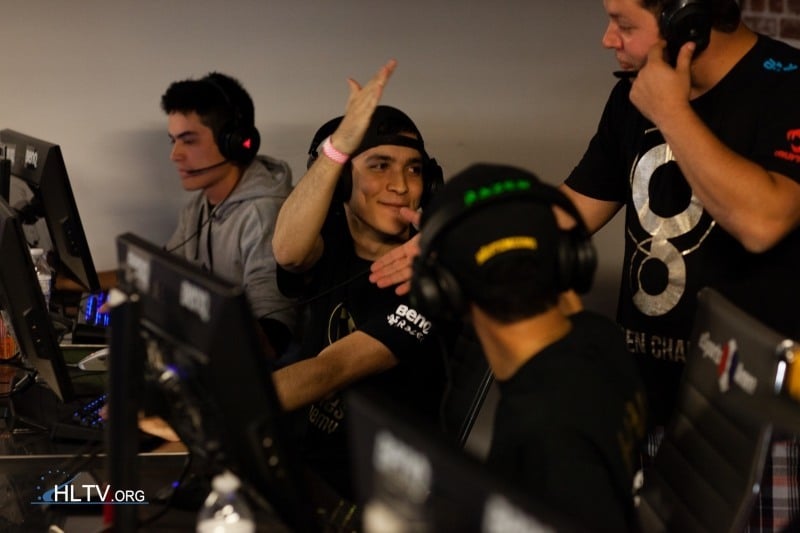 Luminosity Gaming recently underwent a significant Roster Change. They were a team that was slowly going into stagnation with respect to their results. They couldn’t move past a certain stage in the tournaments. Somewhere this was a cause for Concern. We will all agree that LG is a team that’s Brazil’s best hope in the CSGO World Scene. Their entire endeavour has always been to make Brazil Proud on the world scene.

The roster change for LG was removing Steel and Fer and adding FNX and Taco. They made an announcement on their website regarding this. However this was considered by many as being too close to Dreamhack winter. They obviously couldn’t practise at all. As Fallen said, he himself did not expect much from the team himself ( at Dreamhack winter).

However we look at the start of Dreamhack and we see LG playing versus Fnatic. They were just whitewashed 16-0 in their first match on Dust 2. It was just a confirmation for everyone that LG was just not “worth it”. Analysts and Casters started writing off LG as a has-tried.

Their next match was against EnVyUs in the losers Bracket. This match was an elimination match. 95% of the CSGO Community believed that this should be a walkover for EnVyUs.

But as you can see it was a huge upset and LG won the matchup 2-1. They got very lucky in the Draft as they got Mirage ( one of their best maps). They also got Inferno instead of Cache against EnVyUs as the final Map. In my opinion, that was a mistake on the part of EnVyUs. For the last few months, they have been playing much  more Cache than Inferno. They also have had a higher success rate for the last 1-2 months on Cache. However they wanted to surprise LG by playing on INferno as opposed to cache. That backfired as LG’s familiarity with the map really helped them. LG ended up winning the map and eliminating EnVyUs. This was definitely one of the biggest upsets on CSGL. The Odds were $17 for $1 on CSGOlounge.

Fallen and company looked very determined in their matches yesterday. Their focus and team play was really notable.

EnVyus on the other hand, were picturing a photo of Gloom. They werent motivated enough. Their facial expressions were right there for all to see. They seemed to be tilting as they lost crucial rounds and matches.

Even their Blue Hair didnt help them yesterday.

Next LG were facing NIP. NIP is the home team here. They had the entire crowd supporting them as they played their matches. NIP always has a high fanbase at Sweden.

NIP came into the match with the vetoes being Mirage, Cache and Cobblestone. Mirage is definitely LG’s best map and they proved themselves on that particular map. Cache was chosen by NIP, however they were not as dominant on that particular map as the map went to Overtime before NIP won the final thrust. The last map was Cobblestone. Till this date, NIP have not changed their veto style. As F0rest said once, they prefer to banning their opponents better maps. But that was at a time when NIP were Number 1 in the world. They had a better map pool at the time and could get away with such vetoes. However right now NIP are probably the team with the worst map pool amongst all Tier One teams. They do not have the luxury of allowing certain maps to go past them. Yet again however, we saw yesterday NIP banning INferno to play Cobblestone. Inferno is a map that NIP are always super comfortable on. Allu himself is a God on this map. Cobblestone is exactly the opposite. NIP lack the team chemistry and the co ordination required to play on this map. Their T sides have been lacklustre and they always end up going one by one on this map. They might have the aim, but Cobblestone also requires decent co ordination , strategies and team chemistry. It definitely got difficult for NIP to play with all three on a map that they have hardly played.

LG won the match easily on Cobblestone and proceeding to the Semi Finals.

LG did win two Best of three’s Yesterday. Its a feat thats not been accomplished by them a lot recently. However is it a surprise factor that helped them win? Or is it cause they are actually very good? It is rare to see NA teams win against EU teams obviously, and this might be one of the rare cases that we see NA team winning against EU so consistently.

Do we see a rise of the Luminosity Era? Or is it just a surprise factor that did the other teams in?

We will have to watch out for that during their match vs TSM today.