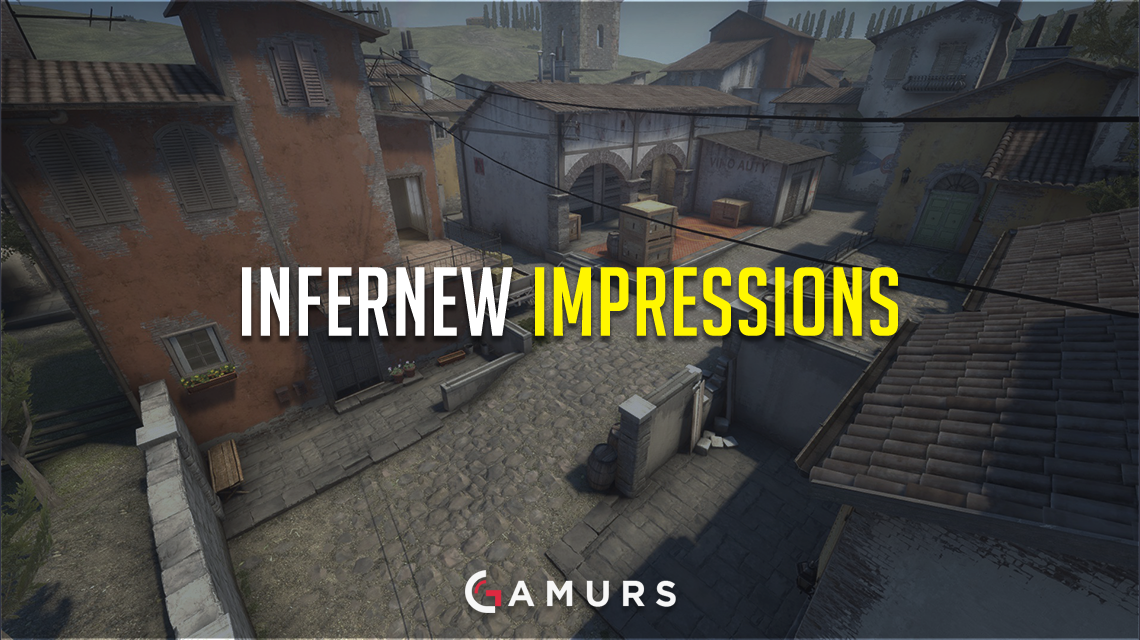 Inferno has probably been the best map in all of Counter-Strike history. Teams in 1.6 played it often, as did Source teams. When the two communities were united in Global Offensive, both groups played the map, and it was hard to find a bad Inferno team. Inferno was played in practically every series. Despite that, there were many problems with the map. However, Inferno, riddled with flaws, remains a community favorite. It’s removal, albeit a short one, caused great controversy. Now that Valve has had time to work on the map, it is time to evaluate Infernew both as a Counter-Strike player and an esports viewer.

The biggest complaint from players was Banana. In CS:GO, Banana has been much tighter and has often served to funnel attacking Terrorists into the waiting arms of the Counter-Terrorists. Also, because of how tight Banana was, smokes were extremely effective for the CT’s. Proper nade usage from the CT’s could hold off the T’s for the entire round. CT’s could choose to sit just outside of Banana or in B site where they had perfect opportunities to eliminate the approaching T’s once their utility was expended.

Players have called for a more open Banana, and that’s exactly what Valve did. When Valve had made new versions of maps for CS:GO, they were really just poor revisions to the Source version, which were bad anyways. Valve has now created a reasonable, from my limited interaction with it, update to the map using many aspects of what worked in 1.6. Banana still provides the T’s and CT’s cover, but it has eliminated many of the overpowered positions for defenders.

Banana has been one of the places on Inferno where odd and asymmetric forms, like Car, have been removed. Crates may not be as pleasing to look at, but they certainly make peeking players more visible, which is how it should be. No one was asking to make this a T-sided map, but for B Site to have only one viable entrance for Terrorists, and it not being particularly viable at that, was a problem. Maybe, a second entrance but underground would have been better than widening Banana, but it is better for Valve to be doing things conservatively rather than making drastic changes, as seen with their balancing of guns in the past. We’ll leave those outside-of-the-box changes for 3kliksphilip to explore.

The second most noticeable change was with the B Site. B used to be a mess of objects, which made it hard for attacking players, whether on a retake or initial attack, to find the defenders. One can’t fault a player for failing to notice the sniper in Newbox, especially if some weird looking fountain is blocking their view. Now that Newbox has the small crack closed off and Fountain takes up less space, we should be expecting more successful retakes. Once the bomb was planted on B Site in the old Inferno, there was no defusing it. This problem was quite similar to the lack of access to the reactor on B Site of Nuke, where players previously had to go from the catwalk to plant the bomb instead of having direct access, which was extensively complained about.

Though I have only looked around the map, I expect B Site to become a more viable option with the changes to cover on the site and surrounding area. The small space between Newbox and the pillar has been closed, but it is still possible to boost above it, which can make it very difficult to find players sometimes.

A Site has been revamped too. It is now possible to smoke the site where it previously had an overhang that required players to expose themselves if they were to smoke it. The skybox limits what can be done to some extent, but the outer edges of the site can be smoked. Again, like other parts of the map, A Site has better defined cover, making it less visually appealing but also reducing some of the randomness in CS:GO.

Around the A Site, we see that the truck in Pit has been removed and there is a cart in its place. The opening in Pit next to Graveyard, as well as Graveyard itself, has seen a removal of unusual objects and clutter. The circular base to the pillar has been replaced with a short wall, which means there will be better defined battles rather than circling around the base of the pillar to avoid combat. The reduction of fencing and cover in Graveyard will make players less concealed, which will probably lead to it being a less viable place to be in a clutch situation.

Now that Dark is gone, we should expect to see less JW-level nonsense from CT’s and more A takes out of Apartments. Like A Site, Alley has seen an opening of the roof, and this allows smokes to go out, but due to the height of the buildings and the skybox, it cannot be smoked from Alt Mid. In Alt Mid, there is no more railing on the bridge, and the shed has been removed. Mexico has been returned to the way that it was in 1.6, which allows people to walk on the Alt Mid side, but they’re forced to crouch-walk on the other half.

T Spawn has two entrances now. This allows T’s to get to A faster than before. In Mid, the barrels for T’s to hide behind have been removed. The cart of hay has been removed and replaced with steps. This change makes it easier for T’s to get into Apartments because the steps come from Mid and the jumps are easier to make.

The overall effect of these changes is a reduction in unfair positions, like Newbox or Pit. The days are gone where a barely visible opponent can kill an exposed one. Of course, a person can still take very tight angles, but that rewards higher skilled players, hence why it is a fair aspect and why Newbox is not. Generally, CS:GO is not supposed to be a game in which whoever can distinguish character models the best wins the game. Obviously, smokes obscure vision, but that’s the right way to go about providing cover. The removal of clutter on Inferno helps players see their enemies better. Though I am not color blind, I imagine that this would help people with that condition as well, which has been complained about in the past on maps like Train where colors play a crucial role.

It is my preliminary assessment that Inferno is going to be open to much faster paced gameplay. Teams still have the choice of going slowly on Terrorist side, but the changes to Banana and Dark will reduce the amount of time it takes to clear and move to positions. There is no telling how this will affect teams. CT sided teams may be worse on the map because it’s harder to hold sites, or maybe, they will do better because it’s easier to retake. Slow teams, like the old Na’Vi, were very good on Inferno, and if they were still around, there would be no telling how they would adapt to the new changes. Would the faster paths mean draining the clock even further, therefore leading to even greater dominance on the map? Would CT’s be better at attacking slow moving teams, thereby forcing them to play faster? There is no way of knowing.

Inferno is still in the beta, even if the CS:GO development team is faster at making changes. We’ll have to wait and see professional games before we can truly judge the updated map, but it looks promising.

What are your initial impressions of the new Inferno? Let us know by commenting below or tweeting us @GAMURScom.