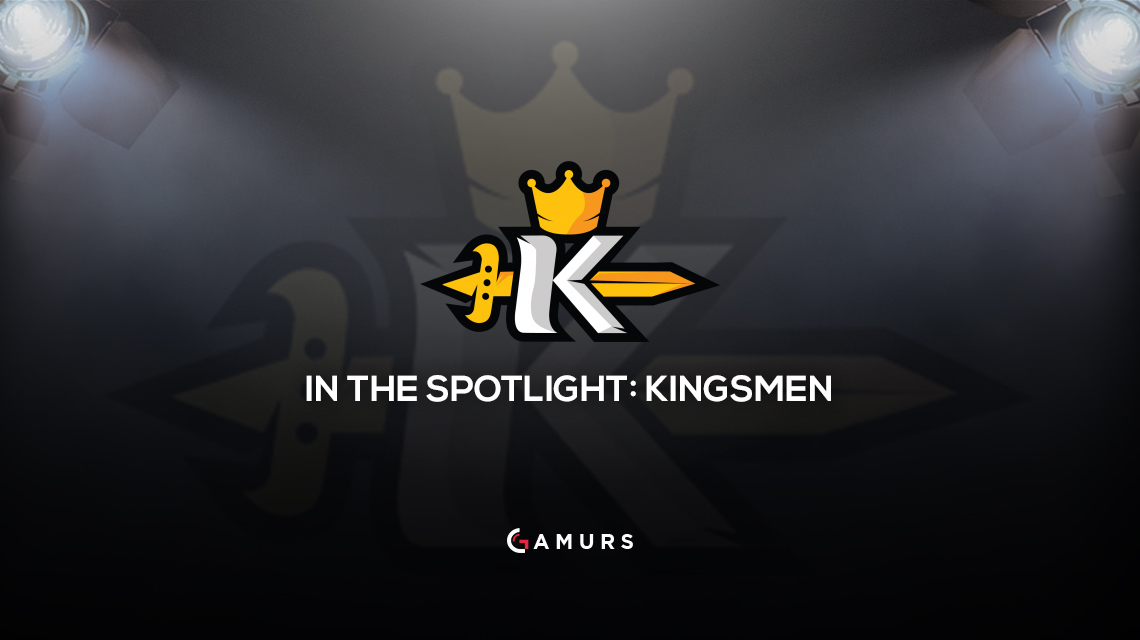 Esports websites are filled to the brim with news about big, professional teams that everyone is already familiar with. What about the smaller guys in the game? Who talks about them? I realized that everyone deserved a chance in the spotlight, so I decided to create a series where I’ll interview a small team each week, based on your feedback. Let me know your thoughts on this format or if you have any suggestions for future featured teams in the comments below.

If you have been keeping up with my articles, you’ll remember that last week I talked about a new team called Kingsmen, who qualified for ESEA’s Mountain Dew League. For my first article in this series, I asked each of the Kingsmen players, as well as their founder and COO, Hunter Specht, to give me a few words detailing their esports career. Right from the start, I could tell that these young players have a crazy amount of talent that even some current pros would be jealous of, just judging from their achievements and experiences at such a young age.

We start with the 24-year-old phenom and leader extraordinaire, Ben “r0m” Smith. Sitting high with 10 years of competitive experience in Counter-Strike, Smith is well on his way to attaining veteran status among his peers. Despite his current competitive status, his early 1.6 days were spent playing mods on servers, given that the game’s competitive side was on its last legs at that point, as it was well known that the game was dying out.

When CS:GO came out, Smith jumped right into the competitive scene by playing on a team called VexstaR. There, utilizing his years of experience and eye for talent, he perused public demos and game stats in an effort to discover unknown, but emerging, prodigies. Through this, he came across compLexity Gaming’s Rory “dephh” Jackson, amongst a few others. Together, they rose to the top, beat multiple top-seeded teams, and managed to get to the ESL UK Premiership LAN Final.

Later on, Smith and Jackson moved to CAZ eSports, where they played with Jake “jakem” McCausland, who still plays for CAZ, James “Kryptix” Affleck who is currently without a team, and Jamie “keita” Hall, who used to play for Reason Gaming, but now plays for the small British team, fish123. With the backing of that promising roster, Smith managed to make it to both Insomnia 53 and Insomnia 56. His goal for the future is to have his current roster of unknown prodigies rise up and defeat well-known teams, much like he did in the past, turning the game on it’s head.

Ralfs “high life” Abols is a versatile 19-year-old support/AWPer/entry for Kingsmen. Prior to this season, the only other team Abols has applied his skills to was last season’s roster of Kingsmen, which was a different beast entirely with ex-CAZ player Jesper “Jesp” Johansson and an upcoming Estonian star Robin “ropz” Kool playing with them. After these two left, the core three players of the team stayed together and decided to pick up Owen “smooya” Butterfield and Smith, which turned out to be very good choices for the team.

When asked about the reason behind this commendation, Abols said, “Ben is very experienced both as an IGL and as a player. He has played and lead numerous teams to victory and has played 2 seasons of ESEA Premier meaning he knows what to do in every situation and round. Owen is a very talented, decisive AWPer who knows what needs to be done in order to open up the round for us to win. Owen has both the raw skill and confidence to put himself in positions to get crucial entry picks for us.”

Abols hopes to make it to the ESEA Premier playoffs and eventually to play at the Mountain Dew Global Challenge LAN.

Then we have Emre “TARZiiQ” Gurel, who is the 23-year-old entry fragger/lurker for Kingsmen. Although his history isn’t as extensive or rich as his teammates or peers, he has high hopes for his future. The aspect he likes most about Kingsmen is that every player is really good individually and aim based. Gurel’s goal is to be amongst the best players in his country and help his team as much as possible in their journey to inevitable success. He is very confident in his ability, yet acknowledges that he lacks the experience.

Owen “smooya” Butterfield is the youngest of the squad, being only 17-years-old. He is the AWPer for Kingsmen, and to make him even more amazing, he has only been playing CS:GO since Jan. 2, 2015. It doesn’t end here though, as despite being so young, Butterfield has already had the privilege of not only playing for CAZ eSports and Cex Gaming, but also attending a total of six LANs, with top-five finishes at an insane five out of six events. The LAN where he did not finish in the top-five was the iBUYPOWER Masters tournament, where he played as a stand-in for Flipsid3 Tactics’ Denis “electronic” Sharipov, but performed poorly and finished in the top-eight.

Even though the team came in eighth, can you imagine playing for such a well-known team as Flipsid3 at only 17? Most 17-year-old gamers can only dream of having such a chance. On top of all the extraordinary achievements I’ve talked about so far, Owen has also had the highest RWS in the EU part of ESEA over four times in the past six months. Keep in mind that top EU players like kennyS play in the same ladder as him.

His goals are to advance from the ESEA Premier division to the ESEA Professional division, as well as to try and qualify for a major or a minor within the next two years. Butterfield is one player you will want to keep your eyes on, as despite all these accomplishments, he has not yet hit his prime.

Akam “Pishila” Sirwan is perhaps the newest talent of Kingsmen when it comes to competitive CS:GO. Despite this, he has a long history with the CS scene, spanning back almost nine years. He got into CS:GO two years ago when his friends started playing, and right from the start, he was determined to make it big. Whenever he is in tight situations, he relies on his game sense most of all. Despite being so new to the competitive scene, Sirwan is currently the number one Rank S player in EU, ranking above people like NBK and kennyS.

Now that you’ve seen what makes these guys tick and what competition means to them, I asked the Kingsmen COO, Hunter Specht, what made this roster so special.

“We picked up this roster because we saw major potential within the players,” Specht said. “They have all shown that they can compete with some of the best teams across Europe. We plan to stick with this team all the way to the top. We see these guys as some of the best young talents in all of Europe, and want to give them the opportunity to succeed under a brand that truly cares about them.”

All in all, the Kingsmen roster is looking strong for the upcoming ESEA Mountain Dew League. With players spanning across all ages in the spectrum, as well as varying amounts of talent and experience, these young stars are sure to make it big in the near future.

Do they have the potential to make it to the top of the mountain? Only time will tell, but they certainly have all the tools and the drive to give it a fighting chance. For more on the Kingsmen, you can check them out here.