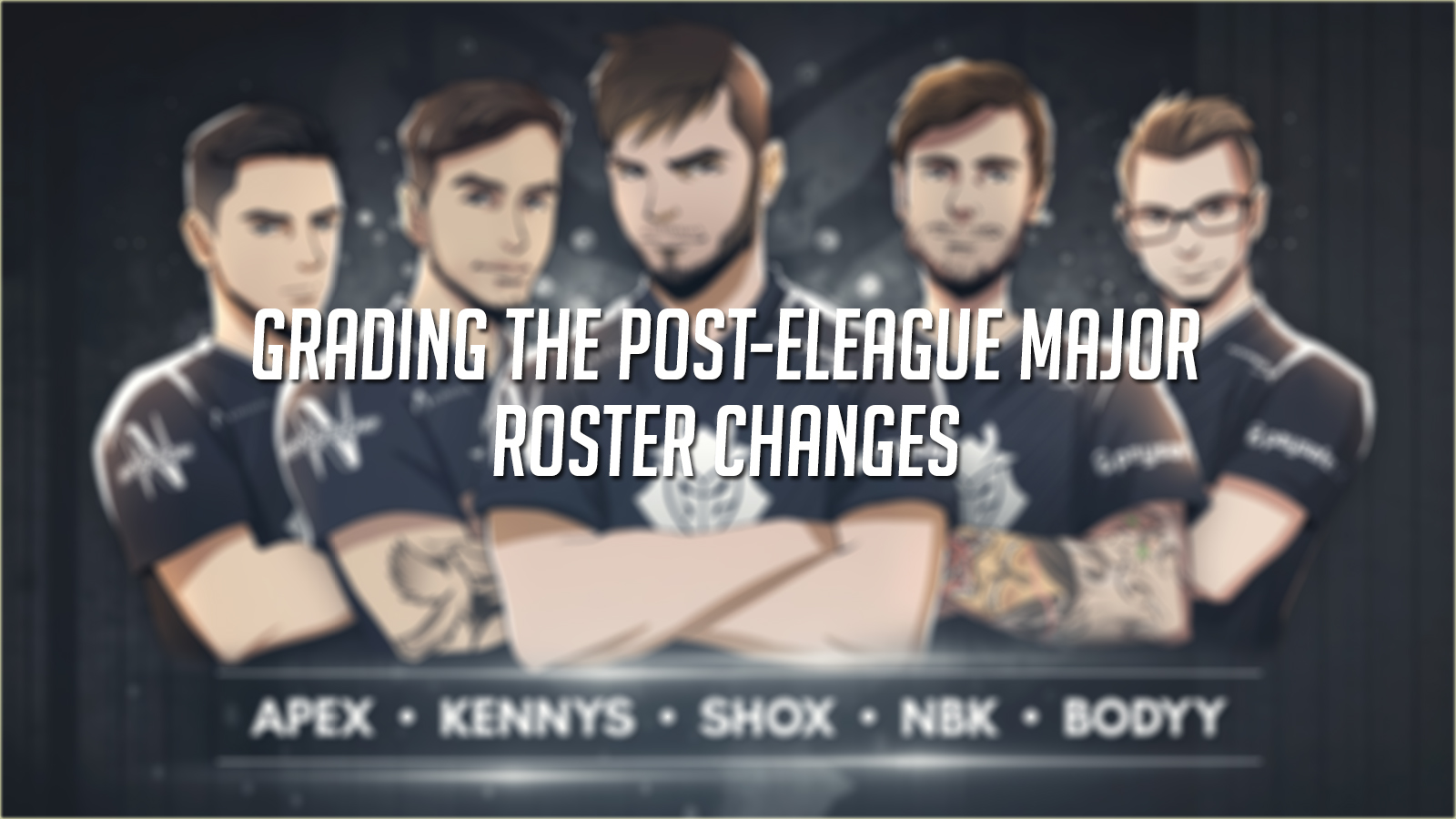 Following the conclusion of the ELEAGUE Major, several teams decided to adjust their rosters to improve their results at future tournaments. Only the G2 team and stanislaw to Liquid moves have been confirmed by the organizations, and the others are only rumors and reports. I elected to use thumbs up and thumbs down as opposed to out-of-five-stars or letter grades in order to rate these roster moves.

Thumbs up. Without a question, this is the best single lineup, on paper, that the French shuffle could have resulted in. With the superstar shox in the in-game leader position, he finally gets paired with one of the best AWPers in the game in kennyS, an experienced entry fragger in apEX, and a consistent well-rounded star in NBK. Rounding out the team is a potential star in bodyy, who at just 20-years-old, now has a chance to play with one of the best collection of teammates a young, developing player can ask for.

Will this squad equate to the Miami Heat’s big-three, a core of stars that won multiple titles and appeared in finals consistently, or the Kobe-Dwight Los Angeles Lakers of 2012, that hosted too much starpower and could never coexist? Maybe this team will be somewhere in the middle. While expectations for this team are obviously quite high, a roster of this caliber will hopefully excel.

A tentative and optimistic thumbs up. The remnants of the EnVy roster, Happy and SIXER, are reportedly joining forces with now former G2 player RpK on an all-new French roster that additionally features two young up-and-coming French players in LDLC’s xms, and Vexed’s devoduvek. Happy is still one of the game’s better in-game-leaders, and now has a roster that might be better than it looks on paper. While RpK struggled throughout the tail end of 2016, he had some strong performances at the major, and could be rejuvenated by a change of scenery.

This roster gives SIXER a chance to return to the AWP, and devoduvek has shown the ability to produce consistently in his short time with Vexed. It won’t be easy for the new lineup, especially with the very young xms being so untested, and if RpK reverts back to his slump, or SIXER doesn’t break out like many expected, we could see a much larger gap develop between the two French teams performance-wise.

A thumbs up for stanislaw to Liquid. The addition of stanislaw to a roster that was not too long ago considered the best in North America is a huge step forward for Liquid. With Elige and Pimp emerging as the true stars of the team, and with JDM stepping forward as one of the more consistent AWPers in the region, the only thing missing was leadership. With stan leading OpTic, the team began achieving success months ahead of schedule, alongside the development of mixwell and the addition of tarik.

While it certainly was a disappointment to see OpTic exit the major so early, the departure of stanislaw surely caught the Green Well off guard, but the Liquid organization and fans couldn’t be happier with this acquisition.

A thumbs down for Hiko to OpTic. If this stan-for-Hiko trade is true, seeing as he’s been removed from the Liquid lineup, OpTic ends up on the losing end. With stan’s departure, OpTic’s biggest gap is now obviously their leadership, and Hiko is not the most qualified in-game leader available to them. Hiko’s in-game leadership for Liquid existed purely out of necessity, and you can see the flaws in their shot-calling and decision-making during their ELEAGUE major run.

If I’m OpTic, my goal would be trying to lure a player like AdreN away from the Mythic roster, offering a chance to upgrade to a higher-tier team that doesn’t have to slog through open qualifiers just to go to big events. Regardless of whether or not AdreN is even interested in leaving that roster, it’s at least worth the time to make a call and gauge his interest.

While Hiko is historically one of NA’s best players, and one of the most recognizable names in NA CS, he’s coming off one of his worst years ever, most notably during the last few months, and I don’t think he’s the right fit for a talented OpTic team that’s still developing.

Thumbs up for North. Without question, North comes out on top if this swap comes to fruition. Not only can they remove their weakest link in Rubino, upgrade it to aizy, but this also makes their roster all-Danish, which their F.C. Copenhagen owners have got to love. While Rubino is by no means a bad player, he’s not producing as well as k0nfig, cajunb, or Magisk. He’s only outperforming MSL, who’s the in-game-leader.

Thumbs down for MJFox. Rubino joins the original G2 trio of Maikelele, jkaem and fox, with the fifth spot still up in the air. This trio did not perform well initially, and that was with aizy and rain in the mix as well, and they’ll be adding a player who was just replaced by aizy. Fox has been playing well, but that was alongside SK Gaming, and Maikelele’s only stand-out performance in recent memory was from when he stood-in for NiP at StarLadder.

Thumbs up for FaZe. This leaves ScreaM allegedly going to FaZe after he stands in for EnVy, and given that FaZe has figured out the formula to win with their collection of talent, adding one of the top-10 players of 2016 raises the bar for the FaZe Clan. Already Legends with spots in the next major, both FaZe and North look to stay competitive as French CS enters the era of the superteam.