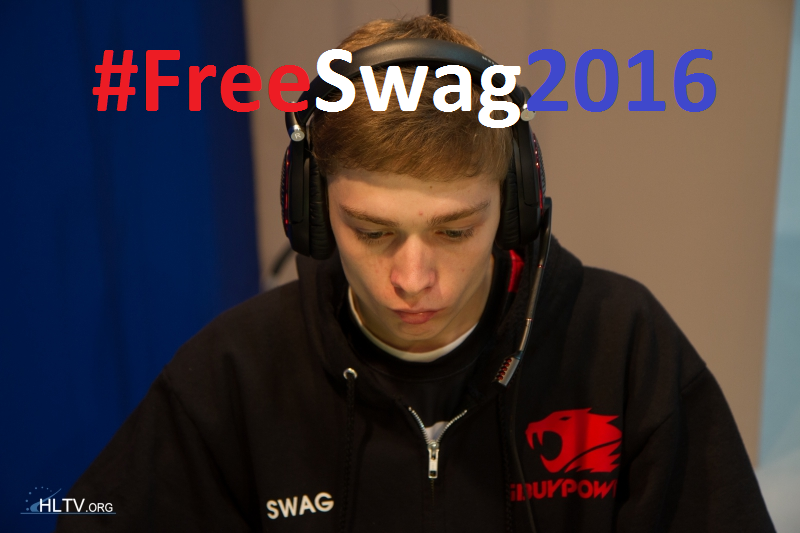 HLTV has announced that Cloud9 Swag (formerly of iBP who is currently a banned player by Valve for match fixing) will be stepping in for SeanGares at the upcoming RGN Pro Series Championship. The fact is Cloud9 has not been “all there” these past few months and something needed to change. Whether this situation is purely a coincidence or a planned trial run of the potential 2016 Cloud9 line up, getting Swag back in action is a positive for Cloud9. The lineup they have been running is just not working.

I previously wrote about Cloud9’s struggling mentality; I believe bringing in Swag for at least one event will bring some fresh air to this team: especially, mentally speaking. We all know Swag can frag. The statistics back this up, a comparison of stat’s:

See the difference? That’s a 0.25 rating swing and 0.33 K/D ratio difference. And this will have a dramatic effect on the rest of the players on Cloud9. Their confidence levels should be elevated at this event partly because they know they have another solid fragger. The other factor being that Cloud9 wants to have a good event for Swag as they do not know if he will be unbanned by Valve.

Be real, we’ve all done things that we shouldn’t have. Some of us were lucky not to get caught when those things occurred, some of us weren’t.  If you thought about it, I’m guessing these stupid acts probably occurred when you were younger too. Well, that’s Swag. He made a stupid and regrettable decision at a young and naïve age. Something I’m sure that has haunted him for over a year now. From my perspective, Swag was not the mastermind behind the match fixing scandal. However, that did not stop him from getting caught up in it. Ultimately he is responsible and he has acknowledged it and apologized for it. But part of you has to feel for the guy. The fact is he was ~17 when the event occurred. Two of the leaders on the team, dazed and steel (people who he probably looked up to), were veterans of the counter-strike scene and here they were telling Swag that it was a throw away match, that it would help some friends make playoffs and there was an opportunity to make some profit from it to. From my understanding there was some hesitation on Swag’s part but again being young and impressionable, Swag eventually caved to the plot. Now, just for a second, put yourself in Swag’s shoes (not knowing the outcome that we currently know). You’re telling me you would have stood against two of your teammates (leaders)? I don’t think so and neither should you. Counter-strike is a team game; part of the reason people play it is because they enjoy playing with their teammates: bonds are built between players and you ultimately learn to have each other’s backs. So at the end of the day when two players come up with a plot and they won’t let it go, eventually you cave.

In my opinion at the start of 2016 Swag should be unbanned. He served his sentence, just like anyone else who commits a crime. A lifetime ban for one proven incident is unjust (unless you are caught hacking). In fact I do not believe it exists in any other league. In baseball if you are caught using performance enhancing drugs you get 50 games, in the NFL you get 4 games, and in Counter-strike, when you use Adderall you get, … nothing? Maybe that’s an apple to oranges comparison (throwing vs. cheating) but I still think one throw is not a lifetime offense. Because the CS:GO scene was still growing, I believe this incident was the example Valve needed to establish. There were plenty of matches before this incident where it was suspected other teams threw for skins but this incident was the one where there was indisputable and a massive amount of proof. And thus Valve took a firm stance and sent a message.

I believe Swag learned lessons from this whole ordeal and I believe that he is truly sorry for being part of it (see excellent piece by Richard Lewis). I’m not so sure about the others. Maybe Azk as I do not believe he was a mastermind behind the plot either. So if you had to ask me about the unbanning time frame: Swag unbanned in January 2016, Azk unbanned in June of 2016 and the rest not even considered for unbanning until 2017. To me that sounds fair. The guiltier parties should pay more for their involvement in the incident. What do you think? Leave a response below or tweet at me. If you agree, let’s get #FreeSwag2016 with multiple mentions. If you’re a NA fan you should do this because while Swag may not be the savior for Cloud9, he certainly is a step in the right direction.

Food for thought: Ever since this incident occurred, it made me think of what I call the Peyton Manning rule. So seasons ago when Peyton Manning was on the Colts, he and his team dominated the division. By week 14 of 16, the Colts had locked up the division and would begin resting starters in the next 2 games. So I ask, is that intentionally throwing the game (not playing your starters/best)? The NFL determined that it wasn’t fair to the fans that paid good money to see the best product so they started scheduling divisional opponents the last few games of the season. But let’s now apply this scenario to the iBP incident. Suppose the iBP guys had still planned the throw in advance or even better, decided that they didn’t want to show off anything right before the coming ESEALAN. Remember, the match was a throw away match for iBP. They had already qualified for the lan. So the iBP guys played 5 guys at the A site for the CT half (not wanting to show defensive setups) and then rushed B every round on T side (not wanting to show offensive strategy). Would that be considered throwing? In my opinion if the iBP guys had played that way and even said afterwards that they intentionally did not run viable strategies on purpose so as to not show competition their strategies right before a big lan, they would not be banned. If a team is in the position where they don’t have to win a match (due to previous success in the season), they have the right to determine their effort level (The NFL agreed with this, which is why they made the necessary divisional-scheduling changes). However, these were not iBP’s reasons, which were: get Net Code Guides into playoffs and make profits via skin betting; the last being the huge offense in everyone’s eyes and that’s why Skadoodle wasn’t banned. He never made a bet.

There are now rules in place that prohibit players for betting; which was another effort to make sure this incident did not repeat itself. So between the rules and punishment that is currently being enacted out on the iBP guys, hopefully this curbs any team from throwing matches in the future. I can only say hope because of the classic saying “if you aren’t cheating, you aren’t trying and it’s only cheating if you get caught”. As long as skins have values, there will be plots to obtain them in infamous ways. As the CS:GO scene continues to grow I would predict that if it were to happen again it would happen with teams outside the top 20 rankings as they have much less to lose. As players get larger salaries with the big organizations, they will be less likely to do stupid things. Again, hopefully.