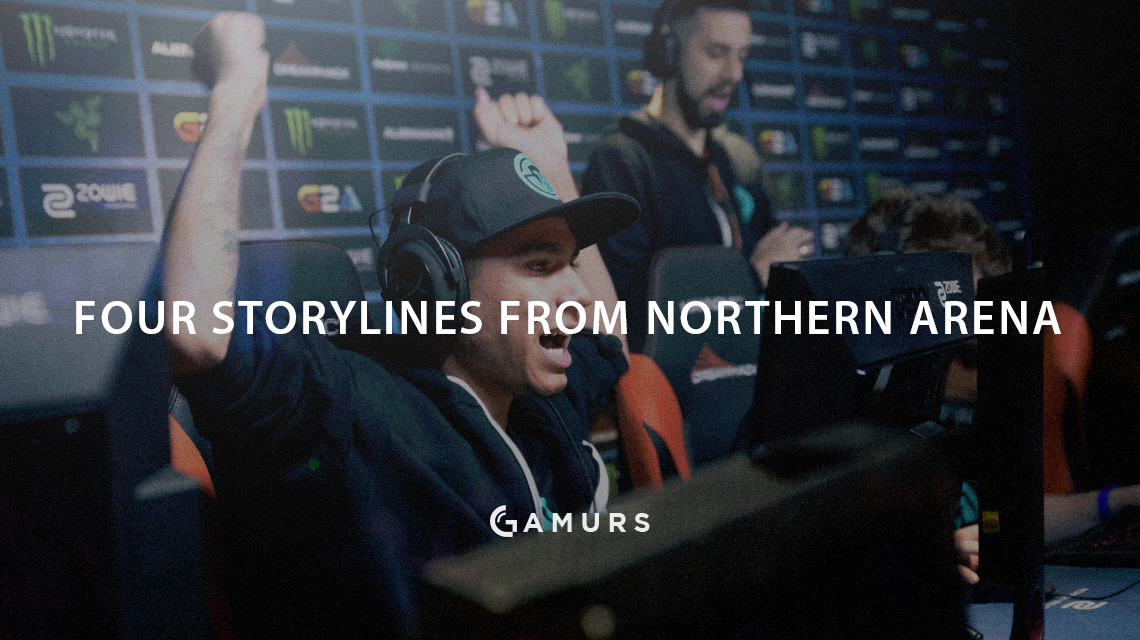 For better or worse, it seems that the Northern Arena 2016-Toronto event will be forever overshadowed by a plague of technical difficulties and poor administrational choices. Accordingly, since the event concluded on Sunday, the narrative has shifted away from the actual results, leaving the actions and stories of its participants more than somewhat obscured.

Despite the event’s abundance of problems, it would be foolish to completely divorce the results of this tournament from our considerations as it did add new depth and dimensions to several pre-existing storylines. At Northern Arena, the Cinderella story of a multitude of newcomers were dashed, presumed-to-be contenders were disappointed, and an unexpected mix of favorites and long-shots made their mark deep into the competition.

Since establishing themselves in 2016, Tempo Storm/Immortals have proven themselves to be a competitive team even on the international stage. They were hugely successful in several specific tournaments, such as CEVO Gfinity Pro-League Season 9, DreamHack Summer 2016, and this most recent event at Northern Arena, but they have shown some inconsistency at some events and weakness in others.

At the talent-stricken Second Americas Minor, Tempo Storm was able to best Team SoloMid, who were just at the start of their original upswing, but they fell to a still very unproven OpTic team twice in best-of-three series, denying them the complete tournament victory. Immediately afterwards at the ESL One Cologne 2016 Main Qualifier, the recently re-branded Immortals looked even more lackluster, losing to EnVyUs, TyLoo, and FlipeSid3 on their way out of the Swiss-style qualifier.

In order to eliminate their apparent inconsistency and move more towards their world-leading sister team, SK Gaming, Immortals dropped one of their worst performing players in Gustavo “SHOOWTiME” Gonçalves to add SK’s Coach, Wilton “zews” Prado, to the starting lineup.

While Zews’s apparent tactical prowess certainly was a welcome addition to the younger Brazilian team, it was the 28-year-old’s individual skill that made fans and commenters concerned. Despite his decade-plus tenure in Counter-Strike, Zews’s best result as a player came in 2006 at CPL Brazil, a bigger South American tournament where his team placed top-sx.

In CS:GO, Zews has found zero international success as an individual player. He was on an apparently national-leading team in ProGaming.TD, but was not a part of the merger between ProGaming.TD and KaBuM! e-Sports that led to the KaBuM.TD team who would appear at MLG X 2015 and would become the original Luminosity with Caio “zqk” Fonseca and Ricardo “boltz” Prass.

Despite the relative success of Immortals thus far this year in comparison to North American teams, it was actually Cloud9 rather the Brazilian up-and-comers who seemed to be the favorites moving into the tournament. While Immortals obviously had better LAN results than any other team in attendance, the addition of Zews and their somewhat lackluster online play coming into event stripped them of higher expectations.

At Northern Arena, Immortals had limited chances to prove themselves as their run to the finals wasn’t stepped with the best competition of the tournament. In their group, Immortals was paired with the newly strip-mined Counter Logic Gaming, the German-American mix, NRG, who has yet to impress on LAN, and the highly unknown Canadians of Synthetik Gaming.  Two straight wins over Synthetik and NRG sent Immortals to the quarterfinals.

From there, they dodged the tournament dark horse in Team Heroic, or their Second Americas Minor rivals, OpTic, or the favorite-usurping Cloud9, who all happened to find themselves on the other side of the bracket. Immortals, instead, faced Selfless and Echo Fox, both of whom were only considered to be mid-to-lower tier North American teams before the start of the tournament. Immortals won both matches, only stumbling once on Echo Fox’s specialty map, Nuke.

In the finals, Immortals came back from a 9-6 deficit to take Cobblestone, before taking their second map loss of the tournament in a close 16-13 contest on Train. Despite the highly controversial headphones debacle that erupted in the map’s early rounds, Immortals did close it out in a less-contested game three on Overpass.

Immortal’s relatively clean victory at Northern Arena neatly aligns with prior reputation, but future tournaments will demonstrate more clearly whether or not the new Immortals with Zews will remain inconsistent or make their way to the top like Luminosity/SK before them.

Since Sean “[email protected]” Gares left the team in late 2015, Cloud9 has not lived up to their former reputation. Earlier in the year with Jordan “n0thing” Gilbert taking up in-game leading responsibilities, Cloud9 looked significantly hamstrung on their T-side. To remedy that problem, they added Without A Roof’s in-game leader Alec “Slemmy” White, who had a notable effect on the team’s T-sides, but results continued to stagnate. Following their failure to qualify for ESL One Cologne and their loss to TSM at the ECS finals, Cloud9 did not swap out one of their outperforming “stars” in Tyler “Skadoodle” Latham, Mike “shroud” Grzesiek, or n0thing, but instead dropped Slemmy, apparently favoring firepower above all else.

Despite Cloud9’s underperformance thus far on LAN this year, recent success online in ESL Pro League and the recent CyberPowerPC Summer Cup following the pickup of Timothy “autimatic” Ta in place of Slemmy, led to somewhat bloated expectations for Cloud9 at Northern Arena.

Despite the hype, Cloud9 fell to Immortals in the controversial finals, but looking at all other results in the tournament, you could easily argue that Cloud9 looked nearly as impressive as Immortals over the course of the tournament.  Cloud9’s group was similarly weak with compLexity, Rouge, and Ace Gaming, but Cloud9 had to play a much more difficult quarterfinals and semifinals match versus CLG and Heroic respectively. Cloud9 cleanly swept CLG, but won a closer match versus an in-form Heroic, losing on Overpass before taking the series with victories on Train and Mirage.

Looking at the finals specifically, though, old problems did seem to reappear versus their toughest competitor. Cloud9 won just 17 out of 42 T-rounds, a number strikingly similar to pre-Slemmy 2016 performances. To be fair, that number is inflated by a 2-10 T-half on Overpass, where Cloud9 was actually able to plant the bomb eight times, showing their proficiency in sites takes at least. Perhaps the rapid rise of Jake “Stewie2k” Yip, their entry player who struggled in his first few tournaments in Cloud9 before the arrival of Slemmy, has helped alleviate some of their initial T-sides problems.

Cloud9 and Stewie2k will be tested by better competition this week at StarLadder i-League StarSeries Season 2.

Heroic Are Not One-Hit Wonders

The future of Danish rosters ex-SK Gaming and unu.AiN looked especially grim just a few months ago. unu.AiN were left in the wilderness following the dissolution of the Copenhagen Wolves organization in June, and similarly, ex-SK were dropped in favor of the world-leading Luminosity team, a move which deprived the Danes of their ELEAGUE spot.

Given their wayward circumstances and increasingly concentrated talent on Astralis and Dignitas, it seemed highly unlikely that Team X would ever amount to much. Even the equally unknown Rouge team, featuring Mathieu “Maniac” Quiquerez, Casper “cadiaN” Møller and Jesper “tenzki” Mikalski had higher expectations given name value of its players. Bizarrely at the Danish Power-LAN 2016, it would be Heroic who would best their older brethren to take home first prize. To win the tournament, Heroic personally eliminated both Astralis and Dignitas through wins in playoff best-of-three series, a highly unlikely feat given the middling success of both teams previously.

At Northern Arena, the new five man team swept their group by defeating Winterfox’s new Oceanic lineup and the ever-present Selfless, 16-14. From there, they beat OpTic in the quarterfinals who they defeated in a competitive 2-1 series. In the semifinals, though, Heroic would be defeated fairly soundly by the apparently improved Cloud9 in another 2-1 series. Heroic took the first map, Overpass, but were crushed on Train and Mirage, ending their LAN win streak. Rounding out their tournament, Heroic would brutally beat up an overachieving Echo Fox in the third place game. The Sgares-led team would only find six round wins across two maps.

Heroic hardly showed the same sort of prowess at Northern Arena in comparison to Power LAN with their third place finish, but they still had a handful of good results that should help establish them as a decent international team.

After their late April/early May roster changes, Echo Fox became a team entirely composed of well-known names or hyped talents, but without any results to back up their acquisitions. Off their own merits, Echo Fox qualified for zero LANs in 2016 from January to August, and at their one invite-dependent appearance on LAN at ELEAGUE, they failed to stand out beyond taking a single game away from a slumping Na’Vi.

Even by late August, there looked to be little hope for this team. On Aug. 27, Echo Fox attended the ESEA Season 22: Global Premier Challenge, which featured many highly unknown or underwhelming teams, such as g3nerationX, Chiefs Esports Club, PNDA Gaming, and an Allu-less ENCE Esports. Even at this less competitive competition, Echo Fox didn’t stand out, only making to the semifinals before falling to Crowns Esports Club, a Swedish team who previously competed as Publiclir.se.

At Northern Arena, Echo Fox had the misfortune of being drawn into a group with rising North American stars in OpTic and TSM, alongside the somewhat promising new Luminosity team, but they were fairly fortuitous moving forwards. Luminosity were unable to attend the event due to Visa complications and in their first match, OpTic looked highly distracted due to a slew of technical problems leading to a crushing Echo Fox defeat in back-to-back maps, giving them a fairly easy path to the playoffs.

In their second and final match of the group, Sgares’s Echo Fox faced off against Kory “SEMPHIS” Friesen’s TSM in an extremely close series. Echo Fox won their map pick Dust 2, 16-14, before TSM won their own map, Mirage, in another 16-14 nail-biter. Map three was Nuke, a pocket pick for Echo Fox. While Echo Fox eventually won the map handedly 16-9, they were benefited again by chance. TSM lost to OpTic and Northern Arena decided that the Group B tie-breakers would be determined by total-round losses rather than round differential, TSM were tasked with keeping Echo Fox under 10 round wins in the final map in order to advance out of the group. After losing a few CT-rounds, TSM trapped themselves in an endless series of force-buys in the hopes of minimizing Echo Fox’s round wins, a strategy which ultimately hurt TSM. Echo Fox won the map 16-9 to take first in the group.

A bit of luck and their first place seed allowed Echo Fox to face a stand-in laced compLexity in the quarterfinals, who they defeated in another 2-1 series. From there out, Echo Fox’s luck and run of form fizzled out as they failed to defeat Immortals and Heroic in the semifinals and the third place match respectively.

While Echo Fox’s surprising fourth place finish was undoubtedly aided by circumstance, they did defeat two outside tournament-contenders in OpTic and TSM, while also taking a game off of the eventual tournament champions, Immortals, in another Nuke victory. Echo Fox seem to have a decent collection of talent surrounding their capable in-game leader and their map pool, with Dust 2 and Nuke looks surprisingly sturdy, but for now, it’s hard to say whether or not this result will be seen as foreshadowing or a fluke from the clarity of hindsight’s vantage.

What were your favorite storylines from the Northern Arena LAN event? Let us know by commenting below or tweeting us @GAMURScom.