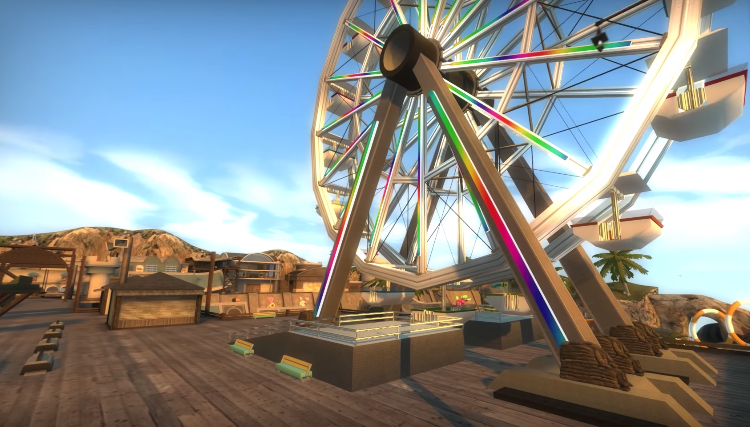 Fnatic has sponsored a new CS:GO map, and it’s perfect for practicing surfing on a blisteringly hot summer day.

The map, surf_summer, features a variety of easily recognizable summer scenes, such as a palm tree-filled beach, a larger-than-life sandcastle, a boardwalk, a skate park, a water park, and even a player lounge near the surf entrance. The map also has its own interactive Fnatic fidget spinner near the player spawn.

Upon entering the surf “waves,” a jolly tune plays in the background and the sun lightens the mood as you take your first strafe jump into the map. The first few stages are fairly short, as the focus on the initial surf portions seems to be on the scenery. Players from Fnatic’s CS:GO team are also displayed early on with their Major trophies from 2015, when they won ESL One Katowice and ESL One Cologne.

When you get to the later stages of the map, floating surfboards, popsicles, and ice cream treats fill your field of view with a multitude of bright colors. The harder parts of the map can be found towards the finish, since the map creators wanted it to be for both beginner and advanced surfers. To conclude the map, players must surf up and down several water slides in breakneck fashion.

You can download surf_summer in the CS:GO Steam community workshop. Once the map has loaded, you can “exec” your favorite surf configuration into the developer’s console and begin your time trials. The map will be playable in public community servers in the browser later today. Surf’s up, dudes.