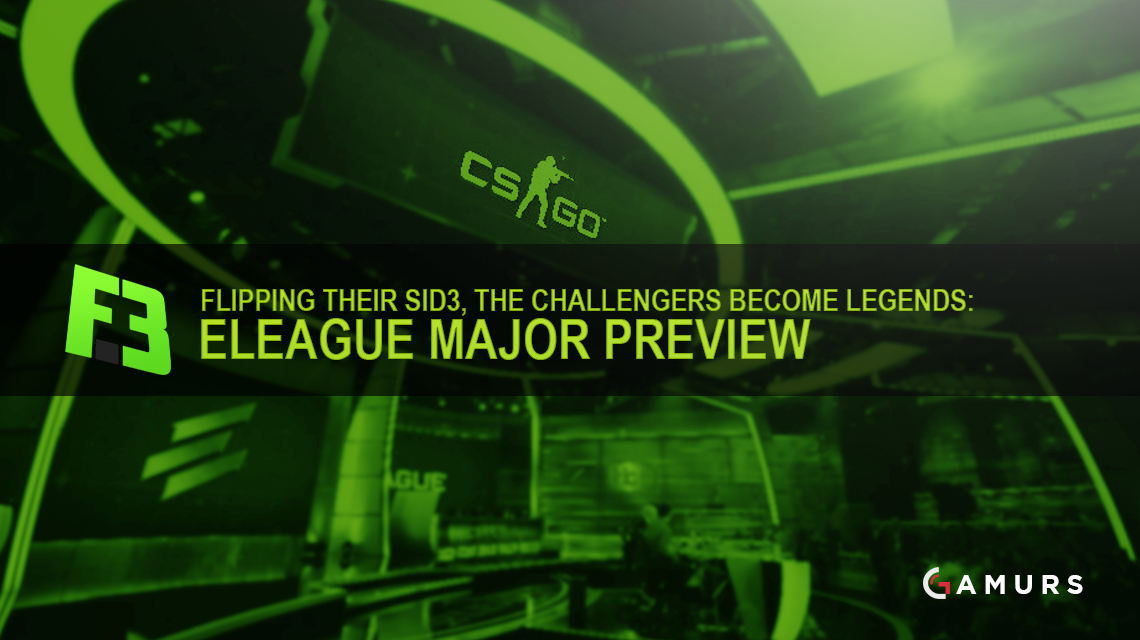 FlipSid3 Tactics (F3) find themselves in a new realm this year as the ELEAGUE Major comes ever closer, with the team approaching the tournament as Legends of the previous Major tournament held in Cologne. They can thank their top-8 finish in Cologne that they didn’t need to progress through the Major Main Qualifier, which teams of NiP and Cloud9’s calibre couldn’t escape from. One question that needs to be answered as we look at their chances in ELEAGUE’s first Major tournament, hosted in Atlanta, is “how did they get to where they are?” Was their top-8 finish in Cologne a fluke, what shape will FlipSid3 be in and can we expect them to repeat their miraculous placing in Cologne?

Cast your mind back to July of 2016, and you might remember the prelude to the Cologne Major. The second $1,000,000 Valve-sponsored Major tournament had a number of teams of that seemed guaranteed to advance to the playoffs, such as SK Gaming, Na`Vi, Virtus.pro, NiP, Astralis and so on. One name that, deservedly so, was not bandied around the list of elites was FlipSid3 Tactics, having been placed in a group that featured titans of the game Natus Vincere and NiP thus causing the team to be overlooked. With all the hype of the group stages focusing on the “Group of Death,” which would see one of Fnatic, G2 Esports or SK Gaming go home in groups, not a whole lot of thought was given to FlipSid3’s chances of advancing to the playoffs and earning the right to call themselves “Legends.”

The group started off as you might have expected: Na`Vi dispatched FlipSid3 with relative ease through a one-sided 16-7 scoreline. Next for FlipSid3 came the battle of the underdogs in their group; the game that should have been their only real chance at a win in the tournament, a match against OpTic Gaming. F3 narrowly overcame the Green Wall 16-13, while providing a real spectacle for the least anticipated match in the group thus placing them in the group decider match against NiP. Being a best-of-three against the former Major winners, F3’s chances were seen as slim-to-none as the consensus opinion was that the experience, skill and synergy of the legendary NiP would emerge victorious as they have done so many times before.

This being said, looking close enough at the match there were signs that could suggest a F3 upset was more than a slight glimmer in an ideological fan’s eye. FlipSid3 and NiP found themselves in the same group at ESL One Cologne for the second Major in a row, as they battled in Columbus earlier in 2016 in a best-of-one, a game that went overtime. NiP ultimately took the game, but FlipSid3 took the Swedish Kings to overtime on Cache, a home map for the Ninjas. It showed that F3 had the strategy to almost overcome some of the best teams thanks to the perceptive in-game leader Andrey “B1ad3“ Gorodenskiy leading the cavalry. F3 almost beat NiP in Columbus and were certainly capable of repeating in Cologne.

FlipSid3 took their series with NiP a step further than they did in Columbus when they met again in Germany, winning the last two maps of the series and advancing themselves to the playoffs, and becamed labeled “Legends.” The map of Cache was far from an even affair for the two teams this time around, with FlipSid3 outclassing NiP in every way on it and crushing the Ninjas 16-2. Beating NiP was ultimately what earned the team their Legend spot at the ELEAGUE Major, and it’s hard to say it was undeserved. While it may have been a one-off, it’s a place that such a strong win warrants.

In regards to the ELEAGUE Major, what can we expect from FlipSid3 Tactics? They are sure to live up to their name and demonstrate a plethora of innovative and drilled tactics thanks to the seasoned mind of B1ad3. The team’s last offline showing was at the DreamHack Winter event late last November where they registered only one win during the event, though surprisingly this was against the champions of EPICENTER, Team Dignitas. F3 showed little else at the event, though a best-of-three offline win against Dignitas does paint them in good light. Realistically though, we can’t expect another playoff-reaching Major for the team.

The Swiss format could help teams of FlipSid3’s level score upsets and eventually progress to the playoffs, seeing as they avoid best-of-three’s which require a deep map pool. However, this doesn’t change the fact that F3 are probably the weakest team at the Major.

Their first match will be against the recently improved FaZe Clan who, since the arrival of Finn “karrigan” Andersen, have looked like an invigorated team. FaZe boasts a roster that can out-aim almost all of the F3 team and, due to karrigan’s involvement, now have the strategical prowess to accompany that aim. FlipSid3’s main hope of winning this match comes, like a lot of their potential does, from how well they can read their opponent and shut them down in the mental sector of the game. The matchup could be viewed as B1ad3 vs karrigan, as to prevent FaZe from stomping F3 through sheer firepower the tactics of the largely-CIS side will have to completely overshadow the fact that FaZe have them outgunned this fight, featuring stars such as Håvard “rain” Nygaard and Philip “aizy” Aistrup that have the ability to flip the game in their favour when one of them shows up.

The two teams clashed just yesterday in the DreamHack Masters Las Vegas Qualifiers, revealing some of what we should expect from their meeting at ELEAGUE. The first map went to FaZe, beating F3 on their map pick of Overpass before B1ad3’s team returned the favour and snatched Mirage from the FaZe Clan. The deciding map went to FaZe, but what FlipSid3 reinforced is that they have the upset potential to overcome not only FaZe, but other, stronger, teams at the Major than them. While they lost their best-of-three against FaZe, a map win suggests that F3 could benefit from the Swiss system by taking single map upsets against teams that ordinarily should beat them in a best-of-three.

Simply put, FlipSid3 should not be able to progress through the group stage. Their results in the Las Vegas Qualifier were promising, but the Major will be a whole different ballgame. Their undoing won’t be down to a huge fault of theirs, as the team is strong and consistently achieving decent results for a lineup that is void of any world-class players. What will cause their demise will be the quality of their opposition, as even since the last Major they managed to reach the top-eight while the quality of opponents increased. They have the small chance of reaching further than the groups, but beating three of the teams in this battleground of talent seems too far-fetched for F3. It’s regrettable, but I don’t see them reaching further than the group stages.

How do you rate FlipSid3’s chances at the Major? Let us know your thoughts by commenting below or tweeting as @GAMURScom.