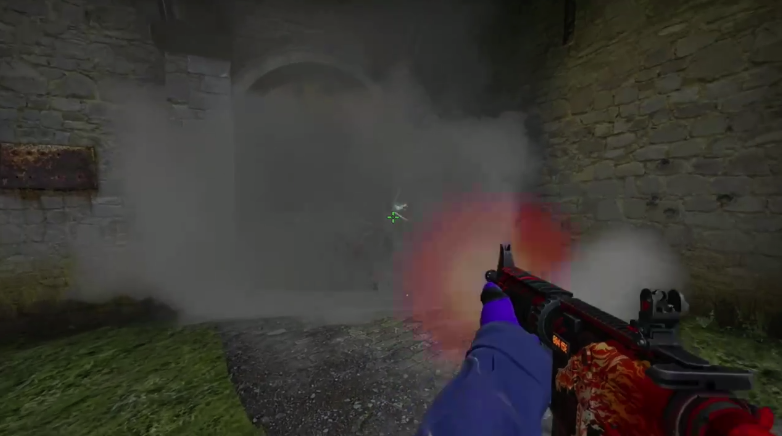 The first match of the day between SK Gaming and Cloud9, on Cobblestone, experienced a smoke bug early in the game.

Cloud9 was coerced into a force-buy on round three and planned to execute A site with a team split. Three of Cloud9’s players planned to push through a dropped smoke at bottom middle. Nonetheless, SK’s Fernando “fer” Alvarenga sprayed down three of Cloud9 while in the open, because he could see the outline of their player models through the smoke.

Cloud9 could’ve easily traded out fer and possibly taken the A site if fer were unable to see the three players beforehand. With fer dead, Cloud9 would’ve had a three-versus-two numbers advantage on A site over SK; instead, Cloud9 lost the round and continued to struggle for the rest of the half. SK closed out Cobblestone 16-7 after an explosive Terrorist side.

G2 spread out across banana, middle, and alternate middle with the intent of picking off players from Cloud9. Shox positioned himself at the woodstacks on banana expecting Counter-Terrorist aggressors, but Timothy “autimatic” Ta threw a perfect molotov that landed at his feet to flush him out from his position. Shox attempted to extinguish the fire with a smoke, but later realized that the smoke bounced off of the burning ground. Despite bunny hopping out of his position, shox fell to the molotov as the lone Terrorist at banana.

Cloud9 gained banana control and trapped G2 at middle map. If shox were alive to pick off autimatic and Jake “Stewie2k” Yip, G2 could’ve easily won the round with a fast rotation from middle onto B site—because the remaining Cloud9 players were aggressing towards the middle lane. G2 were on an eco save the next round and failed to gain any momentum in the rest of their Terrorist half, ending at 11-4. Cloud9 concluded Inferno with a comfortable 16-4 scoreline.

Hopefully no more matches will be affected by potentially game-changing bugs this week.