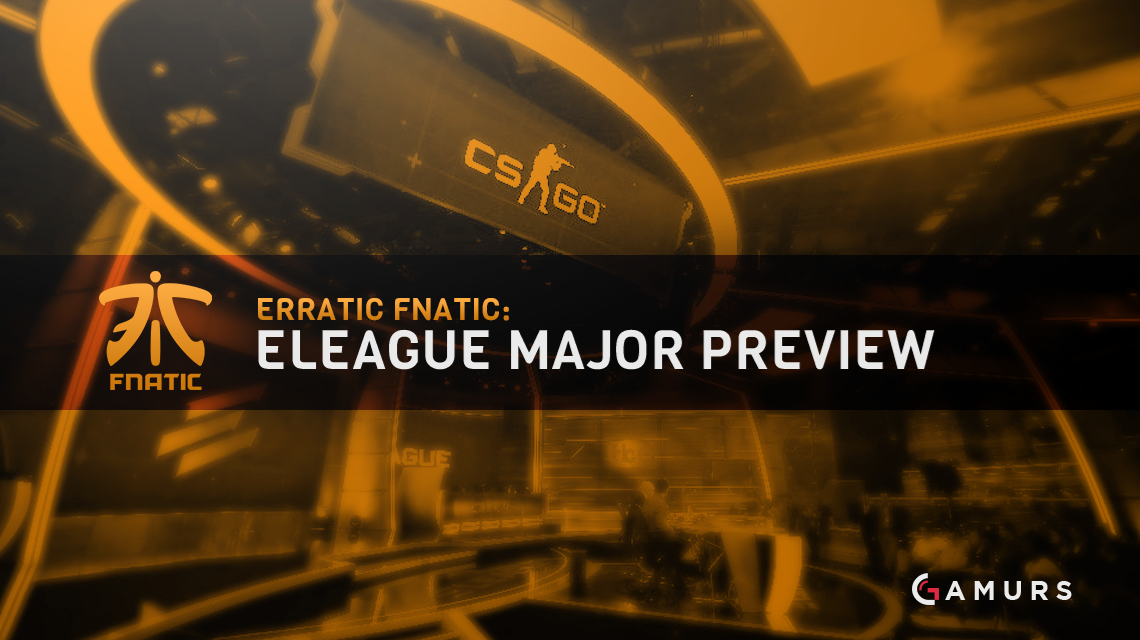 FNATIC’s reputation as “the villains” of Counter-Strike dissipated in the time between ESL One Cologne 2016 and the first ELEAGUE Major.

The stakes were higher than ever for FNATIC as they attempted to repeat their storied revelry as champions of 2015’s Cologne Major. Despite the challenge, FNATIC trudged on from group play to the playoff bracket by knocking down FaZe Clan, G2 Esports, and Gambit Esports along the way. The Swedes were later swept by Oleksandr “s1mple” Kostyliev and Team Liquid in the semifinals to end their run at the 2016 Cologne Major. FNATIC’s defeat to Liquid in the semifinals left them with a top-four finish and Legend status for the next major. FNATIC’s defeat in the semis left fans yearning for an SK Gaming vs. FNATIC matchup, a battle of 10 of the greatest titans to touch Global Offensive. The Brazilian quintet of SK Gaming trekked on to win their second major as a team at ESL One Cologne 2016.

FNATIC’s roster for the Cologne Major consisted of

Shortly after their disappointing loss to Liquid at the Cologne Major, FNATIC had the ELEAGUE Season 1 Playoffs on the horizon for glory reclamation. During the regular season, FNATIC concluded with a 9-2 record at third place just under SK Gaming and Team EnVyUs. The typically cocky FNATIC continued to the international group stage of the offline playoffs to face Team SoloMid and FaZe Clan.

TSM kept it close on Cache (16-12 win) and Mirage (11-16 loss), but FNATIC hushed them on Cobblestone (16-6 win). Against the ever growing FaZe Clan, FNATIC earned a 2-0 sweep thanks to a good performance on Cache (16-12 win) and an even better showing on Cobblestone (16-5 win). FNATIC made sure to carry their momentum into the playoffs of ELEAGUE season one with a couple of sweeps until the grand finals.

FNATIC held down the fort against Team EnVyUs and Natus Vincere with 2-0 score lines in the quarterfinals and semifinals, respectively. EnVyUs tried to show their worth, but failed with FNATIC-favored scorelines on Cobblestone (16-13) and Dust II (16-7). A pre-s1mple Na’Vi tried to do the same, but fell on Cobblestone (16-4) and Train (16-4). At that point in time, FNATIC looked unstoppable thanks to their diverse map pool, but they fell short against the Polish plow of Virtus.pro.

The ELEAGUE Season 1 grand finals of FNATIC vs. Virtus.pro showed FNATIC’s true colors as an uncohesive squad. Virtus.pro read FNATIC’s seemingly unstoppable Cobblestone play-calls like a book to leave the score 16-10 in the Poles’ favor. On Mirage, Virtus.pro dissected the Swedes piece-by-piece to finish off the failing FNATIC 16-8. Throughout both maps, FNATIC fans witnessed their team becoming flustered on camera, a sight seldom seen beforehand. At the end of the day, Virtus.pro brought home their second trophy of 2016 at ELEAGUE Season 1, leaving FNATIC furious as runner-up and Counter-Strike fanatics in shock.

A FNATIC in Shambles

Following ELEAGUE Season 1, FNATIC was confronted with some much needed contemplation. There had been a lot of tension and chemistry issues evident throughout the team as to who would be leading the charge as play-caller during matches. As a result of their ponderance, FNATIC made the most controversial roster change in the history of Counter-Strike.

On Aug. 15, JW, KRiMZ, and flusha decided it was time to part ways with the organization and join their former FNATIC teammate, Markus “pronax” Wallsten on the newly formed player-owned organization, GODSENT. Pronax and his re-united trio also added Andreas “znajder” Lindberg from Team Ancient to the roster.

Rönnquist discussed his sentiment on the trio’s transition from FNATIC to GODSENT in a Reddit post on /r/GlobalOffensive, which can be found in this summary. The biggest takeaway from his “Ask Me Anything” post was flusha’s explanation that “there was no ‘team’ [FNATIC] anymore, just five different players.”

Once the dust settled in the Swedish swap, FNATIC became “the conquered” within an empire in which they were once “the conquerors.” SK Gaming had taken FNATIC’s glorified throne and SK’s journey to the crown became the new headline. The Swedes forfeited their Legend status for the next major as only olofmeister and dennis remained from the 2016 Cologne roster (Legend status requires at least three players from the original roster). For a short time period, FNATIC’s roster consisted of

Although the future began to look grim, FNATIC still competed in several events without much time for making strategies. Their placings for the next few events were mixed as they struggled in a refractory period. Olof and Dennis had to experiment with in-game roles for several months before their jobs became slightly easier with the return of KRiMZ. Despite this, the Swedes’ performances towards the end of 2016 zig-zagged between the spectrums of average and poor. This can be assumed in the following placings:

KRiMZ made his return to the FNATIC roster in October prior to the team’s travels to Moscow, Russia for EPICENTER 2016 (where they placed top-six). He was then acquired from GODSENT in place of Lekr0. FNATIC’s major worries were then alleviated as they no longer needed to compete in the ELEAGUE Major Qualifiers throughout November and December for Challenger status. Later on, FNATIC decided to vacate wenton’s spot on the roster in place for Joakim “disco doplan” Gidetun (wenton would later join another Swedish team called Qwerty). Following Season 2 of the ECS, FNATIC began their preparation for the upcoming major for two whole months, which is a generous amount of time compared to what other teams had.

Even though they had their Legend status restored thanks to the return of KRiMZ, FNATIC could be perceived as more of a wild card team rather than a team to be reckoned with. Their upset potential, combined with the Swiss format in the initial stages of the major, could easily go in their favor. G2 Esports will be the Challenger that tests them in their first match of the major on Jan. 22. If Olof, Dennis, and KRiMZ display their once lost villain side and use the Swiss format to their advantage, FNATIC has the chance to at least maintain their status as Legends. Who knows what FNATIC has up their sleeves? They could even have insane strategies similar to the olofmeister boost on Overpass.

FNATIC’s roster for the major will consist of:

Could FNATIC make a comeback at the ELEAGUE Major? Tell us your thoughts below or with a tweet @GAMURScom