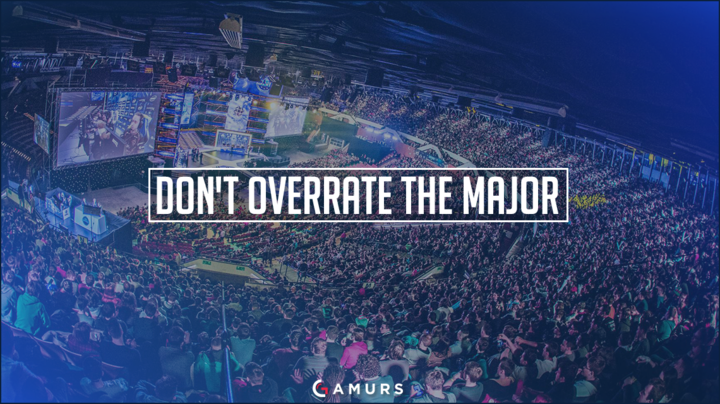 The ELEAGUE Major starts in two days with heavy bragging rights, eight Legends spots, and $1 million in prize money up for grabs. However, as the frequency of heavily-attended, high-production tournaments continue to increase in the ever-burgeoning Counter-Strike scene, the delta between a Valve major and other tournaments doesn’t appear to be as great as the prevailing community sentiment might lead one to believe.

Theoretically, the level of competition at a Valve major should be the absolute highest possible, given the extensiveness of their qualification system. Instead of the regional online qualifiers used by other big tournaments, Valve majors use a singular international LAN to determine spots and use smaller regional LANs, the minors, to determine the attendants of this main qualifier. But, of course, there are still flaws in this system, and most would argue that the field gearing up to attend the ELEAGUE Major is not the best possible field.

Much has already been said about the viability of “Legends” spots gained from a playoff berth at last Valve major, ESL One Cologne, to determine attendance at this ELEAGUE major over six months later. Thanks to these Legends spots, more middling teams like Team Liquid, Flipsid3, Fnatic, and Gambit will all be present in Atlanta, without having to play in the main qualifier. HellRaisers, who qualified through the main qualifier, alongside Liquid, Flipsid3, and Fnatic, are not top-16 rated teams, according to HLTV’s rating system, while Cloud9 and NiP, who are both rated in the top-10, did not qualify for the tournament.

Additionally, in terms of pure difficulty of schedule or strength of schedule, there doesn’t seem to be a significant difference between the Valve major and other well-attended 16 team tournaments. To win ELEAGUE, OpTic defeated two decent teams, EnVyUs and Fnatic, in best-of-threes in the group stage, while also racking up very respectable wins over mousesports, FaZe, and Astralis in the playoffs to take first place. While neither FaZe or Astralis were especially established with their new five-man rosters at the time of the tournament, both defeated a world-class team earlier in the tournament and were further vetted as top teams at the ECS Finals shortly thereafter.

To win EPICENTER, Dignitas won maps over G2, Na’Vi, and Ninjas in Pyjamas in the group stage and won best-of-three series over Fnatic, Na’Vi, and Virtus.pro to win the tournament. At the time, Virtus.pro was widely considered to be the best team in the world, and Na’Vi was very highly rated due to their then-recent tournament victory at ESL One New York over Virtus.pro themselves. To win the ELEAGUE major, a team would need to, very similarly, win three best-of-ones in the swiss style preliminary— the difficulty of which will somewhat come down to luck as pairing within specific pools will be randomized— and three best-of-three series in the playoffs.

But what makes the Valve majors so valuable for teams and players is the possible income gained through sticker money, which was a high as $4.3 million at ESL One Cologne 2015. However, that money isn’t distributed with respect to placings. Teams or players are compensated with a percentage of the revenue made from the sale of their own stickers. While in-game results should be somewhat correlated to the size of a team or player’s fan base, popularity far more than performance ultimately determines that payout. If anything, sticker money gives teams incentive to qualify for the event, rather than a high placing at the tournament itself, and while placing top-eight does secure your place at the next major and another round of sticker money, playoff wins are only rewarded through the far less lucrative prize pool.

At this Valve major specifically, it has also been suggested that because there has a been an extended break between the last talent-stacked tournament, ECS and the ELEAGUE Major, will allow the level of competition to be much higher. Certainly, we can acknowledge that the frequency of tournaments in the waning months of 2016 very much limited the ability of travel-heavy teams, such as Dignitas, to have proper practice time. For example, in October, Dignitas won EPICENTER in Moscow only to compete again three days later at the ESL Pro League Season 4 in São Paulo, where they were eliminated in the group stage.

At the same time, extended breaks from world-leading teams did not prove to be beneficial in the second half of 2016. In July, SK Gaming was the undisputed number one team in the world and took an extended LAN break to allow Fer to attend to a medical issue following their second straight major win. However, they did not look rejuvenated or even at full strength following their return in October. While they could always edge their way into a semifinals or finals, SK attended five premier LANs without a first place finish, as Virtus.pro and later Astralis took their place as the world-leading team.

Virtus.pro became the clear-cut scene leader in the fall thanks to their wins at ELEAGUE Season 1 and DreamHack Burcharest, in addition to second place showings at ESL One New York and EPICENTER. However, like SK, they too abdicated the throne at the height of their powers to find weaker results upon their return. After their month-long break in November, Virtus.pro made their return at ELEAGUE Season 2 and lost their opening quaterfinals match. Then, after another month long break for the holidays, Virtus.pro was underwhelming again at the talent-poor WESG World Finals, finishing just top-four with an upset loss to their far less intimidating Polish rival in Kinguin. While the data set is admittedly small, for top teams in the current landscape there is, at the very least, no evidence to suggest that taking extended breaks from LANs will lead to an improved form.

The last factor that has been suggested to raise the level of competition would be the prestige and high viewership that has been invariably attached to Valve majors. For now, it does seem that the significance of the event does still contribute to a more competitive atmosphere, but if the quality of competitors, tournament structure, and incentives for winning are not altogether different than other great non-Valve events, how long will that prestige continue to persist?